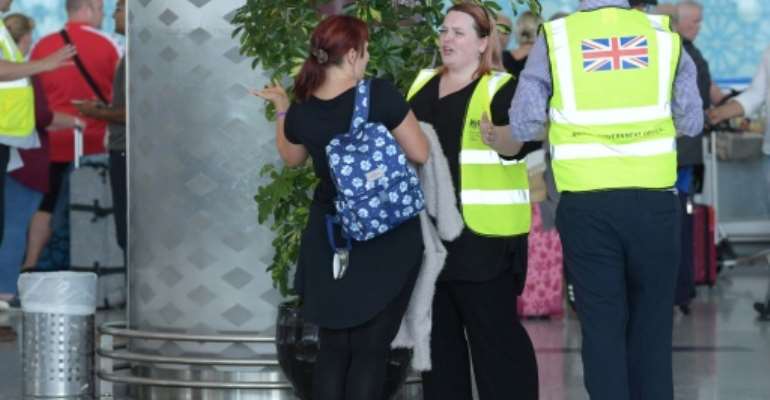 British officials talk to tourists booked with Thomas Cook as they wait for repatriation flights from Enfidha airport on the outskirts of the Tunisian coastal resort of Sousse. By FETHI BELAID (AFP)

Tunisia has set up a crisis cell to deal with the fallout of British tour operator Thomas Cook's collapse on Monday, which has left around 4,500 mostly British tourists stranded in the North African country, officials said.

Tunisian authorities said officials and tourism industry representatives from both countries were to meet on Tuesday with Tunisia's central bank.

Thomas Cook, which had suspended trips to Tunisia after deadly jihadist attacks in 2015, returned in force last year and in 2019 with around 100,000 bookings a year, mostly from Britons.

"We currently have about 4,500 British tourists in the hotels who will finish their stay as scheduled, and their repatriation will be paid for" by London, Tourism Minister Rene said on Mosaique FM radio.

According to his ministry, a British compensation fund is being prepared to also pay unpaid debts to Tunisian hoteliers, which local media have estimated at $65 million.

Managers of a hotel in the coastal resort of Hammamet briefly delayed the departure of a group of tourists until they could verify that payments owed by Thomas Cook had been made, an interior ministry spokesman told AFP.

The resort managers requested additional payments even though the group had already paid the costs of their stay in full, one tourist said.

"After an hour they left the hotel and are currently at the airport," said the government spokesman.

"There are other Thomas Cook groups in Hammamet, Sousse, Mahdia and Djerba -- all payment procedures have been settled."

Monday's bankruptcy, which followed a lengthy period of financial turmoil after a disastrous 2007 merger deal, left a total of some 600,000 tourists stranded worldwide, according to Thomas Cook.

The British government launched emergency plans to fly some 150,000 UK holidaymakers back home.