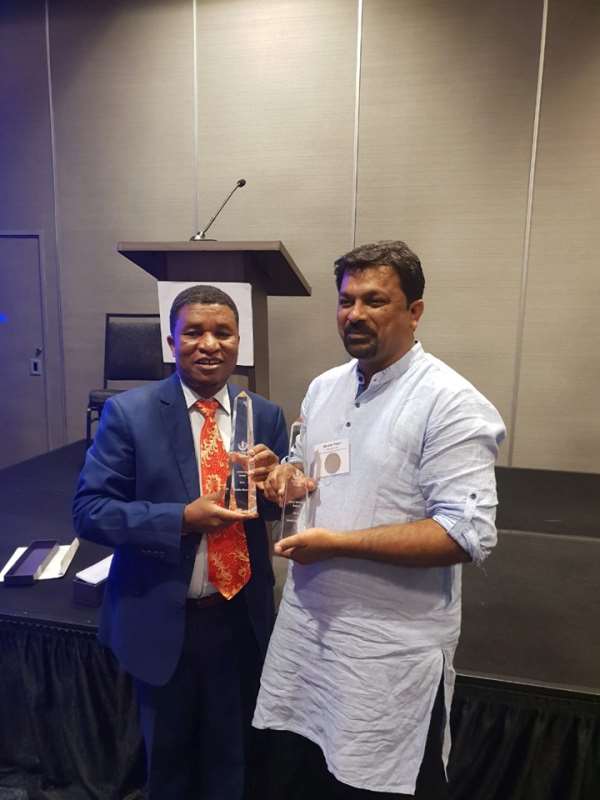 The Executive Director of the Pan African Justice Alliance (PACJA), Mithika Mwenda is this year’s winner of the International Earth Care Award.

The Award, for which he was named winner in July 2019, was issued at a ceremony attended by Climate enthusiasts from around the world in the Marriott Oakland City Centre in Oakland, California, USA.

While accepting his award, Mithika said he was humbled to have been nominated and finally awarded the prestigious recognition, and sought to share the win with his PACJA team and partners who had in one way or another helped him and the organisation achieved the few dreams that were being recognized by international organisations beyond Africa.

“This Award testifies that our cause is just. It reassures me that our efforts are not in vain. Its shows that despite the ups and downs, there is still strong yearning for climate action that is just and fair, particularly to the most vulnerable among us,” he said.

According to Sierra Club, which has several other international awards, the International – Earth Care Award “honors an individual, organisation, or agency distinguished by making a unique contribution to international environmental protection and conservation.”

Recipients of the awards are nominated by independent international teams.

Mithika said it was not yet time to celebrate and that the award was more of a motivation for him to continue pushing for climate justice, as those who suffered as a result of the climate crisis were the least contributors to greenhouse gas emission.

He admonished US President Donald Trump and other world leaders that have not purposed to enhance climate action, saying they had turned a blind ear to the reality of the climate crisis and even made a mockery of the achievements so far, but warned that sooner or later Mother Nature would revenge.

Mithika is one of the founders of the organisation that is present in 45 African countries. He was earlier this year named one of the 100 Most influential People in Climate Policy by Apolitical.

From September 20 to 27, 2019, Mithika and his organisation will join others in Kenya and around the world in the global climate strike that is aimed at condemning and “demanding an end to the age of fossil fuels”.

The Pan African Climate Justice Alliance (PACJA) is the largest, most active, trusted and most decorated alliance/coalition of Civil Society Organisations (CSOs) embodying one African voice on climate and environment justice. PACJA has over 1,000 members in over 45 countries in Africa.