By Emmanuel Akayeti
Listen to article

Naara or early millet is one of the most indigenous and important cereal crop in Ghana. In fact the five regions of the north have the greatest potential of growing the crop which is about the fourth most important cereal crop in Ghana. Naara is noted to be very reliable and used in almost every household in Ghana, until the introduction of maize in the recent years. Unlike maize that could not yield well without fertilizer, Naara can thrive with or without fertilizer. The crop is draught resistant that does not required much rain to grow.

Mr. Peter Asungre, the Pearl millet breeder (PhD student) and staff of the CSIR-SARI at the Manga Agricultural Research station in the Bawku Municipality of the Upper East Region. He explained that, there are two types of millet, thus early maturing (Naara) and late maturing (Zea) varieties. (are Whilst the botanical names for the early maturing ones are called Kaanati, Akad-kom, Naad-kohblug and Afribeh-naara and Waapp-naara , the botanical names for the late maturing ones include Salma I, Salma III and Langbense) With the early maturing variety, it takes about 70 to 75 days to harvest not to maturity. The traditional variety gives a grain yield of about 0.6 tons per hectare while the improve variety called “Afribeh-naara”, the least of them all in terms of grain yield, has a potential grain yield of about 1.9 tons per hectare and farmers can get about 1.2 tons per hectare.

These varieties are high yielding, very tolerant and resistant to some of the most dangerous crop diseases such as downy mildew known as crazy heads or Naad-komkoma. One can lose an entire field of crops to the downy mildew disease. The Waapp-naara millet variety is resistant whiles the rest such as (Kaanati, Akad-kom, Naad-kohblug and Afribeh-naara) are tolerant and chances of disease incidence is less than 5 percent. In the case of the indigenous varieties, downy mildew incidence can be as high as 40 to 45 percent and when planted late in the season, the whole field could be completely destroyed by the disease.

The current released varieties are the improved varieties that research has developed from the indigenous landraces. The first ever released naara which was introduced in the early 1970s known as Manga naara has been cropped over the years and have been faced with myriad of challenges from disease, pest and drought related problems and many farmers are falling out. The reason is to help preserve and adjust to the changing climatic conditions in order to prevent the varieties or landraces going completely extinct as our heritage.

Throughout the length and breadth of Ghana and many parts of the West African Sub-region, naara or early millet is widely consumed. It is used mostly in Ghana for Kooko (porridge), Foroforo (drinks for snacks) Maasa (deep oil-fried cake), Tuo-Zafi (TZ) for the main meal of the north. Naara is a rich nutritious grain crop with comparatively high levels of micronutrients especially Iron and Zinc. Until recently these potentials of the grain was not exploited. Millet grain is recommended for both pregnant and breastfeeding mothers as well as young females as a source of supply of zinc and iron in their blood.

Zinc and iron helps prevent anemia in children (infants) and pregnant women. Currently millet grain is used as infant formulae by multinational companies including Nestle Ghana Limited as a source of iron and zinc for babies. One of the current focuses of the millet breeding programme in CSIR-SARI is to come out with bird resistant material through the introgression of the brittle (spines or hair) trait onto some of the existing varieties that lack the trait. The presence of bristles on the panicle (head) of millet plants help to reduce, if not completely eliminate bird attack on the exposed grain.

One of the varieties recently released (Naad-kohblug) is bristled and currently serving this purpose effectively. Birds of late have become very distractive pest of millet crop that makes its farming unproductive in the Upper East, West and North Regions of Ghana where it has curved itself a niche due to the climatic conditions associated with the area. The second focus of the Research programme is to increase the zinc and iron level of millet grain for enhanced micronutrients of those that use it in their diets. According to a report released by Satyavathl and others in 2015, over 2 billion people the world over suffer from iron and zinc disorders.

This can cause anemia and prolonged anemia can result in permanent brain damage in the affected persons. The 2014 Ghana Demographic Health Survey report indicates that 42% of women and 66% of children under five years in Ghana are affected by anemia due to iron deficiencies. To overcome these challenges measures such food fortification, pharmaceutical, dietary diversification has been employed in the past but these have their own limitations. The current trend is bio-fortification through breeding and agronomic work.

Bio-fortification entails a breeding process that fixes the desired trait in the crop permanently so that anytime you eat the product you benefit from the fixed trait as well. In the case of micronutrient bio-fortification the iron and zinc levels are high in the proposed materials. In the light of this some varieties/breeding lines with very high levels of micronutrients such as iron and zinc were received from ICRISAT-Niger as breeding materials to augment the local materials.

The breeding work to improve the iron and zinc content of the local materials are in its advanced stages and it is hoped that in the next two to three years new varieties would be released and popularized in the country. It would be an opportunity for the government to add it to its planting for Food and Jobs as well as the School feeding programmes. If millet is well incorporated into the diet of the people, it may also go a long way to support government reduce the importation of nutrient supplements for use by Ghana Health Services.

Notable among these would be the zinc and iron supplementation to pregnant women and lactating mothers through the use of folic acid. The daily iron requirement of women in Ghana can easily be met with daily or regular consumption of millet based diets. Available literature suggests that grain of pearl millet accounts for the largest share of Fe and Zn intake in India and is the cheapest source of micronutrients compared with other cereals. There are evidences from other countries, especially India, that when a child is fed on the improve early millet for six months, the zinc and iron level required will be aptly adequate as compare to any other baby food.

The research is currently targeting the yield of the grain, zinc and the iron content and the prevention of birds from destroying the produce. There is no known millet variety the world over that can do well and matures in less than 65 days in Ghana.

Mr. Peter Asungre indicated however that, the Manga Agriculture Research Station intends to submit millet samples to Ghana Atomic Energy for eradiation as part of investigation to see if the maturity periods of the late maturing millet (these are photoperiod sensitive) could be reduced to take advantage of climate changes being experienced. These late maturing ones, locally called zea, is similar to the early maturing millet (Naara) variety but matures in about 120 days from sowing and flowering only occurs in August/September even if sown in January.

Mr. Peter Asungre stated that, one of the technologies of CSIR-SARI is the issue of relay cropping which involves planting two different crops in the same season and millet fits well in this technology.

This he said will enable farmers to cultivate early millet and harvest it before planting cowpea or early maturing maize in the same year in order to get enough food for their families and income to take care of their children’s education. Government currently has also introduced fertilizer subsidy for farmer but millet is not included thus making its cultivation unattractive. Given its nutritional importance and as staple food source in the five northern regions as well as its role as a climate smart crop, there is the need to improve and preserve the variety from going completely extinct. 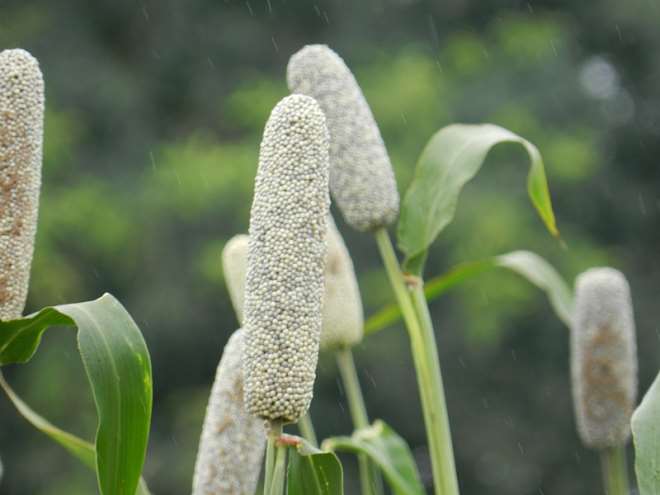 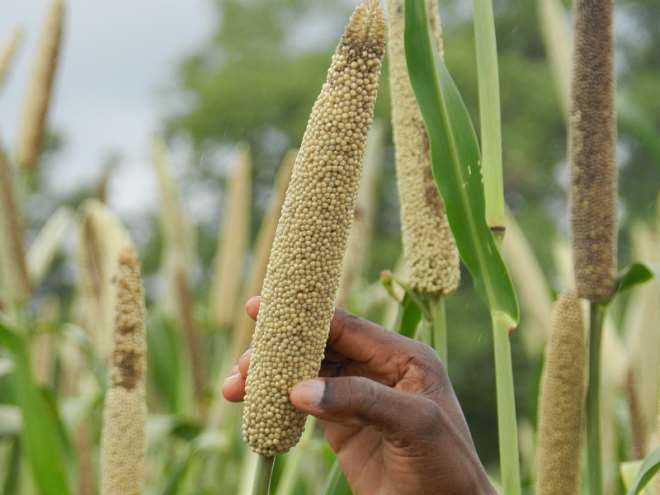 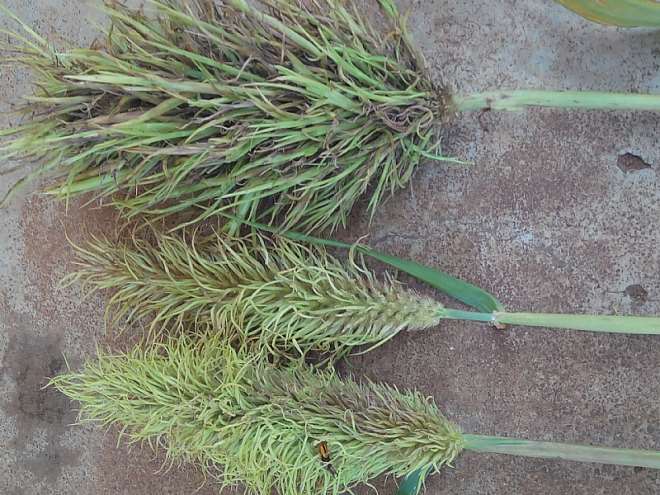 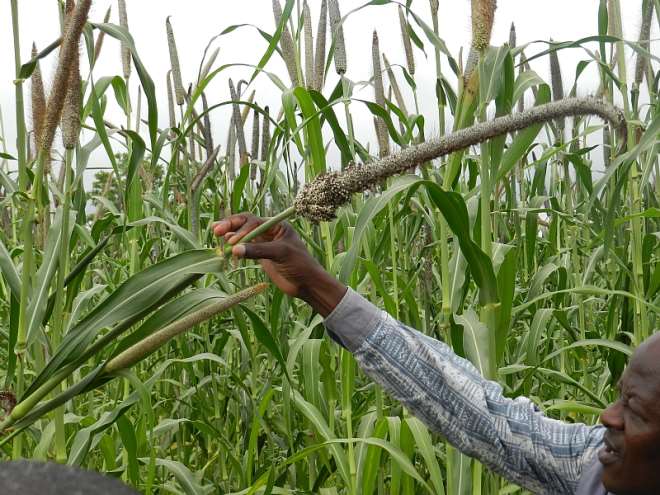 Infested Naara At The Field 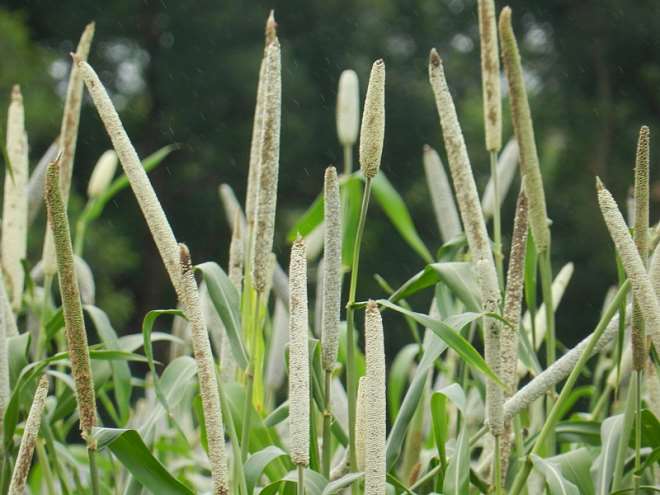 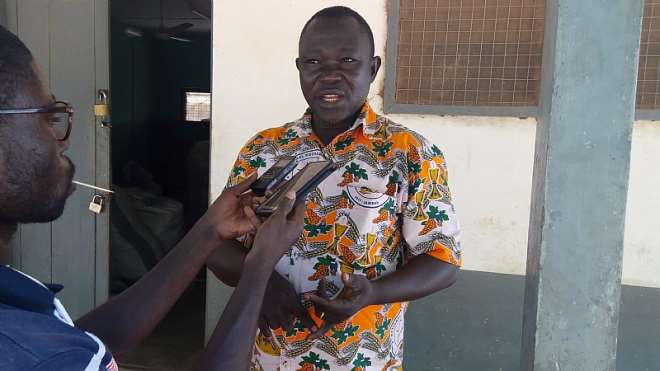 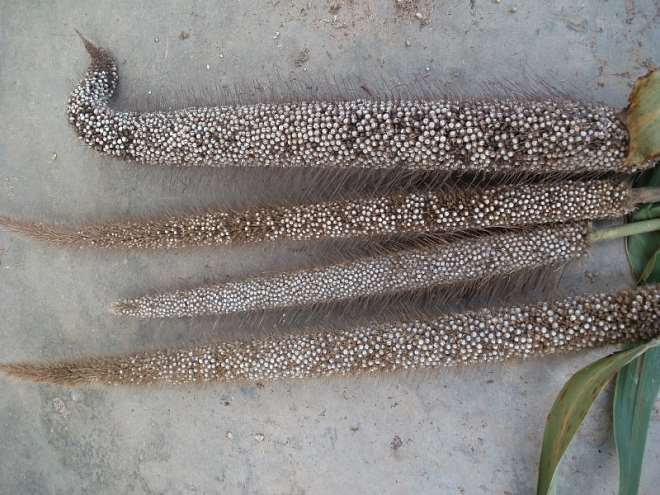 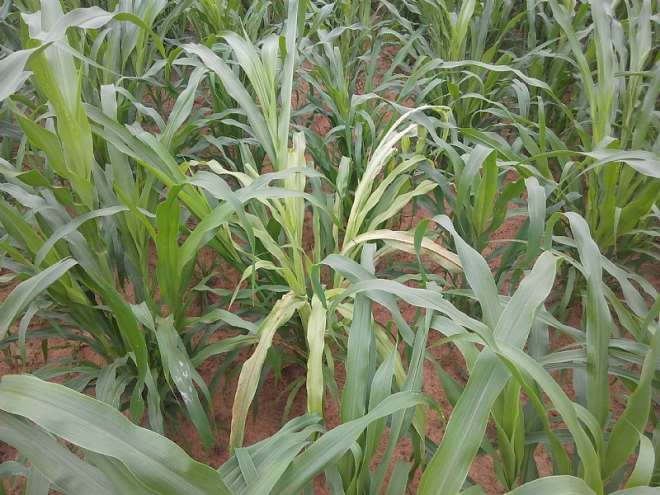 Naara The Early Millet At Its Earlt Stage (75 Days Maturity) 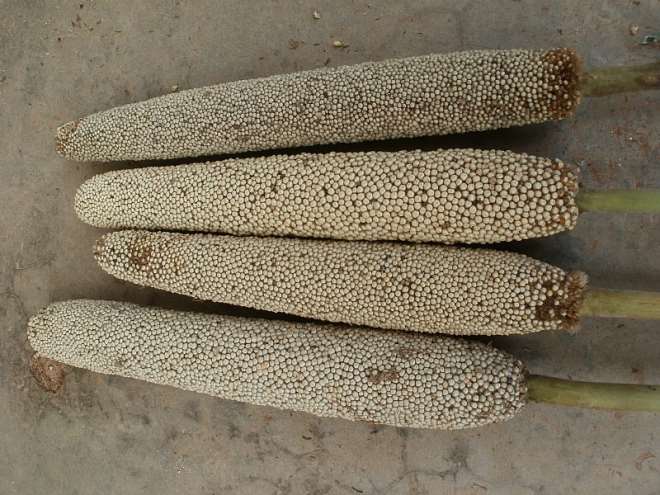 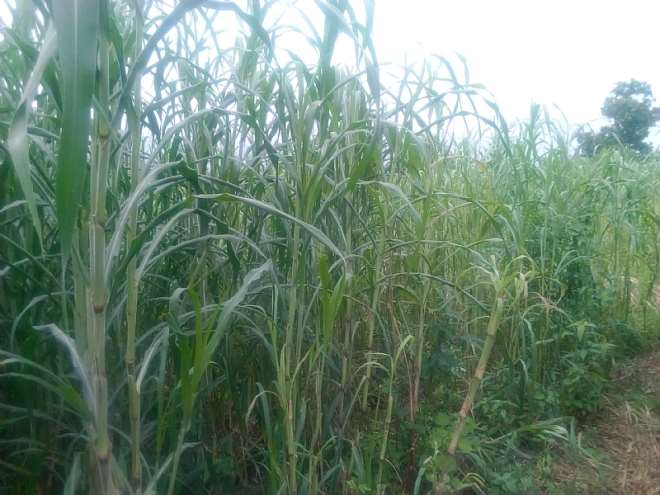