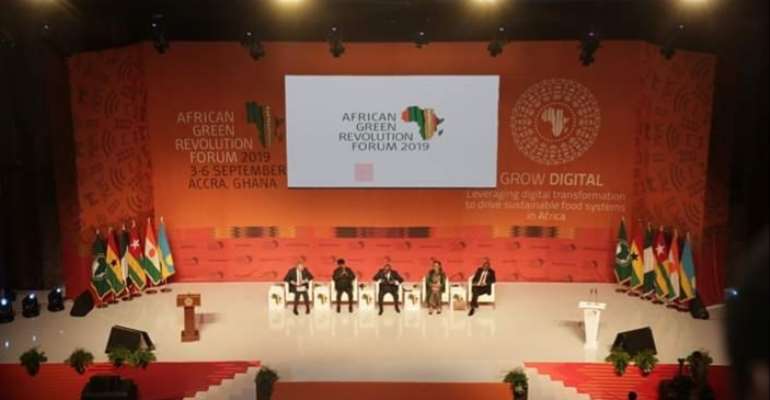 These are among the highlights of the 2019 African Green Revolution Forum (AGRF), which attracted some 2800 participants from across Africa and around the world this week for three days of intensive consultations in Accra.

“The potential benefits of the AGRF to the African continent are beyond contention,” said Ghana President H.E. Nana Addo Dankwa Akufo-Addo. “We must galvanize our collective resources and energy to fully exploit the opportunities it presents.”

AGRF is the world’s premiere forum for African agriculture, pulling together stakeholders across the agricultural landscape to discuss and commit to programs, investments and policies to achieve an inclusive and sustainable agricultural transformation across the continent. This year, the event returned to Ghana, host of the first AGRF in 2010. Ghana is also the home of former UN Secretary General, the late Kofi Annan, founder of both the AGRF and the Alliance for a Green Revolution in Africa (AGRA), and a leading voice for the power of smallholder farmers to drive major reductions in poverty across the continent.

Investing in Africa’s Most Powerful Farming Asset: Its Growing Ranks of Young People

A marquee commitment secured at AGRF 2019 was the announcement from the Mastercard Foundation to invest $500 million to launch a new Young Africa Works program. The initiative will provide a major infusion of capital to support the efforts of a new generation of young “agripreneurs” who are investing their talent in farming and other agriculture-oriented ventures.

“This generation is not just heeding the call, they are leading the charge and changing the narrative of the 21st century African farmer,” said Reeta Roy, the Foundation’s President. “Their vision of farming is more business-oriented and more tech-enabled.”

She said the $500 million commitment to Young Africa Works brings the Foundation’s total investments in African agriculture to $1 billion.

Here’s the Deal: Venture Capital is Gravitating to African Agribusinesses

This year’s AGRF featured a vibrant Agribusiness Deal Room that was a hub of activity, securing the Forum as a prime venue for connecting innovators with critically needed capital.

Some 17 country delegations presented investment opportunities worth in excess of $2 billion. The proposed investments, coupled with support from various stakeholders, is anticipated to impact more than 15,000 smallholder farmers and create seven million jobs.

The Agribusiness Deal Room at the AGRF was made possible with the support of core design partners, including the African Enterprise Challenge Fund (AECF), AGRA, the African Development Bank (AfDB), CrossBoundary, GAIN, GrowAfrica, the International Fund for Agricultural Development (IFAD), the Tony Blair Institute for Global Change, and the US Agency for International Development (USAID). The Deal Room also received advisory support from the World Economic Forum (WEF).

Embracing the Potential of Digital Innovations for African Agriculture

A prime example of the surge of agribusiness endeavors in Africa can be found in the rapidly growing world of digitally-enabled agriculture services, which are proving particularly popular among younger Africans. The theme of this year’s AGRF was “Grow Digital: Leveraging Digital Transformation to Drive Sustainable Food Systems in Africa.” AGRF 2019 featured a rigorous and informative series of technical assessments, policy analyses, and political discussions that produced a new level of consensus that could dramatically accelerate efforts to use digital innovations to make farming in Africa more productive, profitable, sustainable and inclusive.

The discussions were anchored by the presentation of the Digitalisation of African Agriculture report from the Technical Centre for Agricultural and Rural Cooperation (CTA) and Dalberg Advisors. Its key findings include the fact that some 71 percent of users of digital agriculture or D4Ag services across the continent are under 35. The CTA report found more than 90 percent of the market for digital services that support African smallholders remains untapped and could be worth more than $2.26 billion. The study also found nearly 400 different digital agriculture solutions are currently in play, serving 33 million registered farmers across sub-Saharan Africa.

The report estimates the number of registered farmers and the number of digital solutions are growing so rapidly that they are likely to reach the majority of the region’s farmers by 2030.

“Digitalisation can be a game-changer in modernising and transforming Africa’s agriculture, attracting young people to farming and allowing farmers to optimise production while also making them more resilient to climate change", said Michael Hailu, Director of CTA.

At the AGRF Presidential Summit, moderated by the Rt. Hon. Tony Blair, the former Prime Minister of the United Kingdom, African leaders discussed the different ways digital technology is becoming a fixture of the African farming landscape.

“When we talk about using digital technology in agriculture, it’s about de-risking the sector,” said Rwanda’s Prime Minister the Rt. Hon. Edouard Ngirente. He said Rwanda is using the new efficiencies available via digital tools to help farmers anticipate the impact of climate change, facilitate business efforts to manage value chains, and create accessible and affordable insurance products—all of which reduce risks associated with agriculture and attract new investors.

“Digital technology is getting easier and easier to manage, especially innovations like mobile payment platforms,” said H.E. Yemi Osinbajo, Vice President of Nigeria “Even the most vulnerable populations are able to use their phones to access mobile payment systems.”

In a related development, AGRF 2019 featured discussions with senior officials from the United Nations Food and Agriculture Organization (FAO) to create a new International Digital Council for Food and Agriculture to evaluate the latest advances in D4ag technology and facilitate collaboration among key stakeholders. CTA has noted that a stakeholder alliance is crucial for promoting greater investment, knowledge sharing and partnership building.

There was much discussion at AGRF 2019 about the need for investments in the basic infrastructure and data systems that will provide the critical foundation for D4Ag services. To that end, there was news at AGRF that the World Bank plans to invest US $50 billion in Transforming Africa’s Digital Economy.

The Bank is committed to ensuring every African, including every African business and government, is digitally enabled by 2030. The investments include support for broadband infrastructure; digital skill development; digital platforms; digital financial services; and digital entrepreneurship. One key goal is to double access to broadband services across the continent by 2021.

A New Alliance on Food Trade The AGRF 2019 featured the launch of the new Africa Regional Food Trade Coalition. The Coalition was developed by a large and diverse coalition of leaders from the public and private sector. They are building on the foundation established by the new African Continental Free Trade Area (AfCFTA) and market opportunities evidenced in the region’s $35 billion annual food import bill. The goal is to increase regional food trade via more predictable policies and mechanisms that encourage new agribusiness investments that capitalize on the rich diversity of farming ecologies across the continent.

A Regional Food Trade symposium showcased a number of data innovations that could help advance food trade in the region.

AGRF 2019 featured the launch of a provocative new report that busts a major myth of Africa agriculture: that there is a “missing middle” of small and medium-sized enterprises (SMEs) available to power the region’s food systems. AGRA’s 2019 Africa Agricultural Status Report (AASR) presented new evidence that the “missing middle” is actually a “hidden middle” of SME-powered agri-food supply chains that recently has experienced a “quiet revolution.”

The report found that today, millions of SMEs are sourcing directly from millions more smallholder farmers across Sub-Saharan Africa, accounting for 64 percent of the volume of food consumed in the region. The report noted that the rise of SME’s has been largely unrecognized by policymakers, even as it has bridged gaps that previously separated most small-scale farmers from commercial markets.

“SMEs are the biggest investors in building markets for farmers in Africa today, and will likely remain so for the next 10-to-20 years,” said Dr. Agnes Kalibata, President of AGRA. “They were not missing, just hidden.”

Rising to the Challenge of Climate Change Impacts on Food Production

AGRF 2019 closed on the cusp of the launch of a major new initiative from the Global Commission on Adaptation that is expected to feature a significant call to action for new investments and initiatives to help smallholder farmers in sub-Saharan Africa adapt to the impacts of climate change. In support of that effort, the AGRF delegates issued a Declaration on Increasing the Adaptation and Resilience of African Food Systems.

“We are facing one of the biggest challenges of our time,” said H.E. Hailemariam Desalegn, Former Prime Minister of Ethiopia and the new chair of the AGRF Partners Group and the AGRA Board. “It is a challenge we must own as leaders, policy makers, investors, farmers and business people.”

In a related develop, a coalition of donors and philanthropy, including the United States Agency for International Development (USAID), the United Kingdom’s Department of International Development (USAID), the German development agency GIZ, the Australian Centre for International Agricultural Research (ACIAR), and the Bill & Melinda Gates Foundation, announced a new initiative aimed at modernizing and sharpening the priorities of public plant breeding in the developing world. The CGIAR’s Crops to End Hunger initiative will provide farmers with a new generation of varieties that will help them adapt to climate change while enhancing the livelihoods of both producers and consumers.

Elwyn Grainger-Jones, Executive Director of the CGIAR System Organization, noted that CGIAR research centers around the world were committed to working as “one CGIAR” to provide a unified response to the “global climate emergency.”

“We have all heard many times that climate change is a perfect storm for Africa,” he said. “The challenge is to turn political statements into concreate action. This will be a major lift.”

New Home and a New Era for AGRF following a competitive bidding process, the AGRF Partners Group unanimously announced that the Republic of Rwanda will host the AGRF 2020 and serve as the long-term home country of the Forum going forward.

AGRF has taken place in eight different countries over the last decade, and will now adjust its approach. It will adopt a “home and away” model where the Forum will alternate between hosting the event in Rwanda in even years and different host countries across the continent in alternate years.

“We are honored to be the home country for AGRF and are committed to working closely and collaboratively with our many partners across Africa and around the world to ensure the continued growth and influence of AGRF as the voice of Africa’s smallholder farmers and agriculture businesses,” said Hon. Minister Geraldine Mukeshimana, Minister of Agriculture and Animal Resources, Rwanda.

About the AGRF AGRF is a partnership of institutions that care about Africa’s agriculture transformation. The AGRF Partners Group is made up of a coalition of 23 leading actors in African agriculture all focused on putting farmers at the center of the continent’s growing economies.

Partners currently include the African Union Commission (AUC), the African Development Bank, the African Fertilizer and Agribusiness Partnership (AFAP), the Alliance for a Green Revolution in Africa (AGRA), the Bill & Melinda Gates Foundation, CGIAR, Corteva, the Centre for Agricultural and Rural Cooperation (CTA),