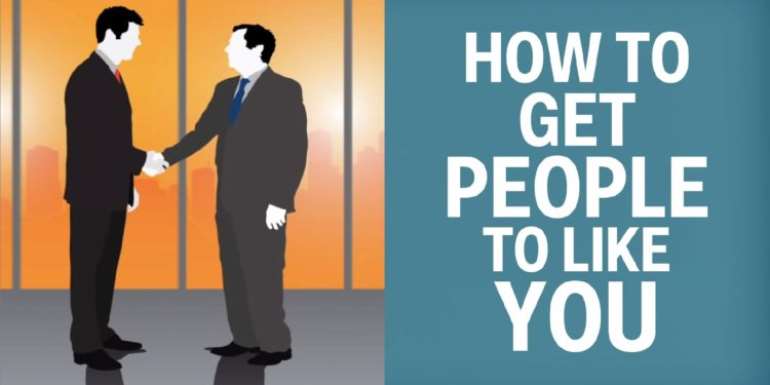 We might as well admit,we want people to like us. You may hear someone say I don’t care whether people like me or not. But whenever you hear anyone say that,just put in mind that the person is not really telling the truth.

Psychologists have stated clearly that one of the deepest drives of human desire is to be appreciated.The longing to be liked,to be held in esteem,to be sought-after,is fundamental in us all.

A poll was taken among some high school students on the question, “what do you desire most?” Overwhelmingly, majority of the students voted that they wanted to be popular. The same urge is in the older people as well. Indeed it is doubtful if anybody ever outlives the desire to be well though of,to be highly regarded, or to have the affection of his associates.

Be warned, however, that despite your attainments in popularity, you will never get everybody to like you.There is a curious quirk in human nature whereby some people just naturally won’t like you. Even the Bible recognizes this unhappy fact about human nature for it says “if it be possible,as much as lieth in you,live peacefully with all men”(Romans 12:18)

The feeling of not being wanted or needed is one of the most devastating issues of all human reactions. To the degree to which you are sought after or needed by other people will you become a fully released person.The lone wolf, the isolated personality, the retiring individual, these people suffer a misery which is difficult to describe. In self-defense, they retire ever further within themselves. Their ingrowing introverted nature is denied the normal development which the outgoing self-giving person experiences. Unless the person is drawn out of himself and can be of value to someone, it may sicken and die. The feeling of not being wanted or needed produces frustration,aging,illness.If you have a feeling of uselessness,if nobody needs you or wants you, you really ought to do something about it.It is not only a pathetic way to live but is seriously psychological.

However, there are certain formulas and procedures which if followed faithfully can make you a person whom other people like and appreciate so much.You can enjoy satisfactory personal relationships even if you are a difficult person or by nature shy and retiring, even unsocial. You can make of yourself one who enjoys easy,normal, natural and pleasing relationships with others. The principles of getting people to like you need no prolonged and labored emphasis,for they are very simple and easily illustrate their own truth.However,I list ten practical rules for getting the esteem of others.The soundness of their principles has been demonstrated innumerable times.Practice them until you become expert at them and people will surely like you.

1. Learn to remember names.Inefficiancy at this point may indicate that your interest is not sufficiently outgoing.A man’s name is very important to him

2. Be a comfortable person so there is no strain in being with others,be an old shoe,old kind of individual.Be homey

3. Acquire the quality of relaxed easygoings so that things do not ruffle you

4. Do not be egotistical.Guard giving the impression that you know everything or you know it all.Be natural and normally humble

5. Cultivate the quality of being interesting so that people will want to be with you and get something of stimulating value from their association with you.

6. Study to get the scratchy elements out of your personality,even those of which you may be unconscious.

7. Sincerely attempt to heal every misunderstanding you have had.Prain off your grievances.

8. Practice liking people untill you learn to do so genuinely.

9. Never miss an opportunity to say congratulations upon anyone’s achievement,or express sympathy in sorrow or disappointment.

10. Get a deep spiritual experience so that you have something to give people that will help them to be stronger and meet life more effectively.Give strength to people and they will give affection to you.