Death And Celebration Of Life Of Koffa Kro Naka Nimley: A Motivating Brief Autobiography Of A Unique African Mother From A Liberian Village 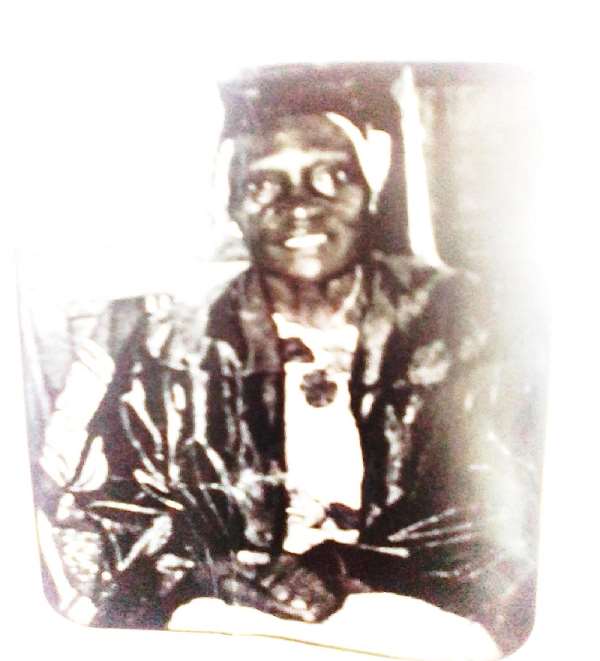 Many of us in life obtain high education, wealth, power, prestige, and fame; but when we depart this world, we leave no written document by us about our life. We leave the writing and telling of our story to others. And many times, family members guess the year and date of our birth and sometimes they fight regarding our funeral arrangements and over our wealth.

But Koffa Kro Naka Nimley, picture above and affectionately called Mother Naomi Harmon, refused to be part of that number. Born in a village in Liberia West Africa and with little education, she wrote and told her life story one year before her death for generations to know her history. In the last paragraph of her story, she instructed her family what to do when she dies.

She penned the instruction in her life sketch in June 2018. On June 20, 2019, she died in Monrovia, Liberia and was buried in Monrovia on July 13, 2019. She was 93 years old. She was of the Nyanfore-Nimley Family of Grandcess. The family deeply regrets her passing and celebrates her life, honesty, integrity, and love for family.

This was her instruction:
“When I leave this world, I do not want any family meeting for my burial. People should not be taxed or asked to make a contribution. I do not want too much preaching, only songs. People can give tributes, but not to honor me, because while I am alive, people do not honor me and they neither give me my flowers. Some family members never bothered to visit me. They can stay at home when I am gone if they like”!

She also selected the clothes that should be put on her at her funeral. On June 20, Koffa Kro Naka Nimley died peacefully. She was not sick. On the Saturday of her funeral, the weather was fine, the church was packed, as family members, church members, loved ones, and friends gathered at the Pattern Memoriam Methodist temple and sang songs to pay their last respect and to say goodbye. Some family members came from the US for the funeral. Her instruction was followed to the letter.

Here is her entire life history.
MY LIFE, MY STORY
BY KOFFA KRO NAKA NIMLEY
JUNE, 2018
My full name is Kro Nimley Koffa Harmon. My Kru name is Koffa Kro Naka Nimley. I was born in the municipality of Grandcess in Liberia on December 6, 1925, at 9 PM onto the union of Jlapokh Kro Nimley and Jlapigee Togbe Chea Ninja. My mother and father died when I was 11. I attended Saint Mary School in Grandcess at the age of 12 or 13. When I was about 14, my father’s aunt’s daughter, Kiah Jaywloh, later called Mrs. Mary Nyanfore Wilson, sent for me to live with her in Harper, Maryland County.

I and Mary Dweh lived with her. I lived with Aunty Jaywloh for about two years. She was then married to Isaac Yancy, Jr., the son of Allen Yancy and the brother of Ernest Yancy. Ernest became Liberian Ambassador to Israel in the early 60s. Allen Yancy was Vice President of Liberia under President Charles B. King in the 1920s but they were forced to resign in 1930, because of the accusation of their involvement in native slave labor practice in Fernando Po, a Spanish colony in Africa. President Edwin Barclay succeeded King that year; that was five years after my birth. Aunty Mary had two sisters, Viola and Sarah, who were residing in Pleebo, Maryland.

Sarah was married to Mr. Nah and had a son, named Hynmeih, I think. Viola married to Nah Wreh. I do not know if she had a child. Their mother was Gbeh or Martha Nyanfore and father was Dagbayonoh Kiah Nyanfore or Kiah, a Methodist pastor. He also born James Nyanfore, Sr., Aunty Mary’s youngest brother. He too became a Methodist pastor like his father. James born many children, including Dagbayonoh Kiah Nyanfore II, his first son, whom he named after his father, Kiah.

Mrs. Eva White, a Vai woman from Cape Mount County, who was married to Taylor White, wanted to have a child from Grandcess to live with them. We and the Whites were neighbors. I lived with the Whites until I was 20. I met my husband, Henry G. Harmon, while I was residing with the Whites. He was a Bassa man and was a goldsmith. He wrote the Whites and came to meet them and later asked them for my hand. They married me off. Our marriage lasted for 15 years or more, producing 4 children; 3 girls and 1 boy. Three unfortunately died, only one, Christiana, my first, live.

I stayed in Maryland until 1959. President William Tubman from Maryland was Liberian head of state that year for the third term after defeating Edwin Barclay in the 1955 Election. I then came to Monrovia in 1959 with Christiana. In Monrovia, I lived with my cousin David Chea Nyankan. I think he was then attending CWA (College of West Africa). I was doing sewing. I left cousin Nyankan and lived on my own on Ashmun Street behind Ducor. I worked as a seamstress at the TB Hospital for 25 years until I retired. I later learned that the land next to my house on Ashmun Street was owned by Aunty Mary Nyanfore Wilson. I do not know if she later sold the land or not.

I asked for retirement from my job because I was tired of chasing the bus which took us to work. The bus was always breaking down on the way. My sister, Ruth, joined me in Monrovia and lived on Ashmun Street in her own house. She left Grandcess at the age of 10 or 11 and lived with Mrs. Doris Banks Henries, who was at that time a missionary in Barclayville, now the Capital of Grand Kru County. But my grandmother took her from Mrs. Henries and sent her to live with Aunty Mary’s sister, Kiah Wanneh or Sarah Nyanfore mentioned earlier. From Aunty Sarah, Ruth went to a mission school in Grand Bassa County but the school closed down. So she came to Monrovia and lived with cousin Chea as I did. During those days, Grandcess children went to Grand Bassa missionary school. The county was the gateway to many of us in the Southeast to the capital city. In Monrovia, Ruth worked with the mental health hospital. She and her daughter, Augusta, were living together. We were a happy family. Augusta was attending Saint Theresa Convent while Christiana was going to CWA.

While I was working, I saved through a Susu, our traditional saving club for us, the country or native people. The saving enabled me to buy land, one lot in the Joe Bar area in Paynesville and to build a house in which I reside today. I bought the land because I was thinking about the future. Ashmun Street where I first lived was full of rocks, so I decided to buy the land which my friend’s mother, Elizabeth, was selling. She asked $500.00 for the lot. But I begged her for $475.00. City land was cheap then. But that amount was a lot those days. It would take you a long time to save that kind of money. I thank God that I was able to make the purchase. Today, I live on my own land, and I am happy. The area was basically a vacant land. There were about five houses in Joe Bar.

My husband and I stayed together until the civil war in which he was killed. In 1992, I went to America by the invitation of my nephew, Victor Nimley, whom I raised in Monrovia. I only stayed in the US for four months. I really did not like the place. I was lonely, staying in one place and having nothing to do, just watching TV and having no friends. Victor is the son of Samuel Nimley, my brother, who was the last of our father. He was four months old when our father died. He came to Monrovia and attended Saint Patrick. He met Marie Sherman who was a student at CWA. They later married and born 6 children, 2 died. Victor and 3 girls are alive. Sam died in 2000.

After Sam’s death, Victor invited me again to take me from the “mat”, which traditionally, is the mat of mourning of his father’s death. I stayed for a while. I returned to Liberia and remain to this date. I am resting and thanking God for the years and life I live. I have no regrets; I am pleased and content with what our creator has done for me.

My advice to the young generation is to know God, to have a love for their fellow persons; not only for their family members but also for all humankind and to be patient for God’s time is the best. I notice that the family is not as united as before. I do not know if that is because of education or what. The family now cares only for its personal self; parents and their children. There is no general family love, care, and togetherness.

I have lived long, and I thank our Lord. I have one biological child, three grandchildren, one nephew, three nieces, and a host of relatives. I am a Methodist. When I leave this world, I do not want any family meeting for my burial. People should not be taxed or asked to make a contribution. I do not want too much preaching, only songs. People can give tributes, but not to honor me, because while I am alive, people do not honor me and they neither give me my flowers. Some family members never bothered to visit me. They can stay at home when I am gone if they like! I am thankful and grateful to many family members, particularly my daughter Christina, nephew Victor, and niece Tonia Passawe for being there for me. I cannot reward them but God will bless and give all family members a long life.