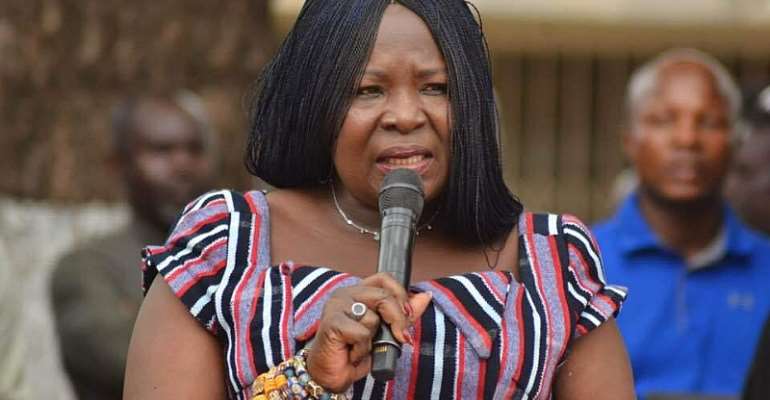 The Upper East Regional Minister, Hon. Paulina Tangoba Abayage has advised Public Servants across the region to put aside their political interest and serve the government of the day for their own good.

For any Municipality or District or community to develop, she said it behoves on the technocrats who are the Public Servants to support their political leaders with their technical know-how to bring massive development to their respective areas.

The Regional Minister was speaking at separate meetings with the staff of the various District Assemblies during her maiden official tour of the Municipalities and Districts to inspect government projects.

Being a trained teacher and later became a Public Servant, Hon. Abayage indicated that though with political ambitions, she served all political parties faithfully irrespective of which party was in power, and therefore charged the staff to do same.

Explaining the rationale behind her tour, she said just like the President does not sit in the comfort of his office and receives reports, she also decided to go out and inspect the social intervention projects being rolled out by the assemblies in line with His Excellency the President vision for the people.

In the Nabdam District, Hon Abayage inspected One-Village One-Dam project at Zuai where she advised the community members to take proper care of it to support them during dry season. She said the project would enable their animals to get water to drink and also encourage dry season farming.

The Minister visited a CHPS Compound at Sakote which has a residential accommodation attached serving a large community and she promised an additional accommodation facility to attract more health workers to serve the community.

At Talensi District, the Minister commended the District Chief Executive, Dr. Christopher Bobil for the construction of Awaradoone CHPS Compound that has Maternity Ward, OPD, Reproductive Child Health (RCH), Labour Ward and Dispensary with accommodation within sex months for the community.

At the end of the tour, the Regional Minister expressed a great satisfaction about the projects and added that their location in the rural areas would bring a lot of development to the rural folks especially the One-District One-Ware house which is 95% complete to store the farm products in order to help farmers get value for their products.

Naab Mobil Akuonzure chief of Zuai who was represented by one of his elders was grateful for the visit of the Regional Minister as the first ever Minister to step foot in the community and thanked her for the construction of the Dam, also the construction of a bridge that links their community to another where their children attend Junior High School.

He also asked for ICT facility for the school to enable their children who write ICT paper meanwhile they have not seen computer before.

Election 2020: Pray For Ghana Against State Of Emergency, Ci...
11 minutes ago

Salary For Assemblymembers Possible, I'll Cut Down The Size ...
27 minutes ago