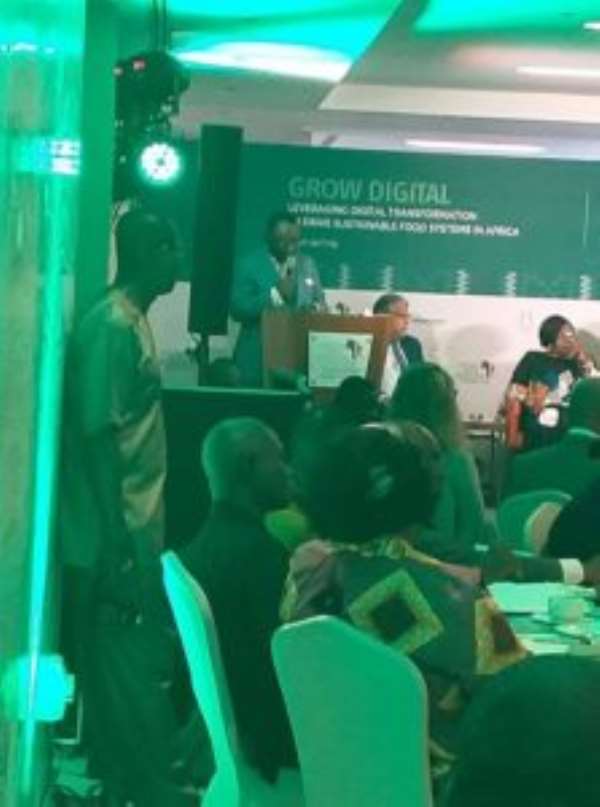 More than 2300 delegates have gathered in Accra, Ghana for the 10th edition of the African Green Revolution Forum (AGRF) which runs from 3-6 September.

The AGRF is the world's premier platform for dialogue and action on various topics around the future of African agriculture. Ghana is the first country to host the event twice, after the successful inaugural edition of 2010.

This year, H.E. Nana Addo Akufo-Addo, President of the Republic of Ghana, and his peers from around the world will shape the discourse around the theme Grow Digital: Leveraging digital transformation to drive sustainable food systems in Africa.

The Digitalisation of African Agriculture 2018-2019 Report by the Technical Centre for Agricultural and Rural Cooperation ACP-EU (CTA) will act as the main knowledge product guiding the development of this year’s theme.

The Report is a comprehensive analysis of digital agricultural (D4Ag) prospects in sub-Saharan Africa and defines the policy and infrastructural investments required for an unprecedented takeoff to agro-economic empowerment.

Each of the leaders will share their experiences in capturing the gains of the digital era to improve food systems, increase adaptation, and drive innovation to achieve the goals laid out in the Malabo Declaration (2014) and the Sustainable Development Goals (SDGs) set by the United Nations General Assembly in 2015 for the year 2030.

A rigorous and informative series of technical assessments, policy analyses, and political discussions will pursue a new level of consensus that could dramatically accelerate efforts to make farming in Africa more productive, profitable, sustainable and inclusive.

Subsequent talks and workshops, featuring ministers, heads of international agencies and CEOs of global, regional and national business companies within and outside Africa, will explore the bid for an agricultural revolution driven by the active involvement of the continent's farmers in implementing digital technologies in their enterprises.

Already, the unprecedented growth and adoption of digital innovations in Africa has played a major in ushering in an era of disruption and systems overhaul, knowledge economies and big agri-data.

Mobile-based technologies are an integral part of life in most parts of Africa with more than 44% of sub-Saharan Africans on mobile phone subscriptions. It is projected that there will be 634 million unique mobile subscribers across Sub-Saharan Africa by 2025, covering over 50% of the population.

In relation, mobile-based technologies are now gaining prominence across the continent, where evidence now exists of farmers embracing smart agriculture and other forms of digital technologies in their practice. The advent of even newer technologies like artificial intelligence, machine learning, remote sensing, robotics and big data makes the future much more exciting.

Dr. Agnes Kalibata, President of the Alliance for a Green Revolution in Africa, one of the AGRF's main conveners, says the full potential of digital innovations can only be derived from investment in research and development by all players in the food value chains.

"Digital technologies are now firmly with us and it is increasingly important that we keep finding use of such innovations in our farms. Going forward, digitalization will transcend every sphere of our life and it is highly likely that most of our farming investments will gain more yields as a result," Dr. Kalibata said.

"Overall, with more innovation, farmer-centric products and services can now be deployed with great success. The goal, ultimately, is to adopt digital technologies in ways that positively impact whole agricultural and food systems,

“For instance, drones are how helping farmers and governments solve problems that would have been difficult to identify in the past. Similarly, digital soil sensors, artificial intelligence and other technologies have led the price of soil testing to drop from $130 to just $3 per sample, which is within reach for the average African farmer,” she added.

Ghana's Food and Agriculture Minister Hon. Dr. Owusu Afriyie Akoto adds that the design of the policy environment will continue to determine the extent to which digitalization is implemented in African agriculture.

"We now have the tools and resources to encourage the application of digital technologies in our farms, and we expect that with proper investments in policies we will make even more gains in our productivity," Dr. Akoto said.

The incentive, for governments and others involved in policy making, is the fact that digital technologies, like big data, can help them make informed and progressive decisions for the benefit of smallholder farmers in the continent.

"The surge in data from thousands of smallholder farmers is bound to have an impact in the entire agricultural value chain, including by shaping inclusive financing programmes, encouraging the growth of markets outside traditional realms and improving access to all farming inputs," CTA's Director, Mr. Michael Hailu, said.

In the three days of AGRF19, farmers will demonstrate how digital innovations and new technologies are transforming their household businesses and communities while agri-preneurs and business leaders will showcase innovative models ready for investments and scaling.

Similarly, researchers and thought leaders will demonstrate the power of big data systems and analytics for business and evidence-based policy-making.

Additionally, public sector leaders will share their experience in delivering digitalization and agri- tech strategies, policies, and investments to stimulate the growth trajectory of their countries.

At the end of the conference, it is foreseen that all-involved make a relevant commitment to support Africa’s agriculture in a bid to Grow Digital and drive a new era of innovative policies, programs, and investments that will adapt to overcome presenting challenges while ensuring that This is Africa’s Century.

The Forum now consists of an annual event combined with thematic platforms and activities throughout the year to ensure continuous progress over time.

In its current format, the AGRF is organised by the AGRF Partners Group, a coalition of institutions that care about Africa’s agriculture transformation.

The AGRF Partners Group is made up of 21 leading actors in African agriculture all focused on putting farmers at the center of the continent’s growing economies.

Members include: the African Union Commission (AUC), the African Development Bank, the African Fertilizer and Agribusiness Partnership (AFAP), the Alliance for a Green Revolution in Africa (AGRA), the Bill & Melinda Gates Foundation, Corteva.