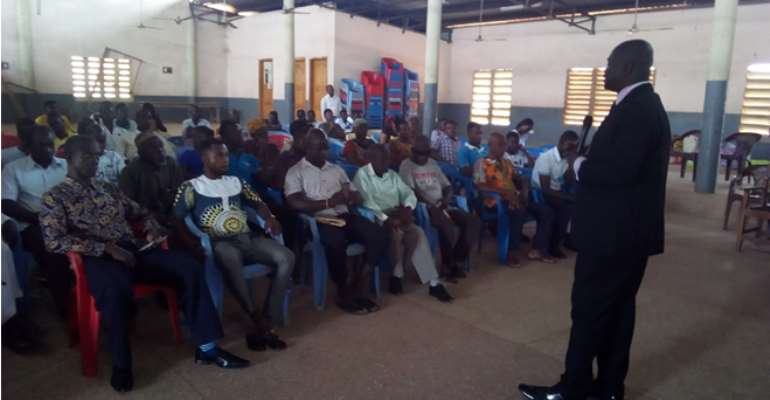 The call was made at a town hall meeting organized by Hope Alive 360 Foundation and the Dormaa East District Assembly in partnership with the Ghana Center for Democratic Development(CDD-GHANA) with support from the Open Society Initiative for West Africa (OSIWA).

In his welcome remarks at the event, the District Chief Executive for Dormaa East, Mr. Emmanuel Kofi Agyemang was grateful to the Ghana Center for Democratic Development and its partners for the work done in the District over the years which has bridged the gap between the Assembly and the citizens. He said due to the intervention of CDD-GHANA and its partner organization, Hope Alive 360 Foundation the Assembly now has functioning Public Relations and Complaints Unit and the institution of open days in the District which seek to create an avenue for interactions with the citizens. He, therefore, urged citizens to call on the Public Relations and Complaints Committee to lodge any complaint.

Touching on government policies and programs to alleviate the plight of the people, the District chief executive said government initiatives like the Planting for Food and Jobs(PFJ) has increased maize and vegetables yields while under the One District, One Factory policy, a poultry processing factory was under construction in the District. He also stated that under the government’s Planting for Export and Rural Development program, thousands of cashew seedlings have been distributed to farmers in the District.

He, therefore, appealed to citizens to take advantage of these initiatives to improve their livelihoods. The District chief executive was however not pleased with the sanitation situation in the region and called on stakeholders to ensure towards a clean environment in the various communities.

The Assembly and other government departments and agencies including the Department of Agriculture, the District Directorate of the Ghana Education Service and Environment Health Unit gave lights of their mid-year progress report and answered questions from participants.

The town hall meeting which brought together over one hundred participants from traditional authorities, religious bodies, political parties, youth groups among others was part of the Ghana Center for Democratic Development Social Accountability project implemented by Hope Alive 360 Foundation with support from the Open Society Initiative for West Africa(OSIWA) under the theme“Promoting Social Accountability Through Citizens Participation In Local Governance In Ghana : Building Transparency, Participation And Feedback Around Local Government Budgeting And Planning System”