Politics Of Convenience Or A Genuine Quest For Leadership: Krachi West Constituency In Perspective 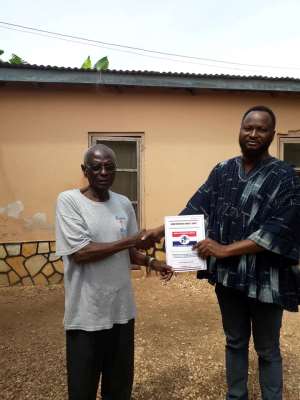 Perhaps the shortest and yet most complex definition of politics is the one given by Harold Dwight Lasswell quoted as "who gets what, when and how". Politics is thus a complex business.

The people of Ghana upon whose will the sovereignty of the country resides elected for ourselves democracy as the path through which our socioeconomic and political well-being shall be pursued since the inception of the Fourth Republic in 1992.

We summarily agreed that our collective good is achieved only in a representative democracy in which people of all manner of Ghanaians irrespective of their gender, religious or economic status, who is an adult and of sound mind can elect and be elected in democratic and competitively contested multiparty elections to serve the people.

With the advent of party politics and representation came the onerous task of potential political leaders to either amass wealth and through this influence the voting population or be a grass-roots person who is able to present he/herself as a vehicle for the attainment of the aspirations of the people.

The first member of Parliament elected after the coming into force of the 1992 Fourth Republican Constitution in the Krachi Constituency is Sampson Kwadwo Apraku on the ticket of the Nationalist Congress Party(NCP) on 26th December 1992.

By 1996 however, Sampson Kwadwo Apraku, crossed carpet to contest the parliamentary elections on the ticket of the ruling National Democratic Congress (NDC) party and was again elected to serve his second term of office as the representative of the people of Krachi.

In the year 2000, a new candidate had emerged, contested and won on the ticket of the National Democratic Congress (NDC), in the person of Francis Yaw Osei-Sarfo. He again went on to win the parliamentary elections in 2004, and 2008 respectively to represent the new Krachi West Constituency to serve three consecutive terms as Member of Parliament.

The dynamics of Krachi West Constituency politics changed when for the first time in 2012, a debutant contested known political figures and emerged victoriously. What makes this peculiar is that this debutant is a female, Hon. Helen Adjoa Ntoso who beat known political figures like Perry Ofosu in the internal primaries of the NDC party and went ahead to secure victory against notable faces like Douglas Osei Nti who had previously contested on the ticket of the New Patriotic Party (NPP) against Francis Osei Sarfo of the NDC in 2008. Again she secured another victory in 2016 amidst a threat of defecting party functionary, Immanuel Jalula Khajal, who contested as an independent candidate after failing to make it to the party's internal primaries.

While currently serving her second tenure of office, she has again been cleared by the party hierarchy to contest the party internal primaries with a debutant contestant also a female, Magdalene Nnemele known in the political circle as "Baby" of Understanding fame who is championing a campaign of youth empowerment and giving power back to the people. If given the nod and a possible win in the 2020 general elections she will serve a third term as Member of Parliament for Krachi West Constituency thereby equalling the record of her predecessor, Francis Osei Sarfo.

It is thus evident that the National Democratic Congress (NDC), has over the years created goodwill for itself in the constituency from the antecedents of presidential and parliamentary election results thereby creating a safe haven for candidates who contest on the ticket of the party.

As preparation for elections 2020 inches by, it is surprising to note that Immanuel Jalula Khajal, who previously failed to make it into the internal National Democratic Congress (NDC) primaries upon which's misgivings he defected and contested as an independent candidate in the 2016 parliamentary elections, is the frontrunner in the primaries of the ruling New Patriotic Party (NPP) and may possibly run on that ticket unopposed.

With this development, one is left wondering if this new found love between the Krachi West NPP and the former NDC defector, Immanuel Jalula Khajal is not just a desperate attempt to clinch at straws especially because Jalula was able to beat their three-time candidate Douglas Osei Nti to emerge first runner-up in the 2016 parliamentary elections as informed by the figures below.

Immanuel Jalula Khajal who contested as an Independent candidate had 5163 ballots representing 25.98%

NPP, represented by Douglas Osei Nti had 5016 ballots, representing 25.24% and CPP trailing at the bottom with 52 ballots repressing 0.26% of the total valid votes cast.

At this point, some questions that beg for answers include whether,

1. This political marriage is borne out of a genuine will to serve the people of Krachi or a marriage of convenience?

2. Jalula will continue to affiliate with the NPP in the unlucky event that he is disqualified to contest on the ticket of the NPP?

3. He, Jalula Immanuel will be able to cope with the ideological disorientation from Social Democracy to a capitalist liberal democracy?

4. He, Jalula Khajal can be trusted with sensitive party information being mindful of his penchant to defect on the least disagreement?

5. He holds the magic wand to end the continues reign of the NDC in the Krachi West Constituency.

Whatever the answers to these questions are, lies in the womb of time and the ultimate determiner is the thumb of the electorates of Krachi West Constituency.

The writer is the son of a common man with common sense.