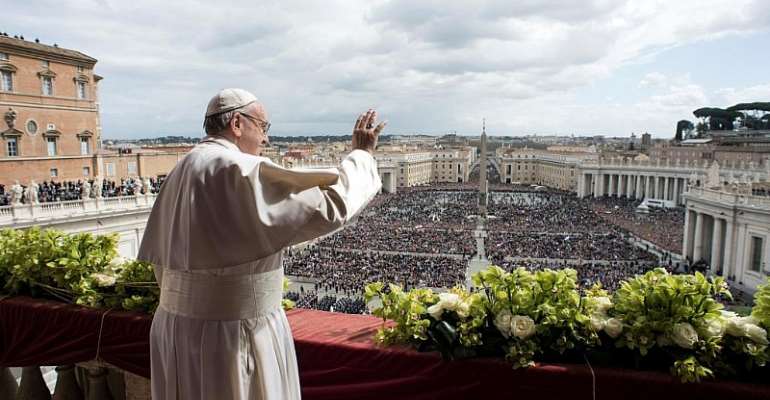 Adherence to the French Catholic church is dropping, and while it's impossible to know how many people officially renounce their faith, even the French bishops conference says de-baptism requests are going up, especially in the face of paedophilia and sex abuse scandals.

Anne-Charlotte had been thinking about apostasy, official renouncing her Catholic faith, for years before she finally wrote a letter to the parish where she was baptised in 1985.

“I announce to you, with this letter, my intention to renounce my baptism and to no longer appear in your registry,” she reads from the letter.

Today she considers herself an atheist, having abandoned her faith as a child, when she was eight or nine years old. But never sought to officially renounce the religion, until now.

What really got her thinking about it was the debate around gay marriage, which was legalised in 2013.

“To see that the Church was clearly against homosexual marriage, that was one thing,” she says, explaining her reasons.

“Then there is the anti-abortion stance. And then the stories of paedophilia coming out all over the world. That was big. I wanted to see what the Church was really doing to fight against paedophilia in France.”

The French Catholic church has been a focal point of these scandals, most recently with sex abuse accusations against priest Bernard Preynat, who was indicted in 2016 for sexually assaulting minors in the 1970s, and Bishop Philippe Barbarin who was convicted this year of covering up the abuse.

Anne-Charlotte found the Church was not doing enough: “Clearly they are closing their eyes, and they just move priests around.”

It took her a while to go through with it because she worried about her family's reaction.

“I did not want to shock my family,” she says, and even today she has not told them. “They'll take it for a global rejection of their education.”

Anne-Charlotte has spoken at length about getting de-baptised with her friend Zoe, a few years younger than she is, who has been turned off by many things in the Catholic Church over the years.

Zoe ended up involving her family in her decision, because in order to get de-baptised, you must find the date of your baptism. Zoe asked her mother, who immediately knew why she was asking.

“Because it was during the Preynat affair, she understood right away,” says Zoe. Her mother was not opposed to the move. “She said, why not? It will raise a debate in the family.”

How much apostasy?
It is difficult to know how many people in France are taking the step to formally renounce their Catholic faith. The founder of the website Apostasy for all, which proposes a form letter to send to parishes asking to be removed from the baptism registry, says there has been tenfold increase in visits to the site over the last several months.

The church itself does not provide such statistics, though Vincent Neymon, spokesperson of the French Bishops conference, confirms that more people than ever before are looking for official recognition of their renouncing their Catholic faith.

It is a decision that he says he understands, given the current scandals in the Church.

“The Pope and French Bishops have said it: There have been horrible things committed by priests. And there is also a silence that was maintained and sometimes even Bishops that covered up these mistakes,” he says.

The Church has a responsibility to the victims, he says, but also to others who have seen the silence around the crimes.

“People who are angry and scandalised by the attitude of the Church, we understand them,” he says, adding that baptism is the first step in the path of a Catholic's life. “That people chose to leave the path, because it's full of traps and obstacles and it's ugly, because the church made mistakes is understandable.”

But while people may want to leave, they cannot renounce the Church completely. The Catholic Church does not allow de-baptism. Instead, a person's name is removed from the church's baptism registry.

Baptism is “a pact between a person and god, and the only ones who can undo it are the two involved: the person and god,” says Neymon. “We cannot dissolve it. The Church is not an association or a club that you leave by giving up your card.”

Right to be forgotten
Some parishes refuse to remove a person's name, and instead they add a note next to the person's name indicating they have renounced their baptism, a move that displeases some who want to no longer be associated with the church.

In 2009 René Lebouvier took his local parish in Coutances to court for adding a note rather than removing his name from the baptism registry. He became an icon for the cause, a kind of right to be forgotten in the religious sense.

The case made its way to France's highest court, the Cour de cassation, which in 2014 ruled that the church was in its rights, and did not have to completely remove the name. It sent the case to the European court of human rights.

Lebouvier passed away in June. The website Apostasy for all writes that until the European court rules on the case “nothing prohibits [a church] from completely erasing your baptism… except for bad faith”.

Sending a message
Regardless of the method, whether a name is removed, or annotated, for Neymon, the request in itself sends a message. He says the Church should be concerned about those who are leaving the faith without going through apostasy.

“What about all those people who are not in apostasy, who, because of what is happening, are leaving, quietly, without saying anything?” he asks rhetorically. “It is to those people that we want to say that we are doing everything to make the Church a safe house once again.”

Anne-Charlotte is sceptical of what the Church is able and willing to hear.

“When I prepared my letter, I was thinking about what I would say to my diocese. And I decided it was pointless to give reasons and criticism, because they won't hear it. It will have no weight,” she says.

Zoe says her father warned her she was wasting her time going through the process.

“He told me it will do nothing to change the Church,” she says. “I think that attitude is too bad, because it is one thing we can do, even if it will not rock the Church. It's the only symbolic act we can do to show we disagree.”

A version of this story first appeared in the Spotlight on France podcast. Subscribe on iTunes or Google podcasts.

'Give peace a chance', ICoast ex-president tells police
40 minutes ago