Zabzugu MP Vows To Retain Parliamentary Seat For NDC In 2020 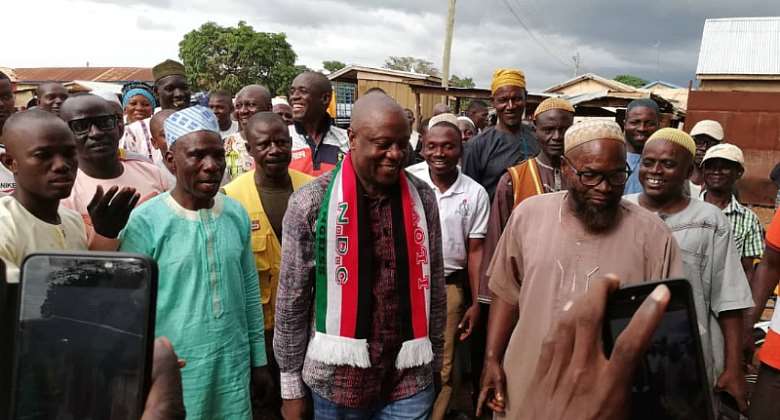 Hon Alhassan Umar with his supporters

Hon Alhassan Umar, Member of Parliament for Zabzugu in the Northern Region has vowed to retain the parliamentary seat for the opposition National Democratic Congress (NDC) come 2020.

The MP gave the assurance after he has filed his nomination forms last Thursday for the August 24, 2019 primaries, pledging to take the fight aggressively to the NDC primaries with expectations for a second victory next year general elections.

Hon Umar who is optimistic of being victorious is stemmed from the fact that he has served the people of Zabzugu diligently since he won the 2016 general elections, and therefore have the conviction that, the delegates of Zabzugu would not do a mistake at the primaries.

The incumbent MP is being contested by three other persons including a former District Chief Executive of the District.

Hon Umar won the seat after a fierce contest against then-incumbent MP of the New Patriotic Party, John Jabaa Benam.

Even though Umar has been on the seat for two and a half year now, he has within the period brought massive developmental projects to the constituency ranging from education, health, power supply, among other social intervention policies to the people of Zabzugu.

Aside deprived farming communities where power supply from the national grid has been connected, almost every community of Zabzugu township, communities that have their school buildings roofs rip off by rainstorm have been re-roofed, while several residential houses affected by rains and wind storm been re-roofed through his effort.

On the health sector, Hon Umar has dedicated colossal sum of his MPs shares of the health intervention funds and other personal resources to remodel the Zabzugu District Hospital to provide better healthcare services to his people.

Issues affecting the people greatly, according to constituents who spoke to Modernghana, is unemployment, inadequate water supply, security and roads as the main Yendi-Zabzugu trunk road remained under construction after years of complaints.

Nevertheless, the constituents believed Hon Umar deserved a return to Parliament to help lobby for more developmental projects for the constituency.

In Parliament, Umar is serving on the Select Committee of Parliament as well as the privilege committee and has been instrumental in ensuring that projects and programmes brought before the committee by the government have value for money and of interest to the people of Ghana.

Hon Umar who is seeking re-election said, he is to consolidate the gains of the NDC and make the party more attractive to the people than ever.

After filing his nomination, the Zabzugu lawmaker urged delegates to reject any form of vile propaganda, financial inducement and tribal bigotry and endorse him to return to Parliament to continue the developmental projects he started.

Latest Photo Reports
Catch up with all the political quotes from our politicians.
Advertise here
More from NDC News
ModernGhana Links
'I know it all' posture by NPP led Ghana to where we're today — NDC boy
Will free SHS, other gov't policies be canceled now that we're running to IMF? — NDC communicator
'Russia-Ukraine war, covid-19 pushed us to IMF but NDC went due to mismanagement' — Afenyo-Markin jabs Minority
TOP STORIES