The So-Called 'Exoneration' Of Charles Bissiw, Is A Nail In The Coffin Of Tiwaah Addo Dankwah, The CID Boss 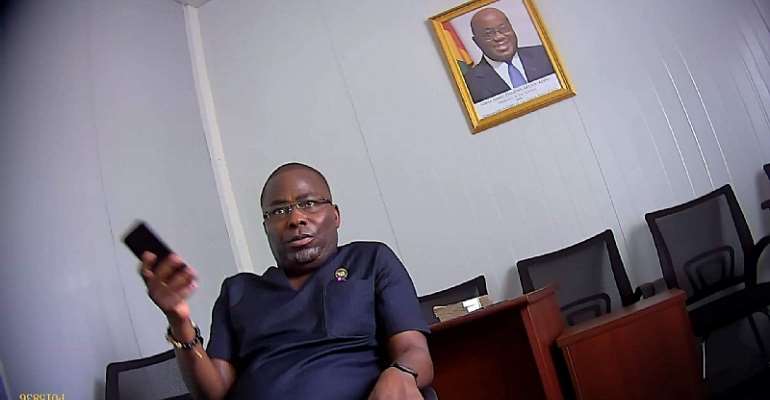 To my mind, the current CID boss, is the worst CID boss in the history of this country. I was one of the foremost people who defended her against the vitriol and lies of NDC against her when she was appointed. I took NDC propagandists to the cleaners when they tried to link her to the president because she bears a surname similar to that of the president.

When she took over, her primary concern for me, should have been how to distinguish herself. If I'm not mistaking, she is the first woman to have occupied that respectable position and that put an extra burden on her to excel. Unfortunately, that was not to be done.

Her reign as CID boss has been so tumultuous even before she could be confirmed as the substantive boss. Beginning with the infamous A Plus scandal - I knew A Plus was only making empty allegations against the two dep chiefs of staff but his allegations gained gravitas as soon the CID boss was caught on tape seemingly trying to romance A Plus to stand down on his allegations. But for her unprofessional romance of A Plus, those allegations he trumpeted against Asenso Boakye and Abu Jinapor, would have remained baseless.

When caught, she denied and claimed A Plus had doctored the tape. Incredible! Doctoring a tape to blackmail someone if not a crime, should at least pass for civil suit. She never explored any of the options - neither criminal nor civil against A Plus after the latter publicly challenged her to prove her case of doctoring. Her conduct brought an embarrassment to the government as though it was the government that sent her on that purposeless mission to romance loudmouth A Plus. That case will drown naturally as usual in Ghana.

Tiwaah didn't learn any lesson from the A Plus scandal that brought her entire integrity and credibility prowling. When the loudmouth and noisy MP started his crusade to harm Anas and Tiger eye, she sat unconcerned. A true professional would be proactive and not reactive after the horses have bolted. What is jawdropping in the Hussein Suale's murder case is that - the young dedicated journalist, reported death threats on his life following the call for retribution against him by the noisy MP, to the police. Even after his murder, tape recordings of people who called to threaten him, have been handed over to the Tiwaah-led CID but not a fly has been arrested.

In between, a lot of issues have happened including her inability to contain the rampaging vigilantes but what courted a thunderous reaction from Ghanaians, is how she has handled the missing T'rdi girls' case so far. Tiwaah had the effrontery to warn grieving parents not mount pressure on her. As if she is working for her private firm where she can decide what to do and what not to do. Clothed, booted, sheltered, paid by us and she must work for us. Our pressure will be on her in the face of her crass incompetence to deliver on the job.

Here is what summed up Tiwaah's incompetence - as if a kumawood drama - Tiwaah courageously mounted a national platform and told the whole world that the T'rdi girls have been found. It turned out that she was engaging in blatant lies. Unabashed by her conduct, she still continued to stay in office in spite of the many voices of conscience that called on her to resign. Who was Tiwaah deceiving? Whose emotions was she playing with? What did she intend to achieve by that? As usual this is Ghana, the one-week republic and so it passed after one week.

In recent times, Anas Aremeyaw Anas, conducted a sting operation which exposed high-profiled persons dabbling in the sin of galamsey. Charles Bissiw, the man in charge of executing the president's vision of stemming this canker once and for all, was caught bending rules to favour a fictitious company that had sought to circumvent the processes for securing valid license for mining.

As a defacto practice, vintage Tiger eye petitioned the OSP to investigate allegations of corruption against Mr Bissiw on the basis of their own investigations. In a intrusive manner, we started seeing CID intermeddling in the matter and purporting to have also commenced parallel investigations into the matter properly brought before the OSP who had publicly stated his office's preparedness to deal with the matter. Many onlookers surmised that, Tiwaah's intermeddling, was a whitewashing attempt. The confidence with which Mr Bissiw stated his preparedness to cooperate with the CID while same could not be said about the OSP even though the latter was the first to commence investigations, left a bafflingly puzzling impression in the minds of many.

In the words of the indomitable Amidu, he wrote to the CID to stop the unwarranted intermeddling in the case but Tiwaah responded by saying she has been instructed by political heads to continue the investigations regardless. The president was very clear about why he appointed Amidu - he believed Amidu was politically unbendable and that he could deal with persons of all shades. Tiwaah's response to Amidu clearly stamps the president's position and also brings to the fore how malleable Tiwaah is.

Fast forward, we woke up today to hear Tiwaah has cleared Bissiw bizarrely. This Tiwaah attitude would definitely create communication problems for the government. The trust in Tiwaah's office has completely waned and her intermeddling in the galamsey fraud investigations, was seen by many as an attempt to cover up. The doubts in the minds of many have been confirmed by Tiwaah. It is important for us to note that, Tiger eye never collaborated with Tiwaah. Tiwaah in her own report stated that her decision to clear Bissiw is based on inconclusive evidence since Tiger eye wasn't willing to cooperate with her. Is it professionally sensible to clear a person based on half-baked investigations? Why didn't Tiwaah say that the CID can no longer continue with the investigations since there's no complainant, nor evidence to premise the investigations on instead of purporting to have cleared Bissiw?

Ever since I was born, I have never seen the CID come under such a tirade of attacks like we are witnessing under the reigns of Tiwaah. Her incompetence and unprofessional conduct, emit stench to the high heavens. She has brought the CID to its all-time low. I wonder if she can continue to enjoy the support of Ghanaians and whether Ghanaians will accept her findings in other investigations be them well conducted. She has really nailed her own coffin with her latest and she must humbly bow out.