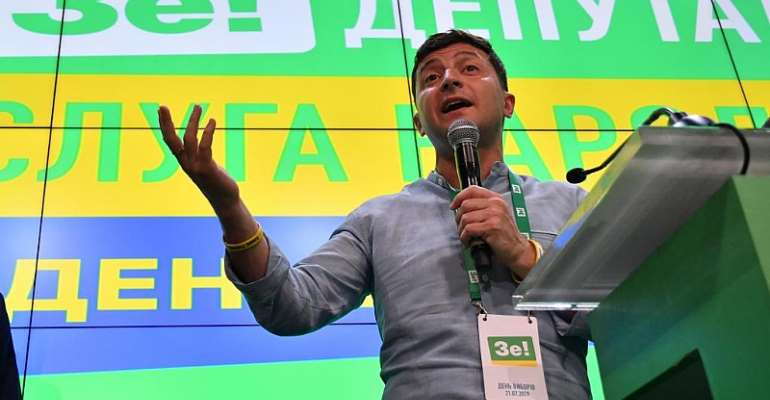 Ukraine President Volodymyr Zelensky's party has won snap parliamentary elections with a record share of the vote, according to partial results and predictions. The Servant of the People party was ahead in more than half of the country's 199 constituencies.

The comedian-turned-president's party had around 42 percent of the vote early Monday, well ahead of its nearest rival on just over 12 percent, with 44 percent of votes counted, according to partial results.

Local media projections showed the party on track to pick up more than half the parliament's 450 seats.

"We will not let Ukrainians down," President Zelensky said at his election headquarters after the exit poll results were released. "You know our main priorities. They are the same as those of every Ukrainian, I'm sure to end the war, secure the return of our prisoners and victory over the corruption that still remains in Ukraine."

Monday's exit polls shows Zelensky's new Servant of the People party with by far the most votes. The Russian-friendly Opposition Platform is in second place with nearly 13 percent, followed by former President Petro Poroshenko's party with around 9 percent.

With over 40 percent, the Servant of the People strikes the highest score in a parliamentary election for any party since Ukraine gained its independence with the 1991 collapse of the Soviet Union.

Ukraine has a mixed election system, where half the parliamentary seats are determined by votes on party lists and the rest are first-past-the-post constituency races. The Ukrainian leader shares power with parliament, which will nominate a prime minister and form a government.

Zelensky, a sitcom star, offered a coalition with a pro-Western party, Holos (The Voice), headed by 44-year-old rock star Sviatoslav Vakarchuk. Holos has so far secured around 6 percent of the votes.

President Zelensky said he ready for talks with other political forces that share his principles..

Both Zelensky and Vakarchuk chose to work with young people new to politics and banned candidates who had previously served as legislators.

Zelensky's victory in April has been viewed as a rejection of Ukraine's political elite for their failure to improve living standards, root out corruption and end the conflict with Russian-backed separatists that began in 2014 after a popular uprising ousted a pro-Moscow president.