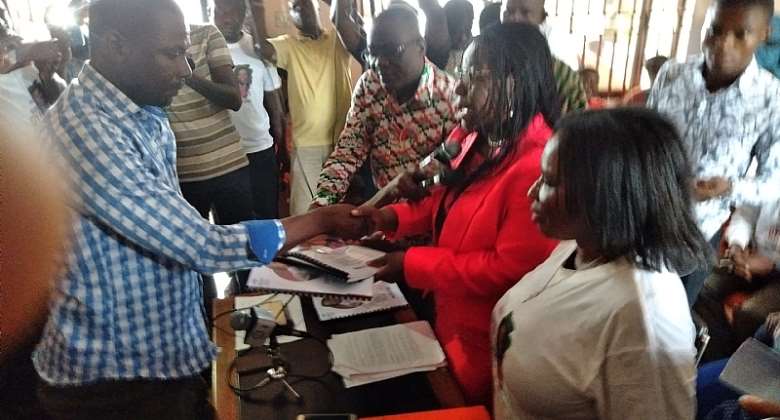 According to her, the grassroots of the party including the branches and the wards need to be resourced to help obtain a resounding victory in the 2020 general elections.

Nana Oye, made these comments after she had filed her nomination forms on Friday, July 19, to contest the NDC primaries scheduled for August 24, 2019.

Nana Oye is in the race with Mohammed Adamu Ramadan, who contested but lost to Buabeng Asamoah of the NPP in the 2016 general elections.

She told teeming party supporters and delegates at the party office in Adenta that she entered the race after wide consultation with party leaders, elders, current and past executives and former MPs, among others before taking the decision to contest.

The former Gender Minister said, NDC needs to reclaim the Adenta seat but that can only be possible if the grassroots are armed with resources needed to embark on a clean campaign to victory.

She promised to resource all the branches and wards towards victory in 2020 general elections.

Adenta constituency, she said deserved a good leader who would lobby for developmental needs, stressing that, when elected as a parliamentary candidate and subsequently win the national election as MP, she would not neglect the people as they are been neglected by the NPP.

She cited some national policies she implemented as Minister, coupled with her experience as a lawyer and human rights activist as some of her track records.

The NDC parliamentary aspirant added that as a woman and a mother she does appreciate the difficulties and would never turn her back to the constituents given the knot.

While promising a campaign devoid of insults, name-calling and character assassination, the former Gender Minister urges supporters to be decorous in their pronouncements as insults and personal attacks don't translate into votes.

Nana Oye also paid glowing tribute to the former MPs of the party in Adenta including Kojo Adu Asare, Emmanuel Nii Ashie-Moore, the former Municipal Chief Executives Kakra Vanlar and Benjamin Angenu as well as party past and present executives for holding the party ideals in Adenta till date.

Nana Oye Lithur reiterated her zeal to deliver a strong united party in the Adenta Constituency.

Another area of concern to her is to deliver a well-resourced coordinated strategic campaign for the NDC that would win back Adenta Parliamentary seat and win more votes for John Mahama.

She assured NDC delegates of a well-functioning administrative staff, restructuring and expansion to include IT, monitoring, assessment and research desks at the Constituency as well as creating offices for some strategic wards and branches.

Patrick Suantah assured her of a fair playing ground from the leadership of the party and wished in her the best to lead the party to victory come 2020 general elections.

Alhaji Zakaria urged the supporters to desist from politics of insults that may undermine the democratic credentials of the NDC.