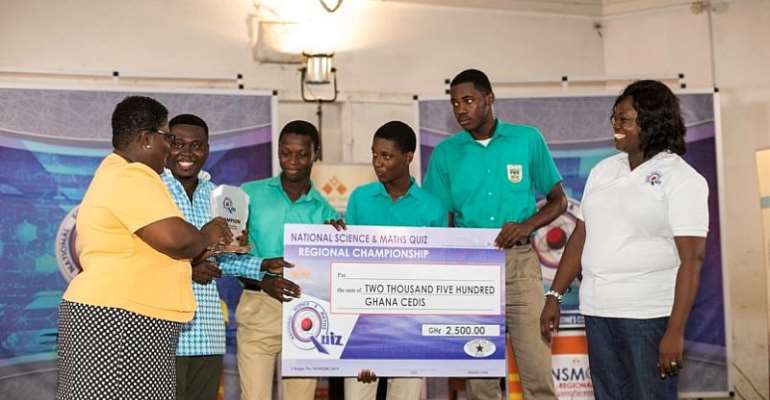 The National Science and Maths Quiz (NMSQ) has over the years presented to the country green talents of great scientists. This year was no exception. We were thrilled with fascinating brilliance from young scientists from various senior high schools.

I remember how boring NMSQ used to be in the past, say the 90s. Now it has become a great forum for senior high schools to showcase their academic prowess and superiority over rivaling schools.

The support NMSQ has galvanized over the last 5 or so years, is really refreshing. Almost all alumni of competing schools have become so keen about the performance of their respective schools. We make fun of each other in respect of how well our schools performed.

This enchanting euphoria around NMSQ is an indication that we have made some progress in respect of our interest as a people, in science and maths education. How do we turn this euphoria into actionable deeds?

Of what use is your gold if due to lack of technology, others mine it and give you a paltry share? Of what use is your cocoa when you can't add value and so those who add value make much more in terms of revenue than you? What is the use of your bauxite, oil, etc. when they'll be mined by those with technology and remit contemptibly meagre part to you as your share and destroy your lands in addition?

The paradox of the blind man who invited guests to his house for dinner but due to his blindness, all the better part of the food on the table was eaten by the guests, explains the situation of counties like ours. How can the best chocolate come from Switzerland when not a single tree of cocoa can be found there?

Anyway, the focus of this article is to ignite our thinking and to draw our attention to a very good opportunity that can assist us to turn things around. For me, NMSQ is a very good opportunity for us as a country, to take a look at science and maths education. Can we develop a national strategy for science and maths education - which strategy - will detail how we can tap into young scientists and nurture them into great scientists for the future?

It is good for us to have fun about NMSQ. It's good for the winners to be hosted by the president. It's good for big men to showcase their schools in light of the competition. It's all good. These side 'rumpuses' make the game lively. However, we should be ashamed if all we do is to limit the NMSQ to rivalry, presidential treats, etc all for the optics and go to sleep afterward.

Where do these young scientists go after here? Can we trace back into the 90s to see who and what those who participated have become? My suggestion is that the government should set up a fund purposely for young scientists. The fund should be used to sponsor these scientists to attend the best science universities in the world. In fact, the GETFUND scholarship which is used to sponsor political apparatchiks should be scrapped or redirected to take care of what I am proposing.

As a strategy, the youngsters under the fund should be monitored and mentored until they become accomplished scientists. We want inventors and not just medical doctors. Mostly in Ghana, all the potentialities at best, end up in the hospitals. I'm not in any way undermining the important role of doctors, however, it's not innovative on our part as a country, to allow all our potential inventors to end up in the hospitals as doctors due to lack of opportunities and mentorship for the young scientists.

I am of the firm faith that we can get the Einsteins, the Newtons, the Eddisons, etc from NMSQ if only we will be smart and farsighted. Ghana cannot be beyond aid without science and technology. For us to be beyond aid, we need to take science and maths education seriously and groom our young scientists then and only then, can we compete with the rest of the world.

Having said this, I congratulate St Augustine and I wish Ti AMASS, my alma mater better luck next time.