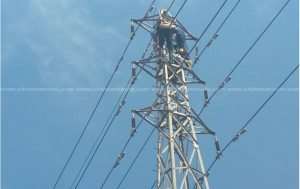 The Ministry of Energy has been caught in a double promises after 16 months of assuring to provide electricity to five communities in the Zabzugu Constituency of the Northern Region.

In 2017, precisely 24th October, the Energy Ministry through a Deputy Minister, William Owuraku Aidoo assured the people of Zabzugu that, by end of the first quarter of 2018, power connection project works in five communities under the Self Help Electrification Programme would have been completed.

The assurance was given when the Member of Parliament (MP) for the Zabzugu constituency, Hon. Alhassan Umar filed a question wanting to know when the Project to connect the communities onto the national grid would be completed.

But 16 months after the Ministry assurance, when same question was resurfaced in parliament by the MP, the Ministry simply lifted same answers of 2017 to response to the question of 2019.

For avoidance of doubts, THE REPUBLIC produce and reproduce both question and answers for the 2017 and 2019 by the MP and the Ministry respectively.

The question has been repeated in this form, "Mr Speaker, I rise to ask the Minister for Energy when will the contractor return to site and complete the connection of the following communities to the national grid: (i) Korikurugu (ii) Nyankpala (iii) Mongoase (iv) Jagrido. (v) Kupariga."

"High Voltage (HV) and Low Voltage (LV) poles have been delivered and planted at the various sites. Some materials for installation works have also been sent to these sites. The Ministry is in the process of procuring the outstanding materials to allow for the completion of works by the end of first quarter, 2018," Mr Aidoo told parliament.

However, in a supplementary question, Mr Alhassan Umar asked, "Mr Speaker, can the Hon Deputy Minister give us the time lines for the procurement of those materials?"

Mr Aidoo answered, "Mr Speaker, as I stated earlier, the materials have actually been ordered and we hope to take delivery of them before the end of the year(2017). As I said earlier, as soon as the materials arrive, they would be transported to the site in question."

Unsatisfied with the additional answers, Mr Umar asked a second supplementary question, " Mr Speaker, I would like to know when the procurement of the materials were ordered.?"

Again, Mr Aidoo said, "Mr Speaker, as it may be well known by students of history in ministerial affairs, when there is a transition, there is always a time lag between ordering and procuring materials. So, we have suffered that time lag.We have procured some materials. Others were already on order by the previous regime."

"As I said, we hope to take delivery of them by end of the year, and we would send them to the sites for the work to be completed," the Deputy Minister told parliament in 2017.

Fast forward, when the same question was asked on July 3, 2019, this is what the Deputy Minister, Mr Aidoo told parliament, " Mr Speaker, . Korikumgu, Nyankpala, Mongoase and Jagrigo communities form part of the on-going Self-Help Electrification Programme (SHEP-5) currently being implemented by the Ministry of Energy."

"Apart from Jagrido community, the remaining communities are under existing High Tension (HT) network and hence will require no HT network construction. Jagrido community has been supplied with 11 no. out of 26 no. HT poles."

" The 11 no. poles have all been erected but are yet to be dressed.All the Low Tension (LT) poles required for each of the communities have been supplied and erected at site."

"The supply of pole top accessories to site, which initially delayed, has since been completed. The project contractor is expected to remobilise to site to resume installation works before the middle of this month.The project is expected to be completed by the end of December, 2019," he stated.

The appetite of promising and unfulfilling same on any demand by citizens of their fair share of the national cake appeared unabated.

Many MPs have had cause to complain of Ministers and their ministries have the penchant of given timelines of questions on demands but never fulfill same.