Parliament Approved €31.5m For Water For All Project 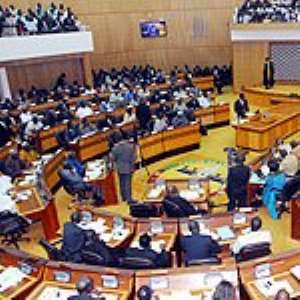 Parliament on Friday June 28, approved a €31.5 million United Kingdom Export Finance (UKEF) facility for water for all project in some communities in the country.

Parliament also approved another loan facility agreement between the government of Ghana represented by the Ministry of Finance and HSBC for €4.5 million.

The two loans are to finance the implementation of the rural communities and small towns water supply project under the following terms and conditions.

On the repayment period for for the two loans, UKEF facility is given at 15 years and HSBC repayment is for 4 years.

Per the interest rate, the UKEF facility purged it's interest at 1.74% per annum of current pricing, whiles interest of the HSBC tied facility is 4.8% per annum .

The HSBC Bank plc, he said is under an export credit financing structure with the UK export finance providing direct lending to the Government of Ghana to finance up to 85% of the contract value and the entire guarantee premium, stressing that, "HSBC is lending to the government up to 15% of the contract value to finance the government’s contribution towards the project."

The Finance Committee Chairman explained that the project is to support the Ministry of Sanitation and Water Resources and Community Water & Sanitation Agency (CWSA) to install and maintain point and piped water systems in rural communities and small towns in Ghana.

According to him, the project has four main components including, the Point Source Nano-Filtration System (€3 million) 10% of project value, which would provide treated water to 150 communities in areas where water sources are contaminated.

The second component would be Piped Water to Households & Public Standpipes at a of €21 million representing 70% of the project value of which both piped water to household and public standpipes would be provided in 12 small towns.

In addition, there is also an Environment, Social Safeguards & Community Engagement component which will cost €1.3m (4.33% of project value). This component will cover environmental and social safeguards interventions, selected communities, community engagement and sensitisation and training of water system management staff.

Dr Assibey -Yeboah noted that the facility would take care of Project Management which will cost €4.5 million, making up 15% of the project value.

This component, also takes care of fees for the overall planning, management and oversight of the project design development, data research review, logistics, distribution, implementation and maintenance on behalf of the government of Ghana by CWSA’s internal project and Aqua Africa (the UK private company that is working on the project)’s external team.

Latest Photo Reports
Catch up with all the political quotes from our politicians.
Advertise here
More from Parliament
ModernGhana Links
AMERI Power Plant relocation contract to be brought to Parliament — Energy Minister
This nicodemous attempt will not be countenanced, present contract on Ameri Plant relocation to Parliament for approval – Minority
Minority raise concerns over govt's alleged transfer of Ameri Power plant to Kumasi
TOP STORIES