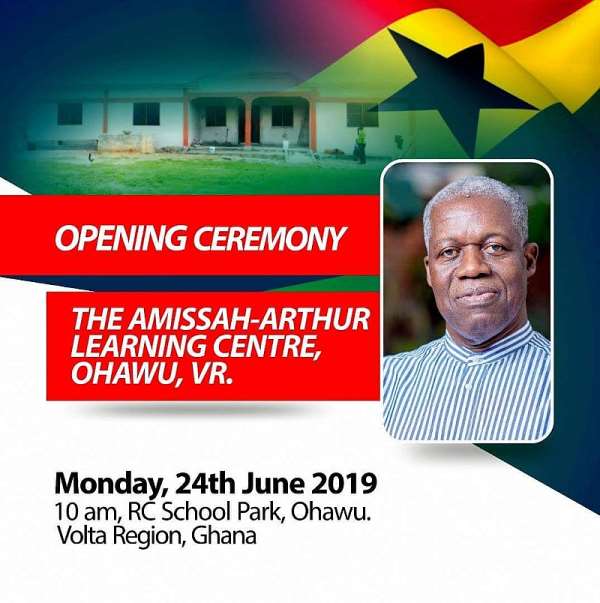 Former Communications Advisor to the Ex-President John Mahama, Ben Dotse Malor says in honour of appreciation to the Late Vice-President of Ghana, Kwesi Bekoe Amissah-Arthur, an ultra-modern library and computer complex built in Ohawu, Volta Region has been dedicated to him.

According to Ben Dotse Malor, the Chiefs and people of Ohawu believe it is befitting to honour the late Vice President by dedicating the learning Centre to his name.

They said the faculty will help school pupil boost their ability to read, learn and write in school.

In a Facebook post, the Former Communications Advisor to the Ex-President Mahma said “On the first anniversary of the Former Veep's demise, and with the dedication, support, and commitment of Mrs Matilda Amissah-Arthur, we - the Chiefs and people of Ohawu - feel, think, and believe it's fitting to honour Mr. Amissah-Arthur's memory by dedicating this Learning Centre in Ohawu to his name. We pray, hope, and expect this Centre to promote these qualities in the young ones from Ohawu and neighbouring communities to become great citizens, not only of Ghana, but the world.”

He revealed that the new library and computer complex has been furnished by the former Second Lady, Mrs Amissah-Arthur and her "Break The Myth" NGO, stocking it with huge collection of books and other learning materials.

“As we discussed my deep desire to see the younger ones in Ohawu have opportunities and facilities for advancement that I didn't experience growing up there, Mrs Matilda Amissah-Arthur generously mentioned that she could help set up a library, IF I and the people could provide an appropriate building. She has indeed renewed the commitment that she and her husband had made for a library in Ohawu. By God’s grace and orchestrations, a friend of the Amissah-Arthur family also heard about the project and generously offered to help attach a Computer (or IT) Centre to the Library.” he revealed.

Ben Dotse Malor added that a local management committee will be trained by the former Second Lady to run the new facility.

He described the former Veep as a champion and example of education, public service, and accountable, decent, dignifying son of Ghana.

The commission of the new Library and Computer complex will be officially commissioned on Monday 24th June 2019 at Ohawu in the Volta Region.