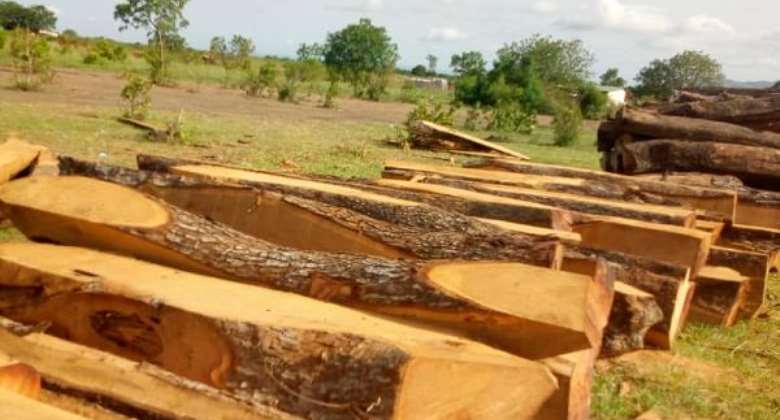 African rosewood (Pterocarpus erinaceus) continues to be over-exploited in Ghana in spite of several government bans and the listing of the tree species in CITES Appendix III and then II.

In 2014, Ghana was ranked second to Nigeria in Africa and fourth in the world among top suppliers of rosewood logs to China by volume (Treanor, 2015). Concerns about sustainability of the species has led to the imposition of five (5) bans on felling and export of rosewood since 2012, with latest in March 2019. Of all the bans, the most significant one was the July 2014 ban. It was the longest (at least covering a period of one year). Seeking more regulatory control against the overwhelming tide of exploitation in addition to the felling and export bans, the species was listed on CITES Appendix III and later up-listed to Appendix II.

It was expected that, the imposition of the bans and listing of rosewood on CITES Appendices will lead to sustainable management of the species by ensuring that, all exports are sourced legally in a manner non-detrimental to the species’ survival. The bans were also expected to control harvesting and international trade of Rosewood leading to elimination or considerable reduction of illegal logging.

Why bans failed
William attributes the failure (limited impact) of the ban and CITES to ensuring sustainability of rosewood to abuse and misapplication of salvage permit, lack of monitoring and transparency, corruption, ‘lawful but awful’ trade, and non-compliance with key requirements of CITES Appendix II listing such as non-detriment findings (NDF).

Implications of findings
The finding of his study has major implications for Ghana, CITES, and the survival of the highly-prized and sought-after tree species. First of all, considering the current rate of exploitation, continuous logging of rosewood will drive it to commercial extinction with consequences for socio-economic benefits derived from it. It may also lead to trade suspension by CITES as Nigeria and other countries are currently experiencing. And this has revenue and reputational implications.

Suggestions
Consequently, he stressed that, Ghana should immediately suspend trade in the species and intensify monitoring of the species against exploitation. Local communities in collaboration with the Forestry Commission, DISEC in rosewood endemic areas and the media should be at the center of the monitoring and reporting of incidences of illegal logging activities. In addition, he stated that, the suspicion of cross-border transiting of illegally exploited rosewood should prompt the establishing of a regional (ECOWAS) forum for fostering closer cooperation for law enforcement on rosewood exploitation and trade. For CITES, he called for the Convention’s push for more credible legal acquisition findings that are capable of determining whether timber and wood products from CITES-listed species including rosewood has been harvested in accordance with all relevant applicable provisions of the exporting country’s legislation. It should also consider the use of third-party independent auditing or monitoring of the process. Lastly, he was of the opinion that, since rosewood has been heavily logged in Ghana, ex-situ conservation measures such as seed banking, field gene banking, tissue culture and plantation development should be undertaken to conserve the endangered plant species.