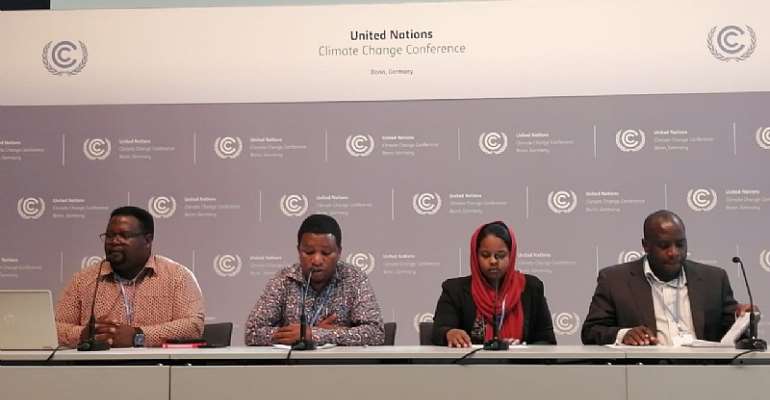 African governments and civil society are joining the UN Climate Change Conference (SB50) in Bonn, Germany, amidst very disturbing memories of recent impacts of extreme weather events on the continent, especially in Mozambique, Malawi and Zimbabwe.

The African continent is under extreme pressure more than ever due to these extreme events.

Africa Civil Society, under the umbrella of the Pan African Climate Justice Alliance (PACJA), has called for urgent climate action and support to addressing such extreme events.

In Katowice last year, there was a call for a comprehensive and balanced Paris Agreement Work Programme to be delivered that upholds equity, justice and act as an anchor in the Paris Agreement’s implementation.

But this ambition is yet to be realized.
In a press statement signed by Mithika Mwenda, the Executive Director of PACJA, African CSOs have outline expectations from the Bonn climate talks:

Loss and Damage
We call for the commitment in the implementation of the Warsaw International Mechanism on Loss and Damage and need a predictable a financing approach for Loss and Damage in Africa. Africa continues to suffer enormous economic losses in billions of dollars as a result of climate change impacts, coupled with un-costed social losses, due to climate induced displacement of persons thus triggering conflicts. In Mozambique, 3 million people are affected, with estimated USD 1.4 billion in total damage, and USD 1.4 billion in losses. The recovery and reconstruction is estimated to be 2.9 billion USD. In Malawi, the president has declared a state of national disaster due to devastating floods, where more than the lives of 870,000 people are affected. A post-disaster assessment done by World Bank and UNDP indicate around USD 222 million is needed for the recovery. In addition, in Zimbabwe El Nino induced drought has affected 5.3 million and 234 million is required to avert hunger. It is worrying to keep hearing the answer for loss and damage as insurance, this might be possible in developed countries but NOT in developing countries especially in Africa, this is a far-fetched dream.

Climate Finance
We expect climate finance to continue to be a critical issue of negotiations. We expect a clear roadmap for fulfilment of climate finance commitment of USD 100 billion per year by 2020 should be agreed, the commitment should include towards an ambitious Green Climate Fund (GCF) replenishment. Parties should also agree to discuss a new post-2025 quantified climate finance goal from the floor of USD 100 billion. Unless there is a direct and explicit linkage between Article 9.5 and 9.7 and Article 13, much of this exercise will be a cosmetic display without any meaningful assessment of support provided. As the African Civil Society, we believe that the accounting modalities to be used by developed country Parties on financial resources provided and mobilized through public interventions via the transparency framework must reflect the information provided in the biennial indicative communication of support.

Adaptation
Adaptation is a core element of the Paris Agreement, there is a need to have clear outcome that allows for operationalization of Adaptation component of the agreement, that allows for enhancing flows of support to adaptation actions of developing countries. There is a need for a clear outcome that will enable the operationalization of the adaptation communication with clear and consistent information that will enable assessment of overall progress towards the achievement of the global goal for adaptation.

Mitigation
We should reach clear options on issues pertaining scope of NDC’s mitigation, further action on information on clarity and understanding without leading to diluting the clear flexibility and differentiation in the NDCs between developed and developing countries as per article 4.3 with clear outcomes with developed countries to take the lead on mitigation actions, and developing countries using the enhanced means of implementation to raise their ambition.

Agriculture
Agriculture is a key economic driver in Africa. We welcome the progress achieved to date by adoption of decision 4/CP.23 on the Konrovia Joint Work Programme (KJWA) representing a major step forward in the negotiations on agriculture under the UNFCCC. Its implementation will require joint efforts from both subsidiary bodies, as well as from constituted bodies under the Convention and other relevant stakeholders. We recognise the importance of the Koronivia joint work on agriculture to provide recommendations on building the resilience of agricultural and food production systems, and sustainable and predictable access to adequate means of implementation, in particular technology transfer and financing that is predictable and adequate.

Capacity Building
We emphasise that there is need to build long-term capacity among developing countries which includes strengthening capacity of climate change institutions; capacity building should at all times be focused on the needs of countries and driven by countries. Further, capacity building should adopt a multi-stakeholder approach, including all stakeholders and supportive legislation to facilitate this. We call for provision of support to the Capacity Building Initiative for Transparency (CBIT), setting aside of additional resources and meeting of existing voluntary contributions pledges. We further call for provision of financial resources to support country driven capacity building initiatives.

Gender
We note the importance of gender considerations in policies that supports activities on adaptation, mitigation, finance, technology development and transfer, including capacity building, and we acknowledge the progress made in implementing decisions on gender under the Convention. We call for Parties to increase their efforts in ensuring that women are represented in all aspects of the Convention process, and gender mainstreaming is achieved in all processes, and activities of the Convention.

Fresh Energy to push Negotiations
We are calling on parties here in Bonn, Germany to fresh energy and push the negotiations towards concrete outcomes that will address this grave concern to Africa. The world is watching our ambition in implementation of the Paris Agreement as it will determine whether we are serious in addressing the climate change problem or it’s a mere rhetoric.

Doctors threaten strike from October 1 over arrears
38 minutes ago