Psychology Of Police Uniform - How Many More Colours And Designs Of Uniform Does Ghana Police Service Need? 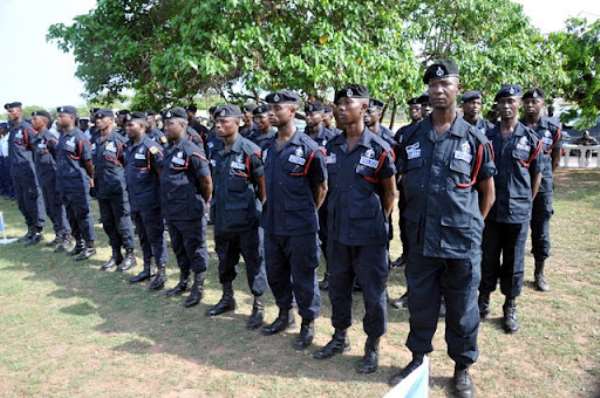 I am doing my little best as I did during my days as an accident investigator at Peki to put victims of domestic violence into stable condition and make their homes a place to live where no violence abounds. At my new unit, one ought to be very discretional and considerate in enforcing laws not to break homes but rather foster family unity and communal living.

Last night a woman came to the unit deep in the night and reported that the husband had threatened to kill her by Saturday and so the police should save her. I calmed her down and spoke to her a lot. I then gave police emergency numbers to her to call if she should sense least danger.

Yesterday evening at about 9pm, one uninformed colleague and I followed up to the resident of the the husband whom the woman alleged had threatened to kill her. It's a gated community or estate at somewhere Oyarifa below the Akuapem-Togo range. On reaching there, the private security guards at the gate said they would not allow us to enter the estate despite identifying ourselves as police officers. These security guards wouldn't listen to us no matter how we proved our identities as police officers even though one of us wearing a police uniform.

Finally I told them the consequences of obstructing the police from executing their lawful duties and so they should prepare to face the consequences if something should happen to the woman. Then they realized we were serious so they called their supervisor to come and when he came, he was a bit reasonable. He first of all asked who we were and even when I had pointed the police uniform to him, he said that is not enough to prove that we are police officers. Besides there are lot of police uniforms these days which make it very difficult for them to differentiate who real police officer or an imposter is, he said. He cited several instances where people wearing police uniforms came there under the guise that they were police officers only for further checks to prove that they weren't police officers.

At this stage I realized that I can't blame or fault these poor security guards who are doing everything possible to protect their jobs even if they will have to prevent us from entering the estate to save their jobs. Can these private security guards be blamed for preventing us to enter the estate? I think they can't blame because these days it is increasingly becoming difficult to identify a real police officer and an imposter so one ought to be very careful especially when Ghana Police Service itself doesn't have one colour and design of police uniforms but different colours and designs of police uniforms thereby creating confusion in the minds of the general public thus making it difficult to identify who a real police officer is.

What should civilians do if they cannot differentiate different police uniforms in wakes of imposters who are using police uniforms to commit crimes? On the psychology of police uniform, Johnson (2001) state that police officers uniform has a profound psychological impact on others, and with the slightest alteration to the style of the uniform may change how citizens perceive them and Stank etal (2012) strongly argues that the colour of police officers uniform forms impression and I honestly agree with those security guards who tried to prevent us from entering the estate to perform our lawful and statutory duties.

It has lately become a problem and embarrassment considering how members of the general public rather question police officers about their identity due to mistrust. Many of them are not conversant with different colours and designs of police uniforms due to constant changing and alterations of the police uniform by the police administration.

In very recent years, it has become a ritual for every IGP to introduce his own colours and designs of police uniforms and this is actually leading to multi-colourization of the police service service as far as uniformity is concerned.

When Mr. Patrick Kwarteng Acheampong took over as the IGP, he brought his own colours and designs of police uniforms and soon after he left, Mr. Paul Tawiah Quaye brought his own type of uniform and the same applies to Mr. Mohammed Alhaassan. Mr. John Kudalor was in office as the IGP for a little over one year and he also introduced his own uniforms before he he left office. This makes some of us wonder the motivation behind changing and introduction of new police uniforms coupled with camouflages.

Still on the psychology of police uniform, Johnson (2001) further posits that most people can identify law enforcement officers by their official police uniform. When citizens on a busy street need help, they scan through the crowd looking for a distinctive uniform of a police officer. When drivers arrive at intersections and find a person in a police uniform directing traffic, they willingly submit to the hand directions of the police officer. Criminals usually curb their unlawful behaviour when they spot a uniformed police officer.

The police uniform is not ordinary and represents state power and authority as far as law enforcements are concerned and I think it is time for some intervention to be done by parliament to halt introduction and re-introduction of police uniforms by every IGP who get the opportunity to head the police service. Despite different colours and designs of police uniforms, uniform supply to police personnel is still on shortage as police officers will have to look for their own materials and sew their uniforms.

The question remains how many more colours and designs of police uniform does Ghana Police Service need to create more confusion in the minds of the general public?

This is terminal and chronic. Let's collectively heal it.