Understanding The Work Of God 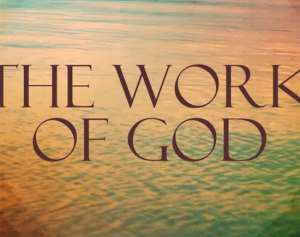 Man was made and placed in the earth to work. The Bible says, “The LORD God took the man and put him in the garden to work it and keep it. And the LORD God commanded the man saying, “You may surely eat of every tree of the garden, but of the tree of the knowledge of good and evil you shall not eat…” (Genesis 2:15-16).

But apart from men and women working for themselves and fellow humans, virtually all men and women also work either for God or for the devil. To work for the devil is to be captured by him to engage in his destructive activities and promote his desires. Yes, there are works of the devil in the world. And he captures people to work for him. The Lord Jesus Christ revealed this in His words to the Jews who refused to believe in Him:

“You are doing the works your father did…You are of your father the devil, and your will is to do your father's desires. He was a murderer from the beginning, and does not stand in the truth, because there is no truth in him. And the Apostle John also says that “…the reason the Son of God appeared was to destroy the works of the devil” (1 John 3:8).

There is no doubt that the devil has works in the world which are being done by himself, his fallen angels (demons, wicked spirits) and people he has captured to advance his works. The works of the devil are the evil deeds, acts of lawlessness and all sins including unbelief, curses, bestiality, homosexuality, corruption, oppression, exploitation and murders which have bedevilled the nations of the world.

Then also, there is the work of God in the world which was revealed by the Lord Jesus Christ. And there are many men and women who have also been called to do the work of God. One day, while teaching the Jews, Jesus disclosed what God's work actually is. That was when the Jews had asked Him about what God's work is all about.

“Then they said to him, “What must we do to be doing the works of God? Jesus answered them, “This is the work of God, that you believe in him whom he has sent” (John 6:28-29). Notice that Jesus stressed “the work of God” and not “the works of God” as the Jews put it. We can now see that God's greatest work on earth is to get sinners to believe in Jesus Christ. Clearly, getting sinners from the slavery of sins to believe in Jesus Christ for their freedom is a work, a serious business.

This work involves the vigorous preaching of the gospel, teaching the Word of God, healing, deliverance, prayers, fasting and other things to save people from the controlling power of the devil. God fills people He calls, prepares and sends them to do this work in the world. Thus, the greatest duty of true apostles, prophets, evangelists, bishops and teachers and other workers of God is to get people to believe in Jesus Christ.

To believe in Jesus Christ is to completely trust, have faith in Him and commit to the saving grace that is vested in His name and the message of His death, burial, resurrection and second coming. To believe in Jesus Christ is to be willing to be taught about Christ, learn about Christ, know Christ, live the life of Christ, grow in Christ, conform to the image of Christ and eventually leave this earth to be with Christ forever.

People turn to the Lord as ministers preach the gospel of salvation and teach God's Word in cities, towns and villages throughout the world. Thus, servants of Christ do the work of God, by the spirit and grace of God. They carefully do this work by getting people to believe in Jesus Christ. Anything we do or say that gets people to believe in Christ constitutes the work of God, but deeds and speeches which make people disbelieve in Christ actually form the work of the devil.

“Go therefore and make disciples of all nations, baptising them in the name of the Father and of the Son and of the Holy Spirit, teaching them to observe all that I have commanded you. And behold, I am with you always to the end of the age” (Matthew 28:19-20).

However, unbelievers do not consider the work of God any serious work. They mock and scoff at it. They cannot see how they will perish on the last day, but rubbish the work of salvation. To them, getting people to believe in Jesus Christ is a foolish work, but to those who are being saved, it is the power of God and a noble work.