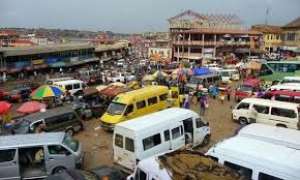 Drivers at the 37 military station and Tema – Ashiaman are asking President Akufo-Addo government to as a matter of priority expand and maintain their stations else he (Akufo-Addo) will smell pepper in 2020.

The Station Master, Mr. Modaseru Braimah at the Tema – Ashaiman station indicated that the congestion at the station is causing a lot of choas due to lack of space.

He said they have made several complaints to the authorities but yielded no result.

“We have complained to all traders selling at the station to put their stuff on a table and sell so that the place will become very portable which can enable drivers to also park their vehicles well yet they wouldn’t listen.

“Passengers refuse to patronize our station whenever it rains due to its muddy state and this is causing us to lose so much money.

“Nana Addo Dankwaah Akufo-Addo should come to our aid else will embark on a demonstration which will bring the nation to a standstill. If the government continues to turn a deaf ear to our calls we will halt the country’s development and teach him lessons in 202, ” they fumed.