All On Board: My Success Story 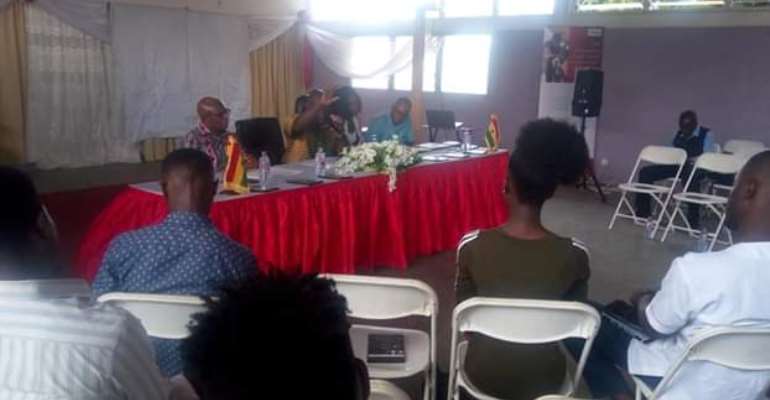 I first heard about the “All On Board” film project a few days to its premiere in 2018 but I have always loved film.

I wasn’t present during the days of Nigeria’s first film put on video, Soso Meji produced by Ade Ajiboye in the year 1988 or even during the time of Kenneth Nnebue’s Living in Bondage in 1992, which shot Nigeria’s film industry into the limelight, but I still remember the days of Super Story and Papa Ajasco. Not forgetting Jenifa’s Diary which cannot be left out of Nigeria’s filmmaking industry, which by the way is the second biggest film industry in the world; can imagine that as at 2004, four to five films were being produced each and every day in Nigeria alone?

Regardless of the controversies surrounding the relevance of the film industry of my dear beloved country Ghana, I acknowledge the impact of Cantata, Taxi Driver, Dada Boat, Sun City, Efie Wura, King Apaw’s No Time To Die (Kukurantumi-Road To Accra), Chorkor Trotro; the good old I Told You So and award-winning Ekow Ansah’s Heritage Africa.

I have so far attended two filmmaking training programmes at YMCA Accra Central branch, and those two are the only professional filmmaking training programmes I have ever been to (both of which are a continuation of a project dubbed, “All On Board” project which started last year). Aside that, I’ve also attended two filmmaking related programmes: 2019 Kick-Off Conference and the maiden edition of YMCA-Weltfilme.org Filmmakers Chat also by the same organization, YMCA. 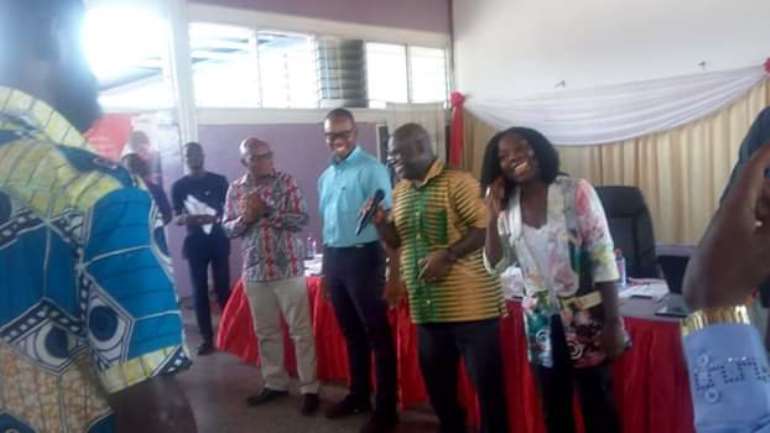 I never understood my interest in watching names of cast and crew crawl up when a movie is over just as much as the movie itself until I began to aspire to be a filmmaker about three years ago. My dad always complained as to why I turned the volume of the TV so high whenever I was watching a movie. I wanted to hear the sound effect attached to each line the actors said, how it correlated to each scene, setting and the premonition it sought to achieve. 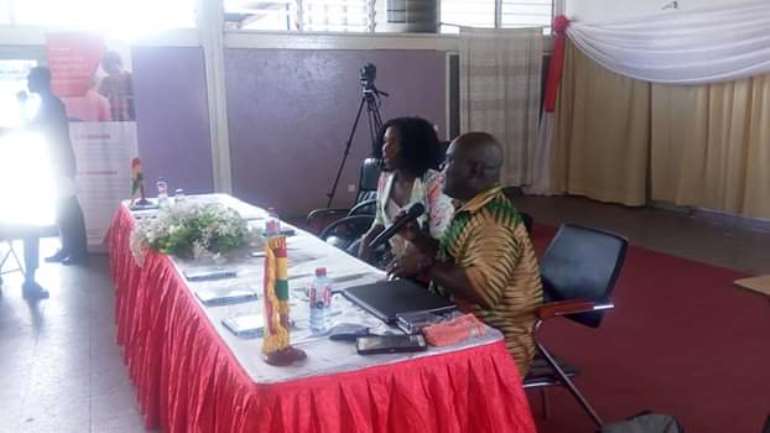 Thanks to YMCA I’ve met the best of filmmaking crews who happen to be either trainers or speakers at their film training and filmmaking related events respectively. I don’t have to watch a film from award-winning filmmaker, Kwabena Eddie Mankata before I see how gifted he is. The way he handles his trainees during film training sessions should instantly tell you that he’s definitely got something to offer to the Ghanaian film industry. I was absolutely stunned from what Jeremiah Nyekoeza made of shots (both still and motion pictures) from just a phone. I was inspired by Miss. Esene Sorpkor , a cinematographer and trainee at the film training programme I attended because she spoke of not conforming to the stereotype of most females being mostly on camera, encouraging us to stay focused and do what we want to do regardless. 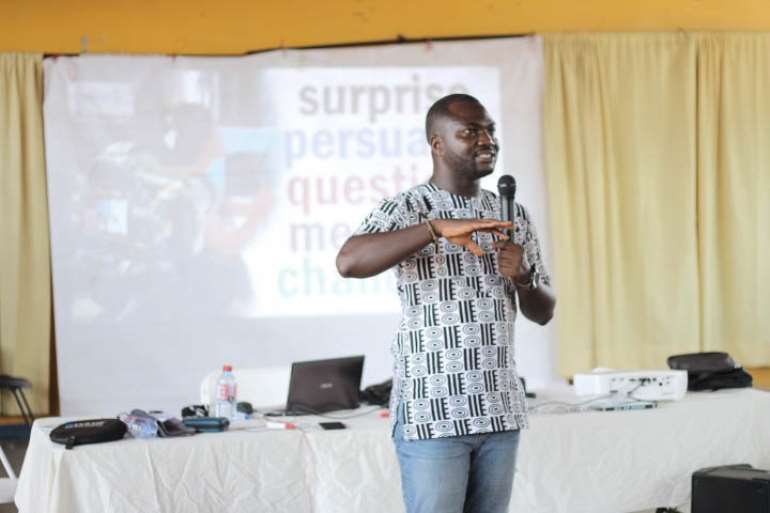 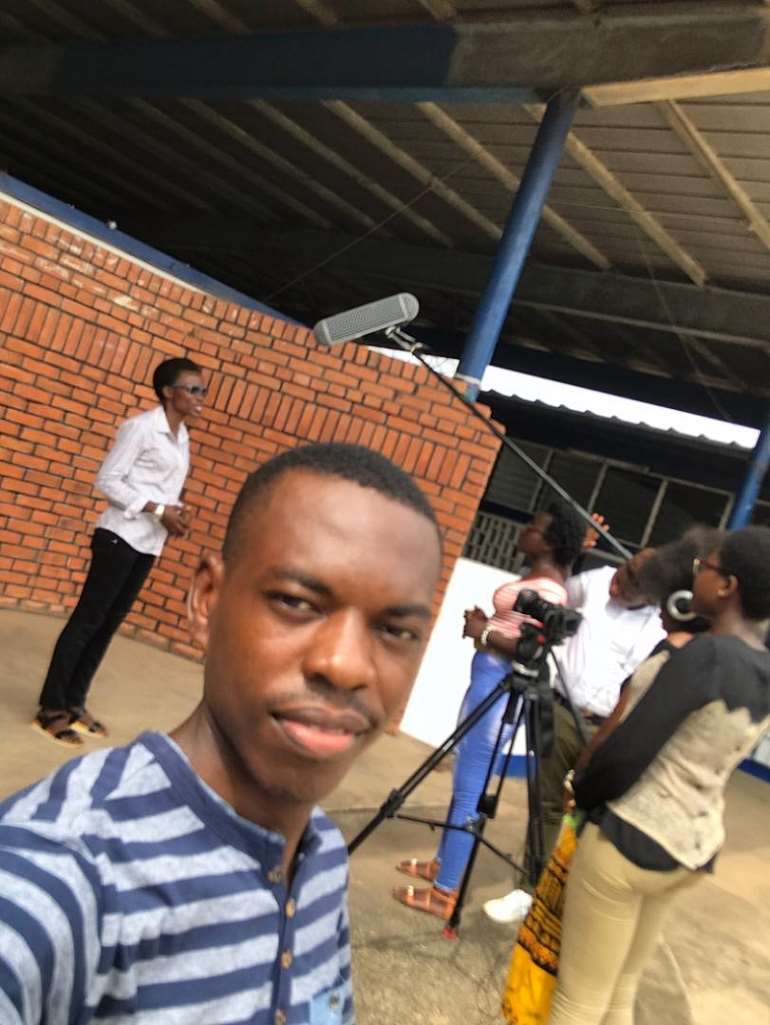 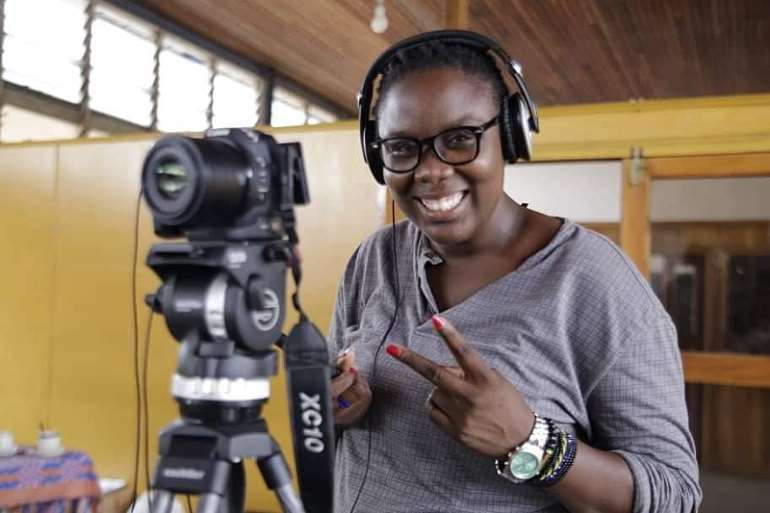 I have had the chance to interact, share ideas and unconsciously create a formidable network with other young aspiring filmmakers from YMCA filmmaking training programmes. The film training also provided additional practical work to support the Visual Communication course i had learnt in a particular semester in school. The practical aspect I had from school only covered photography while that of filmmaking was of only theory. The best I got from school with regards to filmmaking was watching and discussing some selected documentaries and fictions in class. 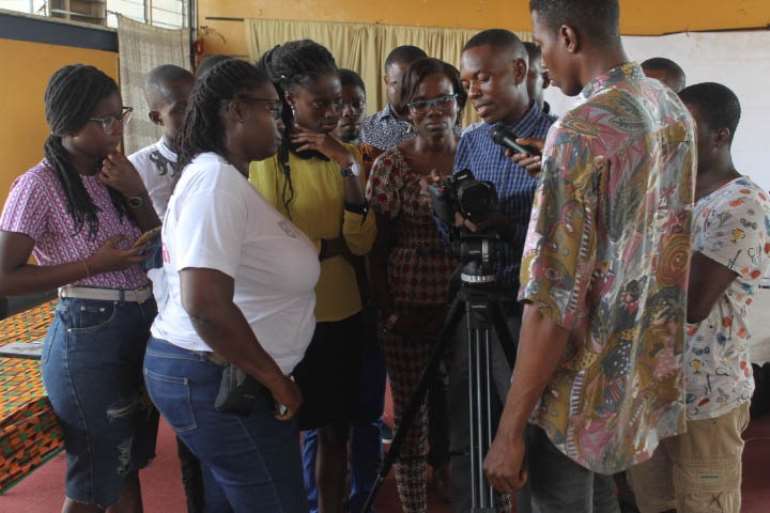 The filmmaking journey that YMCA is taking in partnership with others is not like making other films for just entertainment. They are helping aspiring young filmmakers to make films that seek to address societal issues, and that is what I’ve always wanted to do. I learned from YMCA that there is more to filmmaking at just the entertainment aspect of it. There’s a business side and there’s also a side where one gets to impact society positively. Movies are a representation of people’s lives, culture, history, problems and sometimes a prediction of a people’s future. Film is a tool for social change if used meaningfully. 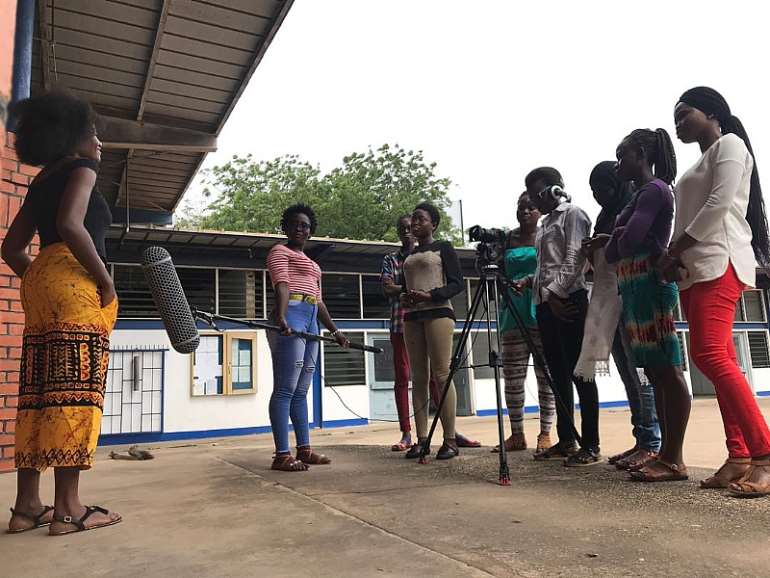 In one of the short films produced out of the All On Board project, immediately I saw “Afia’s” father, I knew he had a kidney problem. The case was opposite when I personally met him. I saw “Mawuli” recently, and he has no tribal mark which was quite visible in the film, Tribal Zone. The use of make-up wasn’t exaggerated; just the right amount to achieve the effect needed for the film, Tribal Zone.

With YMCA, I know that all is not lost for Ghana’s desire to start telling the Ghanaian story in the Ghanaian way and that of Africa at large. The most exciting of all the benefits I’ve ever had from YMCA-Weltfilme.org filmmaking training is the assurance of technical support I can readily access when I am ready to make my own films, I mean how exciting is this! 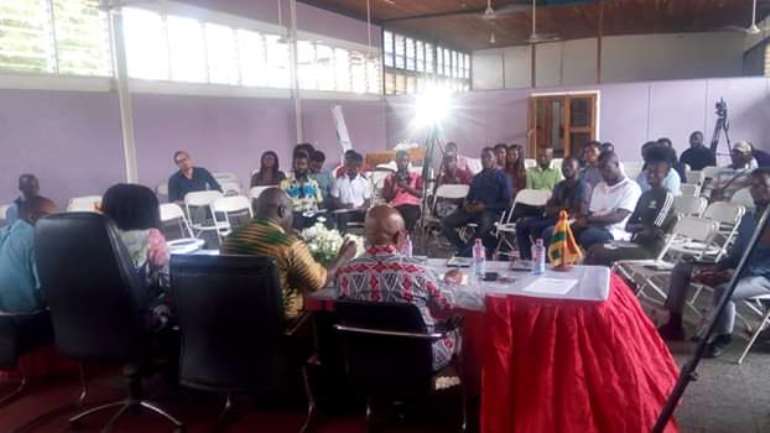 Talking of our good old Ghanaian movie industry, I recently found a gallery that has posters which were once the product of a much larger industry known as the “Ghanaian Mobile Cinema”. By sewing together two used flour sacks, a perfect sized canvas for a movie poster was created. Deadly Prey Gallery is a space dedicated to West African poster and sign art created by brother & sister duo Brian and Heidi Anne Chankin. 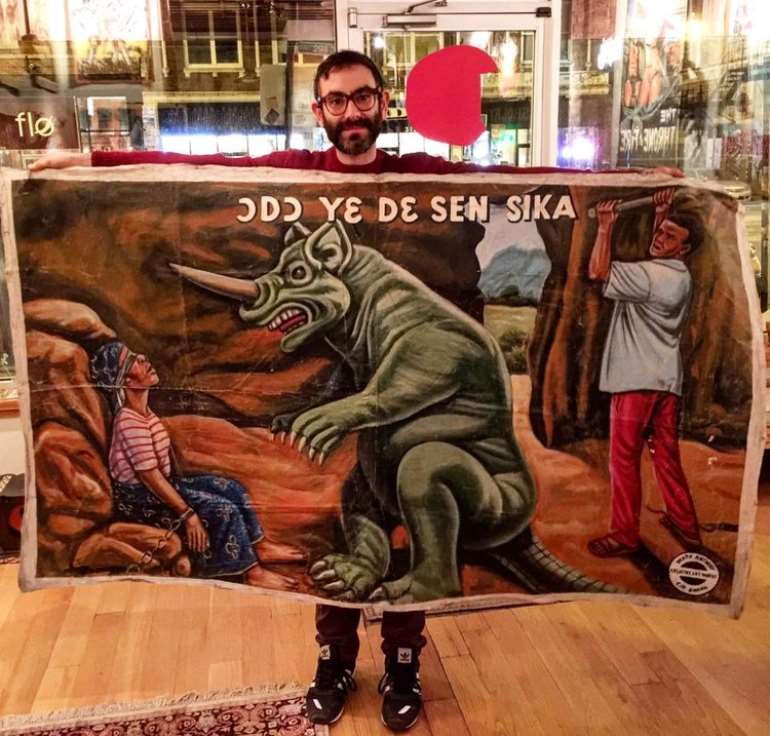 The “All On Board” project which birthed six films by young filmmakers from Ghana, Liberia, and Sierra Leone is a project by YMCA, partnered by Weltfilme.org and others; and with financial support from BRUT fÜr die welt and Federal Ministry for Economic Cooperation and Development.

The Ghana Young Men Christian Association (YMCA) is a membership, non-governmental and nonprofit organisation that has remained a forerunner in youth and child development programmes in many parts of the country. As a member of a global association, it upholds the Universal Africa YMCA’s vision to empower young people for the African Renaissance.

Just in case you were at the just ended maiden edition of the filmmakers chat, this is exactly what I had wanted to say when I was called up to share my success story but it turns out I’m not good at verbal interactions as at writing, and I’m sure that if your case is the vice versa of mine, you’d be wondering why too but I guess we all can’t have our cake and eat it too, can we? 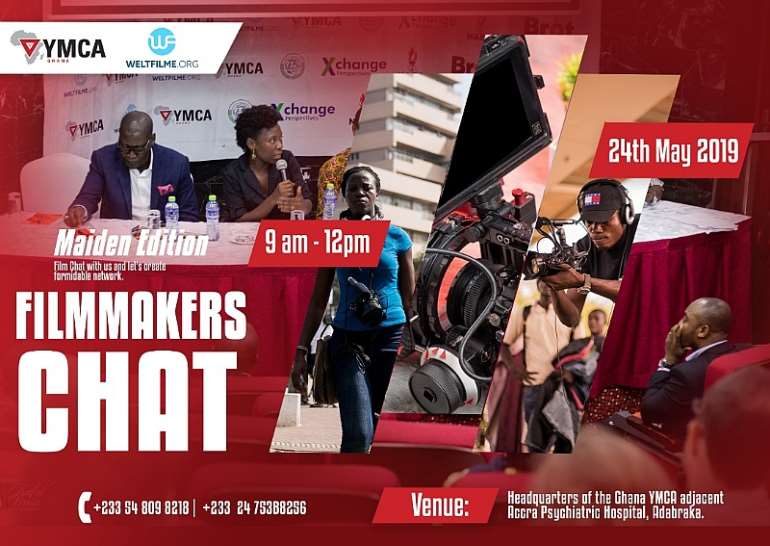 Sensitize School Children On Wearing Face Masks Before And A...
22 minutes ago