Armed group in C. Africa to lay down weapons 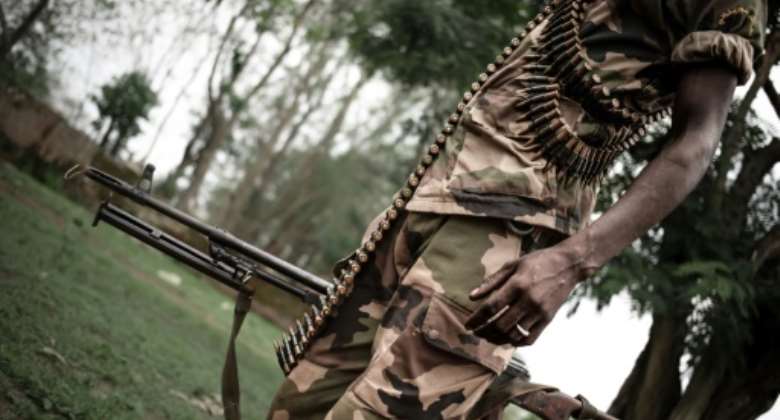 More than three-quarters of the territory of Central African Republic is in the hands of militias. By FLORENT VERGNES (AFP)

The 3R militia group, blamed for the massacre of more than 50 civilians in the Central Africa Republic this month, has pledged to lay down its arms within the next two weeks, the country's interior minister said Friday.

Militia leader Bi Sidi Souleymane, also known as Sidiki, "gave his word on disarming his troops, which should take place within two weeks from this Friday," Henri Wanzet told a news conference at the airport in Bangui.

Wanzet had met with the 3R leader in Niem-Yelewa, in the west of the country, along with other government ministers and representatives of a UN mission in Central Africa Republic (CAR) and the African Union.

"We met Sidiki who acknowledged his group's responsibility for the massacre," Wanzet told reporters.

The massacre on May 21 in villages near the northwestern town of Paoua, close to the border with Chad, was the worst single loss of life since the government and 14 militias signed a deal in February aimed at restoring peace to one of Africa's most troubled countries.

According to a UN source, the 3R group -- which gets its initials from "Return, Reclamation and Reconciliation" and claims to represent the Fulani, one of the country's many ethnic groups -- hosted a meeting with the villagers and then gunned them down.

The militia has already handed over three members to the authorities, describing them as rogue elements who murdered the civilians, but the government has maintained an ultimatum for the group to surrender six other suspects and dismantle its roadblocks.

On Thursday, 3R agreed to take down the roadblocks, and Wanzet said the group had now also agreed to search for the other suspects "who have fled the country."

In early February, warring sides signed a peace agreement negotiated in Sudan's capital Khartoum with groundwork done by the African Union from 2017, the eighth deal aimed at resolving conflict in the CAR since 2013.

In the patchwork of ethnic and religious communities making up the country, 3R claims to represent the Fulani people, who traditionally include the semi-nomadic herders of west and central Africa.

Call e-levy a VAT increase and stop distorting our well esta...
59 minutes ago