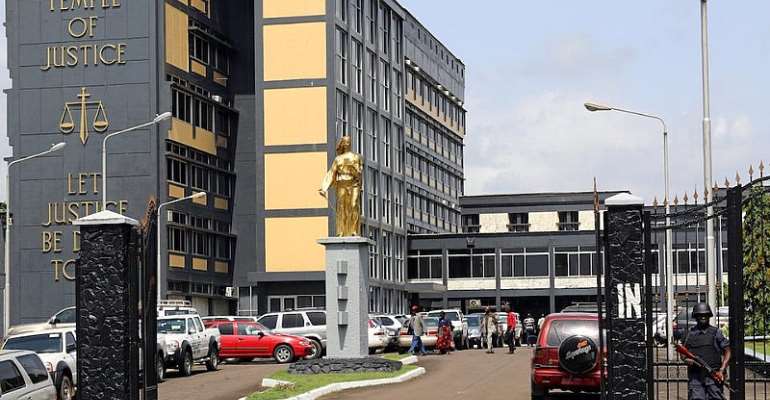 Liberia is in a revolutionary gestation. The mood on the streets and the tempo of the popular classes, the attendant ambivalent and confused posture of the ruling circle, struggling to extricate itself from its own devices, but yet stewing and juicing in its own internal contradictions, the Sisyphean posture of the law enforcement apparatus, and the masses not wanting to be led in the backward way—in the way of inequality, corruption and misrule—are clear expressions of a revolutionary situation.

Confronted with the popular uprising of the masses of the people on June 7, the degenerate Weah regime has become a political corpse and the protest day could just be its death sentence. It has thus resorted to use echo chambers and hired proxies to wrongfully, in connivance and contrivance with the puppet Supreme Court, to wrongfully apply the law in order to prohibit the protest. Earlier, the regime designed anti-protest propaganda that sparked a political cause celebre on social media and littered with the trendy garbage that protest destroys a country rather than it being an authentic tool of democracy used by the producing masses to petition the government of the day to address imbalances and seek redress for grievances. Yet the desired result has been far below expectation. With an extreme horror for protest, the Weah regime even went further to sanitize fabrications by condemning victims of the April 14 1979 brutal massacre at the hands of Tolbert’s brutal security forces, while vindicating the orchestrators of armed violence on the unarmed and defenceless masses. Again, that historical revisionism was defenestrated by the Liberian masses. The regime even sent deadwoods of no IQ in communities to lecture the masses of the people against taking to the streets on June 7 to express their authentic displeasure at the dire straits economic conditions, the unbridled corruption of Weah and his hangers-on, the stinking incompetence of the government, its sickening indifference to the collective plights of the masses, and the dastard accumulation on the ruins of the public treasury since its ascent to political power. Once more the Liberian toilers listened not to the rented mercenaries of the administration.

Clearly, all these reactionary tactics have become exercises in futility. Each time the regime designs new orchestrations to discourage the masses from taking to the streets, the more the basic masses with a quantum increment in consciousness become embolden, with even new layers of the dominated people in the society joining the caravan and openly endorsing the protest. Every time Weah takes to the airwaves to spit out lies and to justify the spate of scandals, the naked corruption, his construction of condominiums and ducal villas , his junketing dubbed as foreign trips, his insatiable appetite for sleeping in pen houses while on foreign trips, his carousing all night with little attention to solve the economic crisis, which is recalling casualties from the deaths of Liberian sufferers to children dropping out of schools—all have provided an added impetus for the masses to even call for his immediate resignation. As every bit of illusions the people had in him have since fizzled away and thus they have seen through him as an arch-misleader who is more interested in infamous accumulation and material splendours rather than concerned about addressing the imbalances, dislocations and contradictions that propelled his election—that is if we are to blind our eyes to the naked and open rigging of the election by Ellen Johnson Sirleaf and her rotten cabal for him in order to cover her tracts and continue a de facto third term.

The Weah kaiksotrocracy is not only a useless lot, but also steeped in arrogance and blind to reality. It is fixated more on its subjective desires than a deep study of the objective realties in the country. This all the more has pushed it into a blind alley. In such a condition and with the crude determination to prevent the protest from being held, the degenerate regime has hired the shyster and spiv Arthur Johnson to file a writ at the discredited Supreme Court in order to prohibit the protest. What a shameful spectacle by circus clowns playing at being political clairvoyants, but are living on borrowed time!

We must tell these political jerks that we have studied law in class society and its purpose in bourgeois democracy and neo-colonies—the class interests its serves, its victims as well as the class which benefits from it. We don’t buy the bourgeois garbage that ‘’the law is blind’’ and ‘’impartial’’. In a class society, the law is used by the possessing class to further its own interests, to preserve bourgeois property rights, to sustain the monstrosity of the state, and to exploit and oppress the dispossessing class. Long-time ago, the Athenian statesman and poet in Solon made this observation about the law: “Laws are like spider's webs: If some poor weak creature comes up against them, it is caught; but a big one can break through and get away.” So for Chief Injustice Francis Korpor and the simpleton Johnson to think they can hide their political prejudice, contradictions, and moral weakness under legal mystification and obscurantism by using the court to sabotage a popular outburst of anger against the impotent government must know that they are up for a rude awakening.

Long time ago Alzheimer’s disease usually affects individuals at an old age, but it seems Weah, at a fairly young age, shows every sign of this illness. It is now important that we take seriously a study which says that continuous heading of football creates a terrible memory problem for an individual in the long run. Perhaps this is what is affecting George Weah, perusing his actions, inactions, and ignorance. With Weah’s contradictions, posturing and hubris, one is tempted to say the study is authentic, as no sound mind in a sound body would think the masses of the people will honour a scandal sheet of a writ on the June 7 protest. Anybody thinking otherwise must either be political stupid or living in dystopia where reality is upside down. We intend to honor no diktat from a court which is a contradiction of its previous legal opinions and which has lost every degree of legitimacy.

Francis Korpor and the judicial gangsters at the Supreme Court are comfortable with injustice and are enablers of the ruthless violation of the law by Weah and his gang. But we tell this Korpor who has no scruple that he and his people are fanning the flame of tension in the country by becoming slavish puppets of Weah, as their predecessors refusal to fairly and impartially dispense justice set the stage and resorted into the massacre of approximately 250, 000 of our compatriots. However, in any case when a revolutionary upsurge enthrone a popular establishment at the helm of leadership, Korpor and others must be told that the Nuremberg precedent for making judges to account for dispensing wrong verdict will be ignited against them.

The least Korpor and his black gown wearing traitors can do is to shut up. Or if they like, they can amuse themselves, but all of them on the so-called Supreme Court Bench will feel the revolutionary wrath of the people for selling justice, for compromising the law, for the illegal removal of the activist-justice in Kabineh M. Ja’neh, and for turning the legal arena into the playground of the rich and powerful, the masonic craft, and all the cultist formations in the country, against the interests of the poverty-stricken and ordinary people whose effort to seek justice have always been repaid with injustice. We will take no order from Korpor, Wollokolie, and the other ex cetera on the bench. In fact, they must be put on notice that any rising of the people will sweep all of them political debris away to begin an authentic process of national development and progress.

As Issa Shviji admonishes us to learn the “Weapons of Theory”’ before learning the theories of weapon, we are reading Fidel Castro’s “History will Absolve Me” speech, which he delivered after the first outing of the 27th of July Movement against the hated Batista regime. Furthermore, we must also tell Korpor and others that we are taking Fanon's exhortation that naked violence, and in this case state violence through wrongful legal opinions of the Supreme Court, must be countered by greater violence-- in this case revolutionary defiance and rejection of illegal verdicts or opinions.

Jose Marti teaches us: 'The man who abides by unjust laws and permits any man to trample and mistreat the country in which he was born is not an honorable man ... In the world there must be a certain degree of honor just as there must be a certain amount of light. When there are many men without honor, there are always others who bear in themselves the honor of many men. These are the men who rebel with great force against those who steal the people's freedom, that is to say, against those who steal honor itself. In those men thousands more are contained, an entire people is contained, human dignity is contained.”

While Francis Korpor, George Weah, Arthur Johnson, etc. are designing this scheme, we tell them the people have always developed the fortitude to struggle against oppression and dictatorship. Humans have always fought to untie themselves from bondage and bask in freedom. Since antiquity from the days of barbarism to savagery where men developed stone tools and other metal materials, they did so to not only conquer nature but to have that freedom to enjoy nature. Every epic progress in human history is about pushing towards freedom, more freedom, just freedom. This motivation to push for freedom cuts across races, continents and geographical locales. It is in this tradition of wanting to freedom and to make their own history that the Liberian people will organize to push this dictatorship which is destroying the social fabric of the state.

We say the task at hand requires neither timidity nor cowardice. The struggle before us is a tough decision of choosing to condone repression or to fight for freedom. It is a decision to allow ourselves to sit in collective emasculation and watch the nation slide into the abyss. It is a choice to stagnate in collective cowardice or put up fierce defence for the homeland. All men of conscience must at this epoch in the history of our country stand up and reject the gangsterism and lawlessness of the Weah clique which has no idea to transform the nation, but to strive on vices and to ignite chaos. There is one and single compelling historical obligation: stand up for the nation; restore its pride; end this charade or this charade will end us!

With the torches of resistance, with the banner of revolution unfurled, with the consciousness of patriotism, with the flame of the people's power ever lit, we will not retreat-- as in this game where battles and struggle are decided by blood and ecisive actions -- we will not surrender. Soon as in soon, the homeland will be a free territory in black Africa. Together, in oneness and joy, the masses will enter on the stage of history to start the process of authentic transformation!

No to state of emergency! No to writ of prohibition! No to Martial law! Down with the Weah government! Down with Francis Korpor! Forward to the African revolution through the Liberian frontier!

Struggle forever! Kiadii writes from Accra, Ghana, and can be contacted via [email protected]