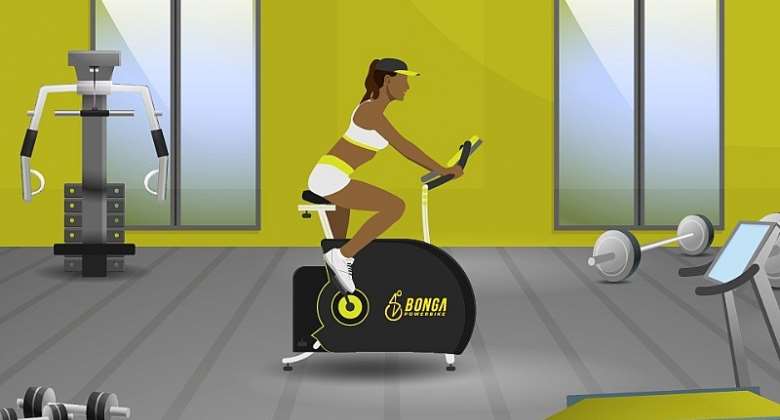 Almost every single day there’s a startup enterprise coming out of Africa. Within the many African business concepts, there are some worth highlighting and shedding light on. The following is one that has built a prototype gym bike to solve issues with health and electricity in Cameroon and elsewhere.

This bike is called Bonga Power Bike and it was built by Bongajum Lesley Ndzi of Cameroon. During his childhood and adulthood, he experienced lack of electricity or power being cut off at home and school. Bongajum’s day-to-day activities that required electrical power couldn’t be counted on 24/7. Thus, an alternative solution was necessary.

When it comes to the science behind electricity, it is physical or chemical energy that allows for light, heat, and machines to exist and work. According to Bongajum, ‘‘Energy can neither be created, nor destroyed, it can only be transferred or converted from one form to another.” Therefore, he brainstormed on ways energy could be used during physical exercise, such as pedaling a gym bike to then generate electricity.

After exploration and experimentation, Bongajum successfully built a working prototype using abandoned car, motorcycle and bicycle parts from around his neighborhood , which goes to show that “another man’s trash is another man’s treasure.”

The way this prototype innovation works is through pedaling the bike for a duration of time. The person riding it exerts human energy on the flywheel . This flywheel turns an electric motor and within that electric motor there are coils . As the coils are turning, it produces electricity through electromagnetism. Electricity produced from it is stored in a battery. Whereby, it can now be used for many things. It is direct current that can convert into alternative current.

By spending 30 minutes on the Bonga Power Bike, one can produce enough electricity to light up 7 light bulbs for 12 hours . This bike has the capabilities to light homes, charge phones, power fans, and turn on television . Moreover, it can provide electricity to communities, schools, and hospitals. Thus, a huge game changer!

Besides the accolades and awards of Bonga Power Bike so far, such as the NEXT GEN in the Franchising Global Competition, the GAIA AgTech Innovation Challenge, and most recently the 2019 African Youth Energy Innovation award , the potential impact it will have is very positive and tremendous. That is, a gym bike being able to improve health and provide electricity at the same time. It is an innovative solution and product to be sold to the masses.