Ghana In A State Of Collapse; Liberating Aisha Huang Is A Shame To Ghana’s Independence! 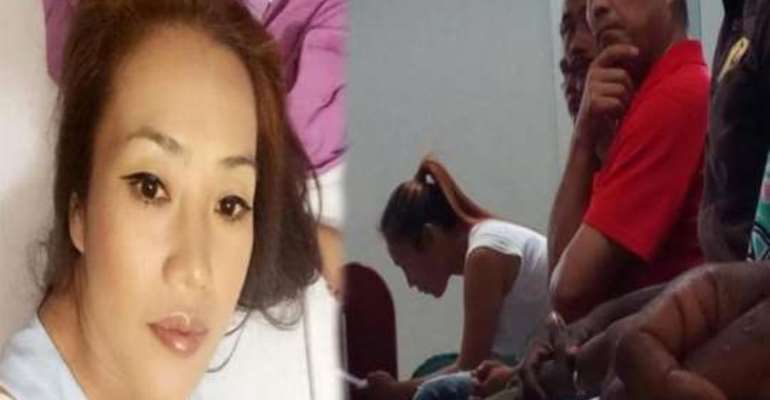 This article is to contribute to the current issues we are faced with as a country and the actions our leaders took as a way of dealing with the issue. It is not meant to create confusion whatsoever but to condemn government actions towards the release of the Galamsey Queen so called. All the views on this article shall be drawn from the below statement made by the senior minister, Mr. Osafo Maafo.

“We have a very good relationship with China. Today, the main company that is helping develop the infrastructure system in Ghana is Sino hydro, it is a Chinese Company. It is the one that is going to help process our bauxite and provide about two billion dollars to us. So when there are these kinds of arrangements, there are other things behind the scenes. Putting that lady (Aisha) in jail in Ghana is not going to solve your economic problems. It is not going to make you happy or me happy, that's not important, the most important thing is that she has been deported from Ghana.” Mr. Osafo Maafo said.

I am totally demoralized by the senior minister’s attempt to water down government’s horrible use of its discretion with respect to the deportation of Chinese Galamsey queen Aisha Huang, who was on trial for her illegal mining operations in Ghana with the other four colleagues. As a leading member of government, I expected a lot of wisdom from him but what he exhibited lucks direction. However, his attempt to justify the lack of prosecution of Aisha Huang on the basis of Ghana’s relationship with China and the prospect of receiving $2 billion under the Sino hydro bauxite project is obnoxious and bad-mannered to all of us Ghanaians who have worked hard to bring about an end to illegal mining activities. We must protect the interest of our country especially the citizens. We should not in any circumstance compromise the lives of Ghanaians for anything as no a good leader in his right frame of mind will do that. I wonder! Why won’t Donald Trump call us “shit-hole” countries? Our leaders don’t reason at all and this affirms the statement that, ‘once one is safe, he/her thinks of no one else’.

Since 2012, fathoming Ghanaians have been disparaging and vehemently execrating the illegal Chinese and other foreign miner’s unpardonable shenanigans for illegally mining our natural resources, and in the process destroying our lands and water bodies. It is, therefore, not surprising that many Ghanaians have found a cause to aerate their poignant disgust over the sudden abandonment of the court case involving the notorious illegal Chinese miner, Aisha Huang and the onward deportation to her home country, China. Aisha Huang, an influential Chinese illegal miner, we were realistically told, became somewhat untouchable during the previous NDC administration. This may explain how and why in the face of overwhelming evidence, the celebrated Queen of illegal mining, Aisha Huang, was arrested and released on several occasions during the Mahama’s administration.

The preferential treatment accorded Aisha Huang under the erstwhile NDC administration thus gave rise to speculations that some top officials within the government were having a special relationship with the enemy within. How ignorant and blame our leaders sometimes tries to portray, trying their best to sale the sovereignty of their state. Why can’t they just be realist for once!! Somehow, the Mahama administration did not have the commitment and willingness to investigate, prosecute and sentence the outrageous illegal miner, Aisha Huang, who was openly stealing our natural resources and destroying the environment in the process.

Credible sources have it that the erstwhile NDC government nabbed and deported over 5,000 illegal Chinese miners, including suspected murderers, and, inexplicably left the beloved Aisha Huang off the hook. How bizarre? It was against such backdrop that some of us were extremely ecstatic when the NPP government took on the hardened Chinese illegal miner, Aisha Huang. Please, do not accuse me of embellishing the problem confronting Ghanaians. For, we are probably dealing with criminals who have been released from prison in China, and have made their way to a “paradise” called Ghana. The Chinese never give up. They will never give up their pursuits. Whatever they pursue, they become experts and innovators in that field. They are never bogged down by failure. For them, failure simply means another shot to be successful. How then can we develop despite being bless with these abundance of natural resource? No wonder we have them yet we borrow monies from other others to finance domestic activities! We must reason again, we must learn to take measures by ourselves, though, we do business with china we don’t have to take their nationals lightly or for granted to have been committing crime and going scot-free. They must be made to face or test our laws, if this were a fellow Ghanaian, you can imagine what the leaders would have done.

Meanwhile, it is an incontestable fact that the illegal Chinese miners are being encouraged and abetted by some greedy and unpatriotic Ghanaians. I have always maintained that per the illegal miners' stubbornness, I shudder to think it would take a massive leadership in order to curb the illegal mining activities. But my problem is that, even after Anas Arimiyaw Anas exposure on the illegal mining activities, what actions have our leaders taken towards it. The atmosphere was hot during that time but after some few week, the matter died out, what have we to do. This simply means that, our leaders have a stake on everything that is happening if not that, a common woman we cannot have her face justice considering the enormity of her crime? That said, what we cannot do is to take a cue from the United States of America, who put in place punitive measures in their attempts to halt the Chinese illegal miners' invasion in the19th and 20th centuries.

In the mid-1800s, the Americans were confronted with a similar predicament -the invasion of the illegal Chinese miners. So in their desperate attempts to halt the seemingly pernicious blitzes by the incompliant illegal Chinese miners, the American authorities were forced to proclaim draconian immigration laws which targeted the illegal Chinese miners. Large-scale Chinese immigration began in the mid-1800 due to the California Gold Rush. But despite the flood of Chinese immigrants during that time, their population began to fall drastically, because of laws such as the Chinese Exclusion Act and the highly imbalanced male to female ratio.

The story is told, that miners in the area often used violence to drive the Chinese out of various mines. While impatient gold-seekers would abandon prospective rivers, the Chinese would remain, painstakingly panning through the dust to find bits of gold. It would appear that the Chinese have an eye for gold. As time passed by, the resentment against the Chinese immigrants in America increased, and eventually, the laws such as Naturalization Act of 1870 and the Chinese Exclusion Act of 1882 came into force to restrict immigration of Chinese immigrants into the United States of America. The Naturalization Act of 1870 restricted immigration into America to only "white persons and persons of African descent, meaning that all Chinese were placed in a different category, a category that placed them as ineligible for citizenship from that time till 1943.

Of course, the stance taken by the American’s to circumscribe the influx of the illegal Chinese miners was extremely retributive. Nevertheless, to the Americans, the apparent harsh decision helped in their efforts to curb the illegal Chinese miners' invasion. In any case, we may not be able to go the way of the Americans. However, we can still manage to thwart the activities of the recalcitrant Chinese illegal miners. Sometimes when we are making policy transfers, we have to be careful and I am even surprise that we cannot make our own decisions but seek help from other’s to take a final decision on what to do with unscrupulous individuals who are causing us more harm than good. What is the use of the people’s parliament in Ghana, is it that they cannot longer decide or represent us? I think we have to emulate the South African House of representatives where Julius Malema and co influence strongly the making of better decisions for the country. I have no doubt whatsoever that some Chinese immigrants secured authentic visas to enter Ghana, but I am not sure whether the Ghana Embassy in China did grant visas to all the Chinese immigrants to come and undertake mining in Ghana.

Whatever the case, the Ministry of Foreign Affairs must endeavor to investigate the granting of visas by the Ghana Embassy in China, per the influx of illegal Chinese miners in Ghana. It is, however, incumbent on the Ghana Immigration Service to put ‘tabs on the illegal Chinese who are bent on laying their hands on our natural resources illegally. This is indeed a serious issue and must, therefore, be treated with all the seriousness it deserves. I must also venture to stress that our relations with China must not and cannot be the standing block in our efforts to bring the offending Chinese illegal miners to book. The migrants must, however, remember that: ‘once they are in Rome, they must do what the Romans do’. In other words, they must be prepared to conform to the laws of the land at all times. It is pretty obvious that the illegal miners are taking advantage of the absence of monitoring and enforcement of the existing laws and regulations. If that was not the case, how on earth could foreigners seize our countryside, steal our gold and destroy the environment? We (Ghanaians) have enacted expedient laws, albeit the monitoring and enforcement are carried out with a stark perfunctory, or often non-existent.

In sum, we can thwart the activities of the illegal miners through a collaborative effort, involving the central government, the Ghana Embassy in China, Ghana Immigration Service, the Police Service, Ghana Minerals Commission, the National House of Chiefs and all discerning Ghanaians. We are the cause of our own suffering and must be very cautious.

I always stand for the interest of the people and together, we shall fight for the change want deserve. Our leaders mustn’t sleep in power but work to protect our state, a woman can’t destroy a whole country and live freely. I always miss the days of the PNDC.