Why The Phrase Boys Will Be Boys Must Be Stopped 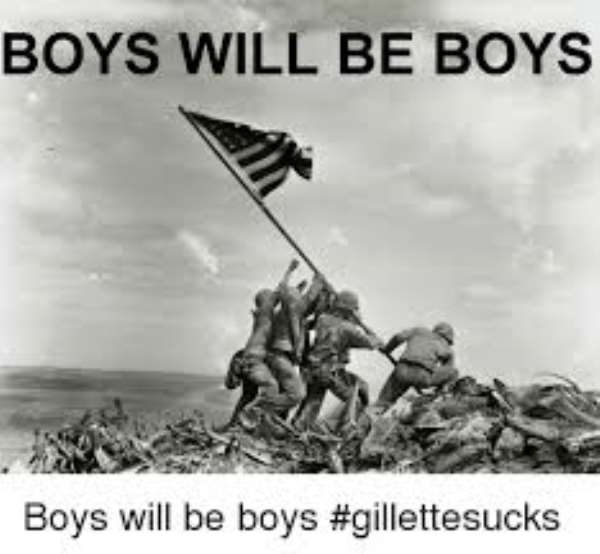 Boys will be boys is an idiom we hear tossed around far too often but, what does it actually mean, and why did we ever start saying it? And … what about girls—who or what will they be? And “who even decided boys will be boys” anyways? The phrase boys will be boys was first recorded in English in 1589 but originated from a Latin proverb: “Children (boys) are children (boys) and do childish things.” While a bit obvious, if it had remained intact as such, it wouldn’t be so problematic to me because, children in fact do childish things, and that is to be expected to some degree.

Like a bad game of Telephone, however, the phrase has mutated over the years into a frivolous way to excuse the actions and attitudes of boys and men of all ages. It is typically used to explain boisterous or naughty behavior—things like jumping in sludge dawdles, roughhousing, and raising Cain. It is also, unfortunately, used to explain uncanny things like sexual assault allegations and other serious crimes. It does not hold individuals responsible for their behavior and choices but rather infers all males are preprogrammed to act in such ways. This kind of stereotype must be stopped.

The truth is that, men do behave in somewhat rudely towards others but the men I know, myself included, are protectors and respecters of others, especially of women and children. There are definitely the bad apples, but those exist on both sides. I choose not to accept that boys will be boys and to also speak out against it. I also choose not to blanket the hurtful and shameful experiences that a few women in my life have committed to all women in general.

Beyond that, the phrase “Boys will be Boys” rather promotes gender stereotypes and must be stopped. Let us be circumspect here, not all boys like to get dirty, some prefer roses to roughhousing and, thankfully, most men are not violent. Like the phrase, boys do not cry, it sets a standard for what male behavior should be. Instead of assuming men are individuals with unique personalities, it promotes that idea that anyone who does not live up to this arbitrary definition of masculinity is abnormal. It attempts to put a neat and tidy bow of oversimplification on individual behavior, and it is time we stopped saying Boys will be boys … and more importantly, stop believing it.

What exactly will girls be? Oh yeah, what about the girls? There is not a well-known equivalent phrase to describe females; girls will be girls is seldom heard. The phrase girly girl, espouses the same type of stereotypical thinking about what it means to be a girl, and big girls do not cry is used almost as frequently as the saying about boys. These phrases do not, however, offer the same blanket excuse for female behavior as boys will be boys. While this gap perhaps represents an example of inequality, the fact that such a phrase does not exist about girls should not be lamented on. Neither gender benefits from such stereotypical, overly simplified language and ideas. We need a simple world and those words must be stopped.

Women get protection from men and as a matter of fact, same women will cause the men to act and behave they way they do. Men or boys were not born that way, perhaps, the word since its origin emphasis children and we are aware that children during their tender age know nothing and act badly per what they perceive good. Whether Boys or Girls, we all started as children and behaved such manner but the problem is that most people still call men children because they think men or boys behave wickedly and would probably not change.

All these stereotypes would only cause us not fight among ourselves instead develop, the gender issues need not emphasis anymore…we must begin to see other each as equals and delegate roles or task to each other so we can have a peaceful world. What will gender differentiation benefit us? The world is changing and there are so many issues to deal with hence, we need not discourage each other. We have men who are good and other’s who are bad, same thing applies to women but the phrase should not be used to generalize the behavior of men because in the midst of wolves, we still have lots of good men who do not act or behave cowardly.

I truly want every child to grow up in a world that allows them to explore their strengths and express their personalities in ways that are true to them, not in ways that society believes boys are supposed to behave. I hope that by sharing some of this writing here, other parents and teachers may be able to work more actively to combat this misinformed approach to working with children, and allow our kids to explore and express themselves in ways that are authentic and healthy for them. This will hopefully minimize some of the academic gaps reported on here, as well as reduce some of the violence that many young men engage in, and allow gender-creative and transgender youth to be affirmed and supported in their home and school environments because boys will not be boys.

I always stand for the interest of the people and together, we shall fight for the change that we deserve. We must be “Positive-Active” people and live the stigma and the ethnocentrism and focus on pushing each other as we grow.