History Revisited; Renaming Of Universities In Ghana is A Bad Move!! 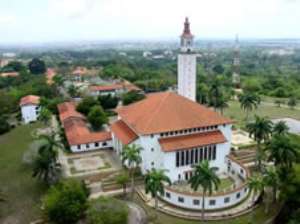 This is for the knowledgeable patriots who have raised hell over the (re)naming of the University of Ghana. May I ask for the source of their information? I mean, really? To create an issue over an issue that has not been made an issue can only mean that you admit but disagree that there is a case for that matter that is not yet a matter for that matter to indeed matter to you.

President Nana Addo Dankwa Akufo-Addo has proved beyond reasonable doubt his competence and integrity in running the affairs of the state. Perhaps, there might be some kind of flaws in the policies but a president who thinks like him is enough reason to admit that he is just doing well for Ghana. Per my view, the president has not thought of renaming the University of Ghana (UG), Legon, after anybody. It is true that the president has renamed certain universities like UMaT which is now George Grant University of Science and Technology and several other structures like the Flag Stuff House to Jubilee House among others hence, the president’s critics are debating and fuming over a non-existent issue. Critics on social media have been trolling the president after he recently said that his uncle, Joseph Boakye Danquah, who was one of the Big Six, founded the University of Ghana and an analysis of his statement means contrary to what the public are lamenting about, he was just giving credit to Danquah’s efforts.

It was frankly an honest statement which does not mean he wants to rename it. The president told an audience at the launch of an Endowment Fund to commemorate the school’s 70th anniversary and he asserted that: “It will be wholly appropriate and not at all far-fetched to describe Joseph Boakye Danquah as the founder of this University.” This is a true fact because if you read the history of UG, you will realize the effort of Danquah but the truth is that the school has been named after the state and that is splendid. The message the president was trying to put forward is that the British colonialists who built the university were inspired by J.B. Danquah when they initially intended to build for British West Africa, a single university in Nigeria.

“How felicitous was that decision and how greatly it has contributed to the growth of modern Ghana, it will be wholly appropriate and not at all far-fetched to describe Joseph Boakye Danquah as the founder of this University…. The fact which on the 70th anniversary of the university’s existence should be vividly recalled that all of us are the beneficiaries of his work,” Akufo-Addo said.

The president, since taking office in January 2017, has renamed a few state institutions including the Flagstaff House (renamed Jubilee House); Tamale Sports Stadium (renamed Aliu Mahama Stadium), University of Mines and Technology (UMAT), renamed George Grant University of Science and Technology; and the University of Professional Studies, Accra (UPSA), now renamed after its founder Nana Opoku Ampomah. The president’s reference to J.B. Danquah as the founder of the University of Ghana, therefore, sparked suspicions that he was testing the waters to rename the school after his uncle. Similar one is the renaming of UDS, with that I support the president because if UST was renamed after the first president of Ghana as KNUST then I see no difference if the president is renaming UDS after Rawlings. Rawlings has done a lot for Ghana and to keep him in history is the best thing that Nana Addo is trying to do.

Why would even changing the name of a school be our problem? The truth is that Society is dynamic and there have been countries like current day Russia which used to be USSR, and in Ghana, we used to have the University of Science and Technology which became Kwame Nkrumah University of Science and Technology, but having a school or institution name changed does not really change anything because, its core mandate will not change, the degrees it awards previously will still be valid and those it will award will still be valid. Let me rephrase: who started this debate that UG is to be renamed? Who asked for it and who promised to do the renaming? This certainly was not the intention of the President’s speech at Legon. My question is what are you debating against? Or can’t we review our history as a country? I guess there is such a thing as shadow issue.

The president has encouraged us in his inauguration speech that we (citizens) should not be spectators but we should be citizens, this clearly shows that, we should be part of his government and criticize constructively when he goes wrong. This also shows that he (the president) will not undertake any action without involving the public. Therefore, we have to support him in all things he does. The president has us at heart and the only problem is that fact that the state has gone through a lot and need serious restructuring. We, therefore, have to give him more time to restructure the state. Even because there is not enough time for him to do a lot per what the constitution has stipulated, Rawlings advocated their tenure of office be extended to five years. This is a good thing that needs to be given a second look at.

The president would not just go renaming schools but put mechanism to improve their systems, and the citizens must learn not to follow the crowd but do their own analysis of whatever information they hear from the public before they act. If we do not build trust for our state apparatus, they cannot do their work properly. Legitimacy is the most important concept that legalize the works of our leaders and as a result, we have to give them the maximum respect and support.

I always stand for the interest of the people and together we shall fight for the change we always wanted.