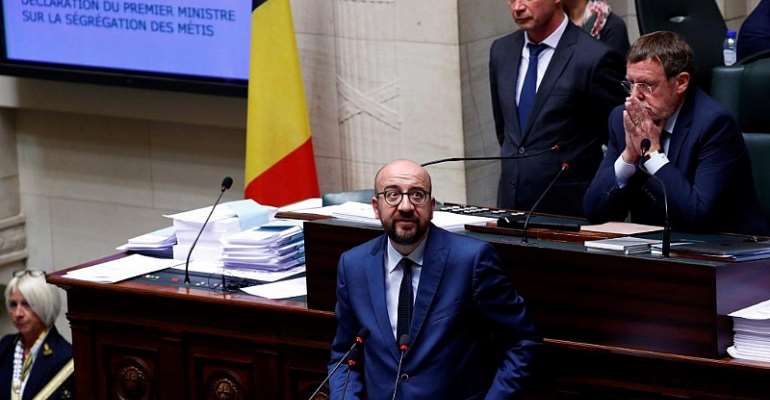 Belgium's Prime Minister Charles Michel has formally apologized for the country's role in kidnapping mixed-race children from the Democratic Republic of Congo, Rwanda and Burundi between 1959 and 1962.

“On behalf of the federal government, I apologize to the mixed race people with roots in Belgian colonization and to their families for the injustice and suffering they went through. I also wish to express all our compassion for the African mothers whose children were torn away from them” said the PM at the Belgian Parliament Thursday evening.

The kidnapping of mixed-race children in the former colonies started around turn of the 20th century.

Often this female would be the young daughter of the chief. These 'companions' led to many of 'illegal' mixed relations.

Other times, the Belgians had a female companion as part of their entourage who travelled with them. In other situations, the women were simply raped.

“These children posed a problem. To minimize the problem they kidnapped these children starting at the age of two and placed them in boarding schools that were cut off from both the European and African world. So a kind of cocoon to ensure they had relations with noone” says Francois Milliex, the director of the Belgian Association of Metis, who was brought to Belgium under the same policy.

He adds that the Belgians feared that once these children became of age they might try to incite revolt as had been the case in Canada in the Red River Rebellion of 1869-1870.

The also feared that they would demand certain privileges from the Belgian government as Europeans.

"The presence of these metis children in the villages was also seen as a blow to the white race and so they decided to keep these children away from the looks of the natives” explains Budagwa.

In some cases, the children were hidden and raised amongst family, adds Milliex.

Once they came of age, they were married off to another metis explains Budagwa.

To Belgium they go

When the colonies staring seeking independence, the Save convent in Rwanda - Save was one of the first Catholic missions in Rwanda - was worried about the welfare of the children after independence.

“The Belgian government and the missionaries believed that these children would be subjected to major problems by the local population if they stayed on in these independent countries. And so they brought some 1000 children….to be adopted, raised in boarding schools or to live amongst foster families” in Belgium explains Milliex.

Many of the mothers were contacted and forced to sign a letter allowing their child to be taken to Belgium.

Many of those who refused, Budagwa says, were threatened with having to pay the school fees for their child. In other cases, the mothers weren't contacted at all.

One man's personal journey to Belgium

Milliex says he was brought over to Belgium at the age of 15 from Rwanda.

“We were seven brothers and sisters. And authorities told my father, who was a Belgian colonial and plantation owner that the metis children had to be evacuated.”

Upon arrival, the older three brothers were separated from the other siblings who were split up and put into a foster home.

He and his brothers were old enough to fend for themselves, so they wrote letters to authorities asking to be placed into a more appropriate home.

Eventually they were moved and even managed to bring over their Rwandan mother.

His case is exceptional.

Initially all metis children were granted Belgian nationality, but this was later revoked.

That meant Milliex and others like him of metis race were forced to engage with the authorities to buy back their nationalit. Others remained stateless

Assumani Budagwa, originally from Belgian Congo, only came to learn about this chapter in Belgium's history through his cousin.

Her two metis children were forcibly taken from her in 1959, even though she was married to a European man.

But under Belgian rules, mixed marriages were not recognized.

“When the girls were of a certain age, a nun came by and asked if she would accept to put her daughters in a boarding school in Ruanda [Rwanda]” even though they were in eastern Congo," Budagwa says.

“Many months later, the same nun came back to visit my cousin with her youngest to say that 'at the orphanage a white woman came by and wanted to adopt your daughter.

His cousin refused the adoption.

But the girl was taken away in a car and she never saw her daughter again.

She immediately went to Rwanda to get her other daughter, but upon arrival she learned that the nuns had already organized the departure of all children to Belgium.

Over the years she tried to contact her daughters or find their whereabouts but to no avail.

It wasn't until years later in 1986 when Budagwa decided to try and find his young cousins.

In doing so he uncovered this chapter in Belgian's history and found his cousins. One was living in Germany and the other in Belgium.

Apology: too little too late?

The apology is a bit late, but at least it's happening says Milliex.

“This topic of metis is one that others have dealt with in other colonies”, as was the case by the French and the Portuguese," Budagwa says.

“This topic was taboo for a very long time. As Metis ourselves, we didn't talk about it together. Instead we did our best to create our lives in Belgium without causing much stir. But it's only after we began to have a family of our own that our children started asking us the questions, who is your mother? Who is your dad? Where are they from? But most people didn't have an answer" says Milliex.

He adds that when they began soliciting help from the parliamentarians to seek concrete measures from the government “three-fourths of the deputies had never even heard about this”.

In 2017 the Catholic Church appologized for its role in the kidnapping and segregation of the metis children and from banning mixed-race marriage.

The apology is the first time that Belgium took any responsibility for atrocities committed during its colonial rule of over 80 years.

The government says it will provide assistance to those who need it and ultimately open up the archives to everyone so they can have a way of tracing their family lineage.