Ghana Natural Resource; Is It A Curse Or A Blessing?

Analysis on whether or not the resource curse syndrome is real in Ghana.
By Issah Musah Aziba 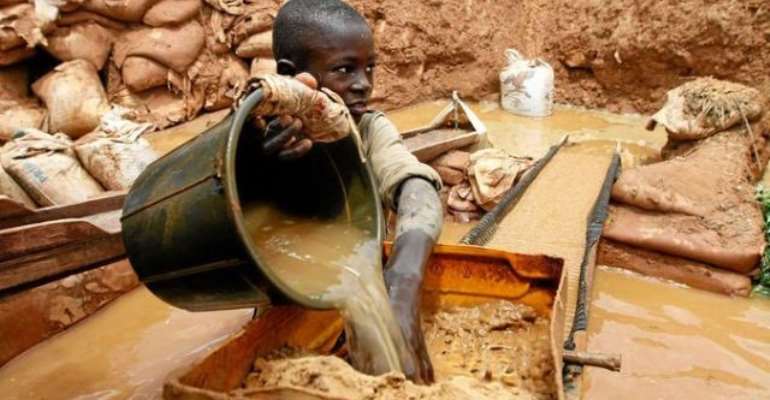 Nature has not distributed her resources equally as some countries are naturally endowed with resources whereas others are not. Most countries in Africa are blessed with lots of resources such as gold, diamond, crude oil, vast lands inter alia. Examples of such countries include; South Africa, Ghana, DR. Congo, Nigeria, Angola, Rwanda etc. Generally, all these resources are needed to bring about development and as a result, every country with or without resources need them to develop.

Ghana despite having lots of natural resources, there have been several questions as to why all these resources have not turned the country into a paradise but have made the country worse off than before. Should we conclude that resources in Ghana are a curse? What is the reason for our inability to develop? Who is to be blamed for our deficiencies?

It is therefore creditable that, nature’s gift of resources is not necessarily the problem, but the management of these resources and the political settings in which the resources are managed are the key elements for our success or failure in turning these resources either from a curse to a blessing or vice versa. Therefore, the mere having of these resources does not mean development will automatically take place as in the case of Ghana.

Development will be sluggish if these resources are not put into effective and efficient use by our leaders. It is therefore not uncommon to see a country with abundant resources but its people flounder in abject poverty which is very clear in our Ghanaian setting. We have the Oil and the non-Oil yet the citizens still live below the poverty line. On the contrary however, some countries including Japan and Malaysia do not have such resources but are rich when it comes to development. This has generated a lot of debate amongst students, academics and development experts as to whether having resources are a curse or a blessing.

Evidence in some countries across Africa show that having resources is a curse. For instance, most people in Yenagoa-a village in Nigeria’s oil rich Delta region live in mud huts. They reside only a few feet away from the oil wells. But they lack electricity and in-door toilets. They have no hospitals, no running water and no schools and unemployment rate is too high. Also, the oil spills in such mining fields often cause havoc to farmlands and properties rendering the people not only homeless but prone to diseases. Can Ghana learn from this incident? These are several countries who have succeeded in turning their resource into a blessing and such countries includes; Norway, Botswana etc. so Ghana can still adopt their ways, it is not too late!!

In addition, the Democratic Republic of Congo is one of the richest countries in the world. Experts have estimated that the Congo basin alone can produce enough food crops to satisfy the requirements of nearly half the population of the whole world. This potential wealth however, contrasts sharply with the extreme poverty of the people of this country. According to some statistics, an average Congolese earns an annual income of less than US$100. State revenue represents less than US$ 1billion for a country whose population is about 60 million with a land area of 2, 243,000 square kilometers. From this, it is clear that the natural resources of this country benefit neither the state nor the local communities. On the contrary, they seem even to become a sort of curse because of the repeated war situations they engender and the political and economic instability they create for this country. The leaders are looting and stealing the proceeds into private pockets and no long care about the ordinary citizen.

We have to know that, when a country has a lot of resource and the institutions are very weak, we should not expect any significant development. In Ghana we had hopes that since our country is a democracy, our foundation was very strong; thus, we have strong media who would criticize and keep government on its toes, we equally have civil societies who will check government and make it accountable and transparent yet, the situation has not yielded any result. We realized that, Good Governance + Resource Extraction = Poverty reduction and hence development, But Bad Governance + Resource Extraction = Poverty Increment and hence underdevelopment

However, Ghana’s situation is not so different. The production of cocoa has given way to mineral production and the regular blasting activities of Newmont Ahafo have resulted in cracks in a number of houses at Dormaa in Kenyasi No. 2 and Habitat in Kenyasi No. 1. It is now difficult for students to acquire scholarships from the Ghana Cocoa Marketing Board (GCMB) since the cocoa farms which were evidence to acquire scholarships are no more as the land is now being used for mining activities. This has given rise to poverty in the area.

Further, the story of other African countries is not too different from those mentioned above. That is the more reason why the recent discovery of oil in Ghana does not excite some people. Others have made it clear that, if the discovery of oil in Ghana will become a curse on the people then, it should be allowed to stay on the ground. The citizens are so mad with all these, because people from other countries might think Ghanaians are blessed yet internally, we are suffering amidst lots of resources.

Corruption is one of the diseases that turns a country’s resources from a blessing into a curse and several attempts made by Ghanaian leaders to arrest it has proved futile. The Special Prosecutor was established by law to fight corruption yet it is still worse off than before. About $13.5 million is confirmed missing under the NPP administration yet the claimed to have been better managers of the country than others. Where would our leaders who are good turn to be equally bad. It is indeed very clear that, resource to Ghana is a curse and God should take it back and leave us so that we know we do not have any. Because we can have yet still struggling to be like others.

Even President Obama in his address to the Parliament of Ghana said, “the African continent is rich in natural resources and that there is an unstinted wind and solar power; geothermal energy and bio-fuels. From the Rift valley to the North African deserts; from the Western coasts to South Africa’s Crops-Africa’s boundless gifts can generate its own power, while exporting profitable, clean energy abroad”. He told Ghanaians in particular about the fact that oil brings great opportunities, and that, Ghanaians have been responsible in preparing for a new revenue but that, oil simply cannot become the new cocoa. This is because, “dependence on commodities-or a single export has a tendency to concentrate wealth in the hands of the few, and leaves people too vulnerable to downturns”.

Why is it that some countries like Japan and Malaysia have few natural resources but are highly developed? Why is the United States of America rich in resources and highly developed? African countries have the resources yet very poor when it comes to development, why? Japan for instance is one of the seven (7) most industrialized nations of the world even though it is a mountainous country with only 16% of the land cultivable.

In my view, education is the secret of the developed world. Without education, no matter the resources of a country, its people will remain backward till the end of time. It is therefore imperative for our leaders to invest in the education of our children. In most African countries, our educational systems are not only confused but do not equip us for industry. In Ghana in particular, our politicians keep on reforming our educational system year after year but end up sending their children to the best schools in the West.

Development according to President Obama depends on good governance and that is the ingredient that has been missing in Ghana and Africa for many years. “Each nation gives life to democracy in its own way, and in line with its own tradition. Governments that respect the will of their own people, are more prosperous and successful than those that do not…. No country is going to create wealth if its leaders exploit the economy to enrich themselves-or if the police can be bought off by drug traffickers-No person wants to live in a society where the rule of law gives way to the rule of brutality and bribery. That is not democracy that is tyranny”.

Now that it is evident that our resources are not yielding us any significant development, we must begin to fight for our own livelihood. We cannot do that alone and hence, we must fight and strive together or collectively. We must pressure the leaders whom we have entrusted them with power to take serious charge in the management of our resource and be accountable to us.

I stand for the interest of the people and together, we shall fight for the change that we want.