Anti-Apartheid Activists Laid To Rest In Peace, 50 Years On 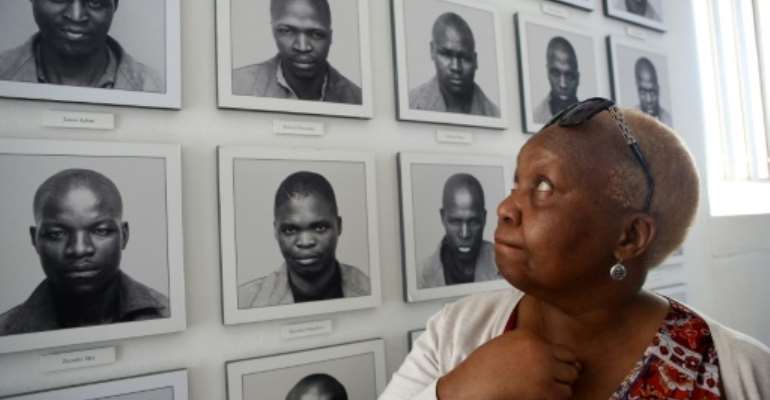 Pulane Koboekae looked pensively at the seven nooses suspended over a trap door in Pretoria Central Prison where her brother Richard Motsoahae was hanged by South Africa's apartheid regime in 1964.

Then she pulled out a white tissue and sobbed silently.

"We've long been waiting for this," she said, on the day in August last year when her brother's remains were finally disinterred, 54 years after he was buried unceremoniously in an unmarked grave.

Motsoahae was an activist for the Pan Africanist Congress, an anti-apartheid movement which split from the African National Congress (ANC) in pursuit of a more radically "Africanist" agenda.

Motsoahae and three others -- the so-called Krugersdorp Four -- were hanged for killing a policeman -- among 135 political prisoners executed by the whites-only apartheid government that ended with the country's first democratic elections 25 years ago this month. 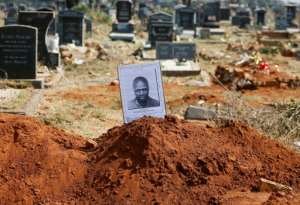 Richard Motsoahae was one of four members of the Pan Africanist Congress (PAC) executed by the apartheid regime for their role in killing a policeman. By Phill Magakoe (AFP/File)

Those executed at the gallows were hastily buried, often anonymously, sometimes in mass graves.

Koboekae remembers the day of the execution of her 23-year-old brother "like it was yesterday". She was just 13.

"I was left alone at home and I was not allowed to come and visit" him in prison, she said softly. "I was sent to school and when I came back, I was all alone."

Next-of-kin such as Koboekae are finally getting a degree of closure decades later thanks to the Gallows Exhumation Programme, created to find the remains of hanged activists and return them to their families for burial.

The project is a spin-off of the Truth and Reconciliation Commission, set up by the post-apartheid, ANC-led government to probe atrocities committed by the whites-only state.

The bodies of about 50 executed activists have been found and reburied so far. 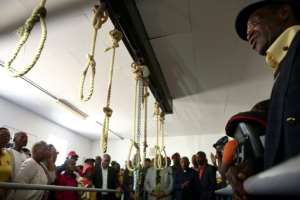 Families of anti-apartheid activists hanged at Pretoria Central Prison can visit the gallows as part of a grieving process that involves their loved ones' remains being located, disinterred, and handed over for reburial. By Phill Magakoe (AFP/File)

Under the exhumation programme, bereaved families are invited on a visit of the prison and the gallows as part of the coming to terms with their loss.

Recently, relatives of seven hanged prisoners went to Pretoria Central Prison -- since renamed the Kgosi Mampuru II Correctional Centre -- which was the headquarters of capital punishment in apartheid South Africa.

Guide Abram Rahlogo detailed the last walk of a prisoner, hands cuffed behind his back, from the cell to the gallows, passing the chapel on the way.

One of the visitors, 59-year-old Lazarus Molatlhegi, had pictures taken of him touching the nooses.

"I know those ropes aren't the ones that they used. But it's a rope exactly like that one that killed my brother. I was five at the time," he said.

Molatlhegi's brother Thomas, 31, was one of the Krugersdorp Four.

After the emotional hour-long visit to the prison and gallows which included them walking past the coffins that will receive their loved ones' remains, the families set off for the cemetery of Mamelodi, a township of Pretoria where black prisoners were buried.

The graves of seven men lay exposed, freshly dug up, the soil carefully dusted from the bones.

Koboekae leaned over the grave to look at her brother's skeleton, of which only the leg bones remained intact.

"It's a strange feeling. I never thought I would see my brother's skeleton one day... It's a bit unreal. It's the kind of things you see on TV, things that happen to other people", she said.

The bereaved were offered special counselling before coming face to face with the mortal remains.

"The decomposition process... we tell them how it works," a member of the pathology team that carries out the exhumations told AFP on condition of anonymity.

"Some are worried or scared when they see the broken bones... They are afraid that their loved ones were tortured," the expert said. 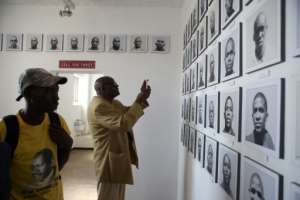 In South Africa, 135 political prisoners were executed by the whites-only apartheid government that ended with the country's first democratic elections 25 years ago this month. By Phill Magakoe (AFP/File)

In this case, there had been no torture.

"We know when the bones are broken before death. This is post-mortem. They (loved ones) are very interested in the explanations. It helps them. It's part of the closure," said the pathologist.

For Peggy Seloro, 77, the experience was nevertheless overwhelming.

She struggled to breathe, appeared close to fainting, and had to be supported and calmed by family members.

Her brother Petrus Ntshole was just 22 years old when he was executed -- another member of the Krugersdorp Four.

Koboekae left the cemetery stoically, bracing for what would be a wait of several months for her brother's remains to be released to the family for burial.

On her way out, she passed a small pyramid-shaped monument on which her brother's name is engraved. 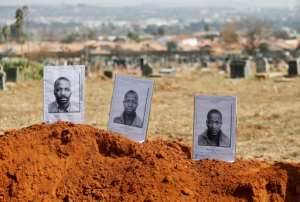 "I am proud of him. They were fighting for liberation," she said.

"I could not assist with his first burial, but at least I will be able to attend his second. He will be buried with his family. That's important for us.

"It is going to close a chapter -- this is closure."

Last month, Justice Minister Michael Masutha handed over Motsoahae's remains to his family, as well as those of eight other executed activists.

"We hope the families of these activists who were hanged in the apartheid gallows will now find peace and closure," said Masutha.