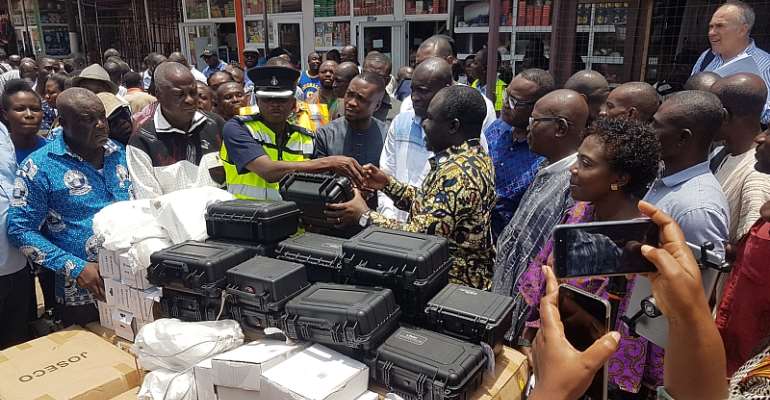 Ministry of Transport in collaboration with National Road Safety Commission (NRSC) has donated some items to the Motor Traffic and Transport Department (MTTD) of the Police service to help them tackle road accidents in the country.

According to the minister of transport, Hon. Kwaku Ofori Asiamah, All commercial and goods carrying vehicles with a gross weight of 3.5 tonnes and above are to be fitted with speed limiters as part of mechanisms to reduce growing road crashes in the country.

The move, he said, was in line with Regulation 135 of L.I 2180 (Road Traffic Regulation, 2012) which mandates all such vehicles to have speed limiters.

Speaking at a meeting with road transport operators in Accra last week, he disclosed that, the Ministry would issue directives on the installation of the speed limiters.

The meeting comes on the back of two fatal accidents on the Techiman-Kintampo and Winneba- Cape Coast highways last week which claimed more than 80 lives and injured several others.

Following the fitting of the speed limiters, the Minister stated that the Motor Traffic and Transport Department (MTTD) of the Ghana Police Service would routinely stop vehicles to check for compliances.

Adding that, all commercial vehicles which run intercity journeys were expected to have two drivers to avoid the situation where a single driver drives more than eight hours without observing the mandatory 30 minutes rest period after every four hours.

“Driving is a difficult task and that’s why the Regulation 118 makes provision for intercity journey drivers to have a mandatory 30 minutes rest after four hours of driving. This is to allow the driver some time to rest and refresh. Investigations in recent accidents revealed that the drivers were sleeping while driving. We do not want this to happen again so we are urging all transport operators to have at least two drivers’ onboard intercity journeys to allow for continuous journeys,” Mr. Asiamah added.

Furthermore, all transport terminals across the country; he said must have safety officers, who have gone through training from the National Road Safety Commission (NRSC), to conduct pre-departure checks on vehicles before leaving the terminals.

He urged Commercial drivers, to undergo refresher training prior to renewing or upgrading their licenses adding that currently the West African Transport Academy has been established to train drivers and mechanics mainly for the heavy-duty automobile industry.