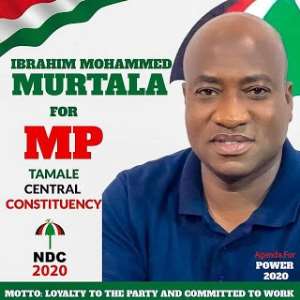 The well-established member of the National Democratic Congress (NDC) made the formal confirmation on radio gold news analysis programme - Alhaji and Alhaji over the weekend.

His comments come at a time when nominations are not yet to be opened for the parliamentary primaries of the main opposition party following Hon. Alhaji Inusah Fuseini announcing that he will not seek re-election in 2020.

It is based on the fact that other aspirants have started jostling and lacing their boots ahead of the official opening of nominations.

It is unclear how many people have declared their intention to contest the Tamale Central Constituency primaries, but so far Comrade Murtala is likely to battle it out with the immediate past Metropolitan Chief Executive, Honorable Abdul Hanan Gundaadoo who is seen as a serious contender.

The decision not to contest has opened doors for prospective candidates of which Hon Murtala Ibrahim is taking advantage of.

The Tamale Central Constituency was one of the new constituency that was created in 2004 and its first MP was Professor Wayo Seini.

Following his decision to cross carpet to the NPP a bye-election was held in 2006 of which Hon Inusah Fuseini won and have since represented the good people of Tamale Central till date and have now decided to bow out of active politics.

THE DECISION TO CONTEST

Many were those who thought that comrade Murtala will still keep an eye on the Nanton Constituency seat following the monumental developmental projects he has undertaken when he was MP of which they have described as work in progress and that many of such projects have stalled following his defeat in the last elections.

Political pundits in the constituency have argued that Murtala Ibrahim is not a stranger in Tamale central constituency. In fact, Hon Murtala Ibrahim has ever contested the parliamentary primaries with the incumbent member of parliament-Hon Inusah Fuseini on two occasions in the year 2006 and 2008 but was unsuccessful, so his decision to come back and contest is in the right direction.

If there is one politician in the northern Region who have gone through the mill and have garner enough experience then it is Murtala Ibrahim. As the longest serving student leader, he contests the parliamentary primaries in the Tamale constituency in 2006 and 2008 respectively.

When the NDC assumed power in 2009, he contested the MCE position with Alhaji Friday. He was then appointed the deputy national coordinator of the National Youth Employment Programme (NYEP). A position he held until he was elected Member of Parliament for the Nanton Constituency in 2012.

Comrade Murtala as he is preferred to be called was appointed deputy minister of information and later deputy minister of trade and industry, a position he held till the NDC lost power in the 2016 elections of which he also lost the Nanton seat to the NPP candidate. So the expression of interest to contest the Tamale central constituency is seen as a home match.