Why The Establishment Of A Special Prosecutor In Ghana Is Needless 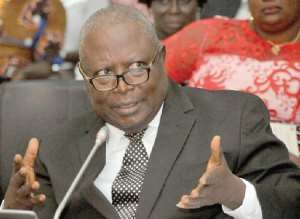 Let us remain ourselves with who a Special Prosecutor is, the Special Prosecutor is a lawyer appointed to investigate and potentially prosecute a particular case of suspected wrongdoing for which a conflict of interest exists for the usual prosecuting authority and other jurisdictions have similar systems. For example, the investigation of an allegation against a sitting president or attorney-general might be handled by a special prosecutor rather than by an ordinary prosecutor who would otherwise be in the position of investigating their own superior. In some countries, the decision to appoint a special prosecutor rests on the attorney general or the president.

However, in the case of Ghana, President Nana Addo Dankwa Akufo-Addo assured Ghanaians that his government would surely create the office of the Special Prosecutor which he did despite stiff oppositions. The New Patriotic Party in its 2016 manifesto promised to set up such a controversial office to fight corruption in the country. This office, independent of the Executive, aim is to investigate and prosecute certain categories of cases and allegations of corruption and other criminal wrongdoings such as the alleged violations of the Public Procurement Act and cases implicating political officeholders and politicians.

It is no doubt that democracy has granted the government the power to create or establish institutions to speed up the voluminous work of government but it doesn’t permit it to just create them because it wants to provide employment to people or does it permit it to create them and not make them work as intended.

The office bill was tended to parliament and after critical deliberation, it was passed into law and the vetting of the Special Prosecutor was done smoothly. With the enthusiasm at which the special prosecutor came into office, We Ghanaians consider ourselves liberated of all corrupt practice in the country and would be better off than Nigeria and other African countries. We had strong expectations and hopes that at least all the earnings from our abundant natural resource would be put to proper use towards the development of the country, thus we would not fall prey to the resource curse syndrome. Well-cultured and discipline Ghanaians thought with the purpose of the office, every citizen will benefit equally from all the good things in the country and people who are warmhearted of such selfish act would be put behind bus. We are all aware that, corruption is a disease that affects effective and efficient government hence, Bad governance + Extraction of Resources= Resource Curse.

We have come to realized that, all the expectations Ghanaians had on the office is meaningless because the swiftness at which the special prosecutor answered the vetting questions points out that he was just confused and happy because he is the first person to occupy the office. He has forgotten that there were several institutions that were already in existence fighting the same purpose. He forgot that it was the state that would finance the institution, not his personal monies. He doesn’t know what goes into investigation and thought the work was so easy to start with. It is my opinion that this office is a needless office. The attempt to distinguish types of corruption offences that could be investigated and prosecuted by the Special Prosecutor sends a clear message to Ghanaians that the President and his Government now accept that certain types of corrupt offences are not serious for prosecution or at least to be prosecuted by the Special Prosecutor.

Also, the CHRAJ has the legal powers to investigate issues of human rights abuse and even the president and other bodies who violet human rights through ways of corruption can be amicably handled by the CHRAJ. This Human Rights office should have been re-defined and improved to that level instead of creating a different office to complicate their functions….thus the purpose for which the office was created has been forfeited and Ghanaians are in absolute doubt as to why despite the several allegations of corruption in the country recently, the special prosecutor and his team have done nothing about it and it took the former president, J.J. Rawlings to question the effectiveness of the office: For about two years now since its inception, it has not prosecuted even an ant talk-less of a human. The special prosecutor did not feel the shame that he and his team are not able to prosecute anyone yet in his response to the president's statement, he claimed that, "I am very effective and working in the quiet". Really!! Working in the quite? The office is backed by the constitution and whatever actions taken in its label need not be hidden from the public. We want to see your mode of operations since you are against the methods adopted by the Tiger Eye.

The office in its useless state and under its watch, have seen several corrupt allegations in Ghana but have remained unobtrusive about them. Good instances are seen in the heinous corruption exposures within the Ghana Football Association (GFA) and the Mining sector which no prosecution was made. Meanwhile, these exposures were through an ordinary journalist’s effort who risked his life in the course yet his method being questioned whereas you whom we have entrusted power and authority to fight corruption for the country has been so dormant. I strongly think the money that is used in financing the creation and activities of the Special prosecutor’s office should have been used to finance Anas Arimiyaw Anas to do his work. In Ghana we just focused on unnecessary things. This office cannot deliver anything and so long as bad leadership is concerned, corruption would always be among us. I thought creating the office would help speed up the fight but my thoughts were proven wrong, we only pay fat and huge salaries to enrich the elites but at the end, corruption is still worse off than before.

The government should consider revisiting his decision with the creation of the office, or could it be that the office has no logistic or capital to start their work? And if we don't have resource to fund their activities, why create the office and live it inactive? Obama once said "government should create more institution but should at the same time make sure those institutions function effectively"…. however it is evident that our special prosecutor's office is needless one.

I stand for the interest of the citizens and together we shall fight corruption. Corruption is a mental activity and needs to be taken with drastic measures.