Where Is God When Tragedy Occurs? A Personal Reflection On The Crash Of The Ethiopian Airlines 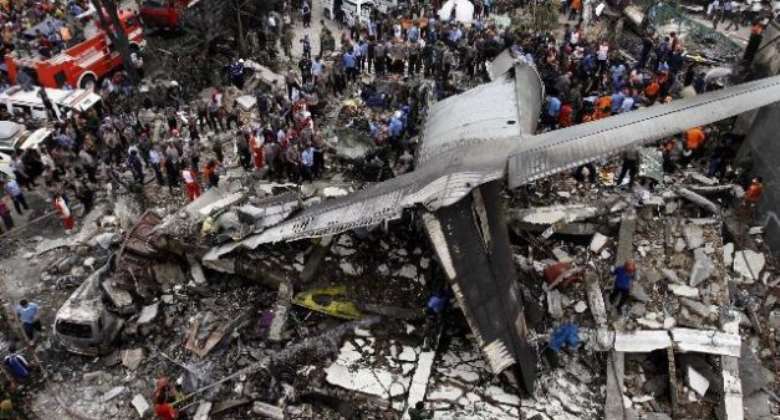 As a second-year student reading a branch of philosophy called Logic at the University of Cape Coast, one of the statements we had to analyze was the trilemma formulation of the Greek philosopher, Epicurus, which was succinctly summarized by David Hume as, "If God is unable to prevent evil, then he is not all-powerful.

If God is not willing to prevent evil, then he is not all-good." The formulation was ostensibly structured to refute the existence of a personal God, who is omnipotent (all powerful) and omnibenevolent (all kind). David Hume, a Scottish enlightenment philosopher, whose ideas contradicted the existence of a personal God, bracketed the world from any supernatural control.

For both Epicurus and David Hume, the existential reality of evil negated the existence of a god who has control over the universe. For many centuries, many thinkers have struggled to reconcile the existence of a loving and good god and evil. Evil and good are two opposites that cannot exist simultaneously. The presence of one connotes the absence of the other. As rational and meaning-seeking beings, human beings have spilled ink to explicate the riddle of the mutual existence of evil and good. Religious and irreligious, theists and atheists have all attempted to unravel the enigma of good and evil.

For atheist philosophers and evolutionists, the fact that there is no intelligent creator of the universe and its content is equivalent to a purposeless world. Life is without a purpose since chance is the origin of the material world. Again, the world is simply what we see and feel: anything short of that has no existence. The mundane world is all there is to know. How do atheist philosophers and evolutionists explain evil? For these thinkers, evil is one of the natural outcomes of evolutionary processes. It is simply an accident. Death, for instance, is considered as part of the natural flow of life. The idea of a purposeless of life supports racism since racism is part of the mechanism of the survival of the fittest.

While religious people do have a credible argument, it is still difficult to provide a convincing answer to the existence of (natural) evil. In moments like the Ethiopian airlines that crashed near the town of Bishoftu, southeast of Addis Ababa, killing 157 people on board shortly after takeoff, March 10, 2019, we are brought face to face with a quest to explore the charted question of: 'where is God when tragedy occurs?'

Different religions have attempted answers to the existential reality of evil. In Hinduism and Buddhism, evil is as a result of crass ignorance. Plato supported this assertion when he observed that: “Ignorance, the root and stem of all evil.” The solution, therefore, is knowledge (self-consciousness). For devotees of indigenous religions in Africa, evil is caused by the existence of malevolent spirits. In Zoroastrianism, one of the ancient religions of Persia, there are two opposing gods: Ahura Mazda and Angra Mainyu. Ahura Mazda is responsible for good, while Angra Mainyu is responsible for evil. In polytheistic or dualistic religions, it is easy to use other deities as scapegoats for the existence of evil. But in a monotheistic religion like Christianity the a priori assumption of the existence of only one sovereign God, makes it difficult to easily explain away evil and its attending theological and practical challenges.

Christians, however, have a theological presupposition that ascribes functionality to an evil. For Christians, evil has a didactic value. Clive Staples Lewis neatly captured this in his book, The Problem of Pain,' as follows:

“We can ignore even pleasure. But pain insists upon being attended to. God whispers to us in our pleasures, speaks in our conscience, but shouts in our pains: it is his megaphone to rouse a deaf world.”

These sagacious words of C.S. Lewis, notwithstanding, the issue of evil torment us on daily basis. Between 2014-2015, while in Uganda, I had three surgeries and subsequently lived in unbearable pain for more than a year. Pain has the power to cause us to drift away from God or draw closer to Him: either way, we have a choice. But the truth is that men and women have become believers and some 'believers' left the faith because of pain. Obviously, pain can basically be categorized into two: natural evil and man-made evil. The challenge of human beings has been to have answers to natural evil. For man-made evil, such as wars and terrorism, the surest response has been that human beings have neglected their responsibility towards the common good.

This conceptualization of evil as a consequence of human beings' negligence is expressed in the following perceptive sayings:

Throughout history, it has been the inaction of those who could have acted; the indifference of those who should have known better; the silence of the voice of justice when it mattered most; that has made it possible for evil to triumph (Haile Selassie).

Edmund Burke had earlier constructed the above statement as: “The only thing necessary for the triumph of evil is for good men to do nothing.”

Since we appear to have answers to man-made evil, what we are left to handle is how to answer natural evil. How do we get God off the hook when it is about natural evil? Certainly, while atheists (who disavow the existence of evil with their fickle imagination), ask this question, it is Christian theologians who have a convincing answer to natural evil. The teleological argument of St. Thomas Aquinas provides an important clue to responding to the question of natural evil. If God created a world that is invested with an order, because God is not the God of confusion (evil), then we must locate the existence of evil somewhere. More importantly, it maintains that the world is leading to a teleo – a purposeful end. Impliedly, Aquinas upheld the biblical view that 'all things – good and evil – work together for our good (Romans 8:28).' It also means that, while God is not the author of evil, He is in control of evil and uses evil to a purposeful end. The Bible is replete with instances where God used evil for His good. My personal life also has many such examples.

In conclusion, my hope as a Christian in the face of evil is that I have a high priest, Jesus Christ, who is able to sympathize with me when I face evil (Hebrews 4:15). Because He has a personal experience with pain (suffering from deicide), He is able to lead me through. In the same way, His Holy Spirit is there, inter alia, comfort me in moments of evil and pain. Consequently, while I may not have exhaustive answers to why natural evil happens, at least, I can be sure that my God is the sovereign ruler of the world. This is to the extent that in the face of evil, I can say with Job that, “Even if He slays me, yet will I trust Him”(Job 13:15).

My prayers and sympathies are with all the bereaved families, friends and the Ethiopian Airlines' company. May God comfort you in these difficult times.

Cheering up with John R. Clements' hymn:
In the land of endless day
Lies the city four-square;
It shall never pass away
And there is no night there
Refrain:
God shall wipe away all tears;
There's no death, no pain, nor fears;
And they count not time by years
For there is no night there!
Satyagraha
Charles Prempeh ([email protected])
African University College of Communications, Accra