Is it the English or the Cardinal points that we do not understand?
By Charles Addai 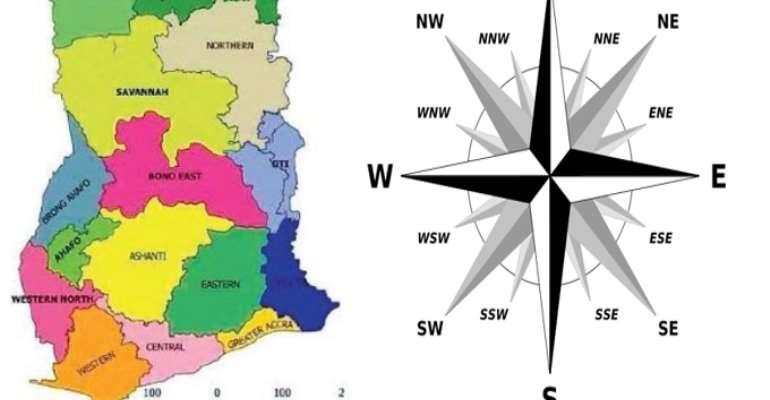 I thought Ghanaians understand the Queen’s English, perhaps I was wrong. Or is it the cardinal points that we do not know? We will find out. Most of the existing and the newly created regions of Ghana might have been named without reference to the geographical locations. When we divide the map of Ghana into two equal halves by an imaginary line, from the north to the south, the left side is west and the right side is east.

The cardinal directions primarily teach us North (N), South(S), East (E) and West (W), whereas the ordinal points give us North East (NE), North West (NW), South East (SE) and South West (SW). There could be further divisions like NNE as seen on the compass rose. We must consider the following arguments:

Greater Accra, Ashanti, Volta, Savannah, Brong Ahafo, Ahafo, North East and Oti may be alright. The rest are there to bring confusion for JHS and SHS students. Many people out there will find it difficult to understand the logic behind the naming of most of our regions. There must be some sort of consistency.

In future, we need to take into account all the arguments listed above when we are renaming the regions. Otherwise, one may think that we just fancy naming our regions in English than correctly understanding the English and also the geographical locations on the Ghana map.