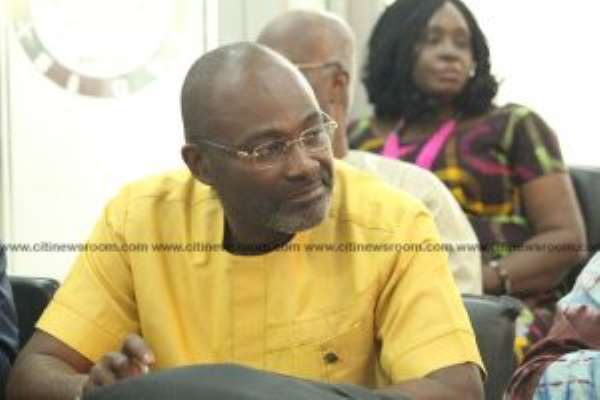 Parliament’s Privileges Committee has recommended the suspension or reprimand of the Member of Parliament for Assin Central, Mr.Kennedy Agyapong.

The Committee in its report following hearings on the conduct of Kennedy Agyapong in the heat of the airing of Anas Aremeyaw Anas’ Number12 documentary, found that vociferous MP of contempt and recommended that he be suspended from parliament for the rest of the session or be reprimanded.

The Privileges Committee in 2018 investigated Mr. Agyapong after he reportedly described Parliament as “useless,” and hurled insulted directly at the Majority leader, Osei Kyei Mensah-Bonsu.

Kennedy Agyapong subsequently described Muntaka Mubarak as dumb for referring him to Parliament's Privileges Committee over the purported insult.

The committee’s report said “the apology rendered by the Member and therefore did not consider expulsion as a sanction to the imposed… The Committee was however in favour of either a reprimand or a suspension after extensive deliberations, the Committee put the two options to vote.”

The report said there was a split ballot when a vote was cast as to whether the MP should be reprimanded or suspended.

“In view of the split ballot, the Committee recommends to the House to determine which of the two sanctions to be imposed on the Hon. Ken Ohene Agyapong.

The Assin Central MP has been referred to the Privileges committee again for allegedly inciting violence against an investigative journalist, Ahmed Suale during the heat of the Number 12 exposé which exposed deep corruption in Ghana football.

Ahmed was allegedly killed in broad daylight by two men on a motorbike, while he was leaving home late on January 16, 2019, at Madina, a suburb of Accra.

In this instance, Minority Chief Whip, Muntaka Mubarak, who was behind the previous invitation of his colleague to the Committee, called on the Speaker to refer the legislator to the Privileges Committee for comments made regarding the slain Tiger Eye investigator, Ahmed Suale, months before his death.