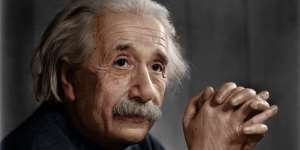 Theologians and scientists fiercely try to prove to each other that God exists or does not exist. What exists are scientific theories about the origin of our universe that follow each other in rapid succession and theologians who are forced to defend the image of God and the Bible.

And “God Himself,” He disappears laughing behind the horizon of our ever-expanding universe of which the “Light of the Beginning” will never reach us. Whatever else that is.

There is simply no well-founded model that describes the events to about 10 to -15 seconds. But there was no time according to the same scientists? Moreover, when it comes to physical phenomena, scientists have one big riddle, namely: “dark matter.”

Nobody can tell us what this dark matter is exactly. However, physicists think that dark matter constitutes no less than 85 percent of the universe.

In other words, we still do not understand anything about our world and the universe. Apparently, therefore, a new unified theory of quantum gravity is needed to break this barrier.

The well-known formula of Einstein's gravity theory simply can not explain why stars keep turning in their orbit. There is too little mass to describe the rotation of stars.

There go all previous theories that deny the existence of a 'Higher Power.' For it is precisely the understanding of these early phases in the history of the universe that is one of the greatest unsolved problems in physics and creates a duality between understanding and incomprehension.

Scientists who formulated the theory of 'big bang' assumed a static universe that has always been and always will be. But from the gravity law of Newton, it follows, however, that such a universe would collapse.

Newton recognized that problem and attempted to save his theory by stating that if the matter was evenly distributed in an infinite space, there would be no center where the matter would fall.

I wonder if we can call the theory of the center of our universe the “God particle,” the "Smiling Higgs Boson." Why not? We can replace this statement, like many others, later if it suits us better.

After all, then we do not have to acknowledge God, because the center of the universe constantly moves with the speed of light. But where to? The "Smiling Higgs Boson" and God who disappear in the beginning of Everything together with the center?

Thousands of years ago people assumed that the earth was flat. In our time it is assumed that the universe is flat. So apparently nothing has changed in our thinking about the flatness of things.

The question is how science looks at the multi-universe over thousands of years and whether our paradigmatic thinking makes future scientists laugh about what we had also laughed about the flatness of the earth.

No, God can not be grasped in words, calculations or theories and not even in colors or light. The only thing we can believe is believing in God or in theories if only to maintain duality.

Following Stephen Hawking and many scientists with him, there existed before the big bang "Nothing," no time, no matter and no space. But scientists also agree on one thing, namely; that "Nothing" was unstable and although there was no time, our universe came into a nano-second ...

Read More: Did Einstein Had Any Relationship With God?

The theory is based, among other things, on the perception of the constantly expanding universe, in particular, the redshift of the spectral lines and of light from distant galaxies, the Doppler effect.

But, how do we enter the light that will never reach us than quantify through an ever-expanding universe? Does God, or whatever science and theologians like to call it, become increasingly out of the picture? If so, then together we can only do one thing, namely; "To Believe."

There is a lot of uncertainty about the 'big bang'. Nobody knows whether the “big bang' actually happened, what happened next and how the 'big bang' came about. There are several theories about the origin of our universe, but current theories indicate that the big bang is the most likely one.

According to current measurements, our universe was created 13.7 billion years ago. The scientists have succeeded in reversing the 'cosmic film' to 2 seconds after the big bang, otherwise, they have not succeeded so far.

We hardly know anything about these first two seconds of the birth of our universe. Little is known about the cause. As long as we can not go all the way back to the very beginning, we are in the dark and we depend on theories that we have to believe, but believe in God?

Twice a few seconds, so we will have to go back together to time without time to solve God mystery so that we can play for that God who is devoured by science.

The standard response from astronomers that this question remains, “what was there before the Big Bang,” was not sensible? But that attitude changes.

In recent years, there are more and more theories that start from a time before the big bang, sometimes also with other universes. But yes the theories remain, and until that time they're out, so the only thing we can do is just continue to believe in God.

Joseph Yamin to clear weeds in all abandoned Mahama projects...
57 minutes ago