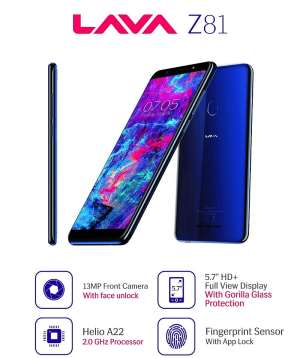 The Ghanaian mobile phone market has a new entrant.

After entering the African mobile market through Egypt, Lava, the fastest growing Indian mobile phone company has launched its operations in Ghana.

The company has promised to deliver valuable and reliable yet affordable mobile technology to the market and community.

“The vision of Lava is to make valuable technology accessible to people and empower them to do more and be more,” said Vikram Singh Parmar, CEO of Lava Africa. “In the last 9 years, we have traveled this journey of making this possible and today, we can promise the most trustworthy products and the most reliable user experience to our customers.”

Set to launch feature phones for the mass market through Champion Series (C1, A1, N1) and smartphones through Z series (Z81 2GB, Z81 3GB) & Iris 51, Lava is banking on price and quality as its competitive edge in the market.

Ghana today stands at a point where the economy will receive a positive boost from not only a mutually beneficial trade and intellectual exchange but also employment generation with the onset of operations of such technologically advanced global brands.

Unlike many manufacturers who outsource the production of their products, Lava has Research and Development Centers and manufacturing units based in India, that produces highly reliable products and services.

LAVA has also established a partnership with I2, who will be taking up distribution of the company’s phones. I2 are looking at using both online and offline channels to help LAVA to penetrate the market in Ghana against incumbents already in the market.

Indian companies have demonstrated their dominance in the field of technology in the last 2 decades and have evolved their ecosystem in a way that they are now positioned to deliver some of the most advanced and high quality technological products to the world.

Today, India is the second largest source of computer software in the world after the United States.

About 40 percent of the software used today in mobile phones are being developed in India.

India is the source of programmers and engineers that make up the largest companies in the US Silicon Valley, with more than 300,000 engineers and programmers that own 750 companies with some of the leading Software as well hardware companies having Indians being the CEO of businesses like Google, Microsoft, Adobe and Nokia.

The author has 1275 publications published on Modern Ghana.