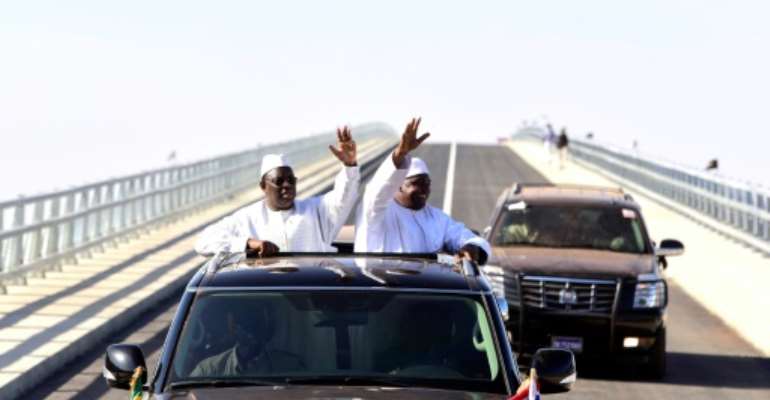 Senegal's president Macky Sall (L) and Gambian President Adama Barrow (R) wave as they inaugurate the Senegambia Bridge built to facilitate trade and travel in this part of West Africa. By SEYLLOU (AFP)

The presidents of Senegal and The Gambia on Monday inaugurated the Senegambia bridge to facilitate trade and travel in West Africa after decades of delays.

The bridge located on Gambian territory is an elegant work in light concrete more than a kilometre long. It crosses the River Gambia around 10 kilometres (six miles) from the border post of Farafenni where the two leaders met for the inauguration, standing together in an open limousine.

"Given the geography of The Gambia and Senegal with a river dividing both countries in two halves, I wonder why it took so much time to have this bridge," said Gambian leader Adama Barrow, head of the smallest country on mainland Africa which is nearly entirely surrounded by Senegal.

"We can be proud of having turned this dream of several generations into a reality," added Senegalese President Macky Sall. 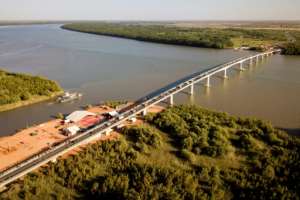 The bridge project dates from the 1970s but faced numerous delays due to the changing relations between Dakar and Banjul. Construction finally began in 2015.

It will enable those who want to travel from the north of Senegal to its southern region of Casamance -- whose development has been hampered by its geographic isolation from the rest of the country -- to avoid having to take a detour of some 400 kilometres.

Gambia's presidency said that "the bridge, which is part of the Trans-Gambia Road Corridor, is a vital economic and strategic link connecting the north and south banks of the Gambia River as well as The Gambia, Senegal and other countries in the sub-region."

"Easy movements of goods and faster delivery of services are now guaranteed round the clock," it added in a statement. Previously vehicles had to take a ferry to get across the river.

The toll bridge is now open for cars and starting in July to trucks and other heavy vehicles.