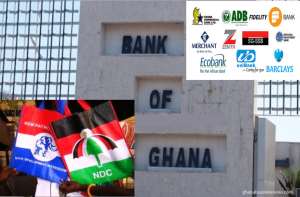 The Purpose of this article is to outline the debilitating issue of lack of corporate governance and regulatory supervision and enforcement within the banking sector in Ghana over the last decade (Between January 2009 to January 2019).

The main import is to get the timeline of issues in the banking sector, conduct table-top root cause analysis and to proffer solutions in enhancing a robust corporate governance and risk management regime.

The NDC Years January 2000
The first time I heard of the collapse of a bank in Ghana was that of 2 state banks in January 2000 When the erstwhile state banks, Bank for Housing and Construction and the Cooperative Bank Ghana collapsed following heavy losses[1]. Reasons assigned at the time for their demise was that the 3 state banks namely Ghana Commercial Bank, Bank for Housing and construction (BHC) and Ghana Cooperative Bank (C B) had loaned colossal amounts to a super market chain, to the tune of 120 billion cedis. The exchange rate at the time was $1- 4200 cedis.[2] ($28 -29 Million dollars).

According to Serious Fraud Office report at the time, there was collusion between the management of the 3 banks and that of the super market chain.[3] According to an article in modernghana.com,[4] most political watchers at there were allegations that some of the funds were used to fund political activities, and bulk of withdrawals were made during the run-up to the December 1996 elections.[5]

Someone may be asking, why is this writer going down memory lane? The answer to this question is simple. Over the years, There has been a lack of corporate governance and risk assessment in banks in Ghana. And the central bank seems to be at the mercy of the political Leadership.

The NDC Years January 2009 to December 2016
It should be instructive to note that most of the banking crises facing Ghana, had its offshoot during the period when a particular party was in power from 2010 to December 2016.

The issue of Bank collapse and lack of supervision has again reared its ugly head.

In 2017, The Bank of Ghana revoked the licenses of 2 banks namely: Capital Bank, UT Bank. The Ghana Commercial Bank did an asset purchase of these two banks and absorbed the deposits of these banks.

The Central banks report of these 2 banks, identified a string of Corporate governance lapse.

The rot, according to reports started right from the time these two banks were given their banking licenses. These two banks started of as micro finance companies; in the case of Capital Bank, it was granted provisional license in 2012, and full license in December 2013.

Capital adequacy and related party transactions were cited as leading to the collapse of UT and Capital Bank.

The board chairman, after the demise of the Bank, asserted that he could not be blamed since he was not part of the day-day management of the bank.

This to me is worrying, it seems the gatekeepers of our savings and hard earned cash are not even. Aware of their fiduciary duties as board chairmen. Some years prior, this same person had intimate that “banking was easy it was just debit and credit”. [8]

Further more, in the case of UT bank ( a listed company) it had certain duties and obligations.

It failed to adhere to its regulatory obligations. For years, had failed to file an audited Annual Report to the central bank and SEC. These infractions breached the banks listing obligations to the Ghana Stock Exchange, its shareholders as well as the Bank of Ghana's prudential and supervision regime.

Bad corporate governance was cited as a causative factor for the demise of UT Bank and Capital Bank in addition issues of capital adequacy. Management and board members were linked to a series of related party transaction in violation of Banking laws in Ghana.

There been reports and allegations that certain a companies and iindividuals with political connections were indebted to UT bank to the tune of GHC 302 million.

And these loans were advanced to the outfit without following the correct procedures. [9]

The NPP Years: A Legacy of cleaning -up NDC laxity.

The record books show that during the regime of J.A Kufuor from January 2001 to January 2009, Ghana did not experience any severe banking crisis, leading to the collapse of any bank.

There was talk of the state divesting itself from Ghana Commercial Bank (GCB) and at another point the same idea was mooted for Agricultural development bank. There were street protests in the case of ADB by civil society organisations. As of the date of this write up, these entities still remain majority state controlled.

Unibank incorporated in 1999, collapsed in 2018 and related party transactions., were cited again as a factor, leading to its demise. Shareholders and related parties had drawn an amount of GHC 5.3 Billion, which was about 75% of the banks total assets.[10]

Over 83% of UniBank loans were non-performing. Loan and advances to customers had been overstated , according to (https://thebftonline.com/2018/features/poor-corporate-governance-and-the-collapse-of-banks/).

In the case of Royal Bank, which started operations as a bank in 2012, it had always faced liquidity issues right from its inception. It had poor liquidity controls as well as liquidity risk management.

Sovereign bank was set up in January 2016 during the time of the NDC government, and the bank even failed to publish its annual report in December 2017. During investigations by the Central bank, it was found out that it had governance and capital challenges.[11]

All these banks, it should be mentioned had their issues prior to the NPP government in January 2017. And collapsed during the NPP regimes house cleaning exercise. So, the bulk of the blame should be levelled against the NDC regimes lack of oversight and enforcement.

Together with Unibank, their license was revoked by the Bank of Ghana and a new bank was set up in its place in 2018, known as Consolidated Bank.

Beige bank was December 2017, subsequent investigation, brought to light issues of fraud. The bank according to the Bank of Ghana, had violated regulatory provisions by using funds lodged with an affiliate company as part of its seed capital.

Construction bank was given banking license in May 2017, and started operations in full swing in December 2017. During the winding down of Unibank, it came to light that most of the Paid-up capital of construction bank was loans it had contracted from National investment bank and Unibank which violated Act 930. And the central bank noted that about GHC 80 Million was inaccessible by the bank to aid in its operations.

In terms of management of the financial sector, the current NPP government has collapsed 2 banks established from the time when they took power in January 2017 namely Beige, Construction.

This is not to say that the NPP is above board in terms of banking supervision and enforcement.

With regards to Beige and Construction Bank, the question, is why they were granted Licenses in the first place.

The case of Heritage Bank is a developing issue, so it will be left out of this discussion for now. It was a solvent bank; its license has been revoked due to a suspicion of the source of funds for setting up the bank.

It should be noted that Menzgold started operations in 2014 and started off as Menzbank and was warned by the central bank to change its name. it changed to become Menzbanc and was warned again. And it became infamous as Menzgold.

From 2014 till 2017, this private company was taking Gold deposits, 'collectibles' and was paying monthly 'dividends' of 7-10%.

Private companies as per the laws of Ghana, are not entitled to receive deposits from the public. The registrar general should have shut this company down in 2014, when its activities became known.

The Bank of Ghana should also had alerted other state bodies like EOCO, and FIC to freeze the accounts of this company.

The same should be said of SEC, the y should have clamped down on the activities of this company as it was paying dividends and dealing in derivates. But nothing was done since its operations commenced in 2014.

Minerals commission had granted it license to purchase and export gold from small scale miners, yet reports shows that, it had only exported just about $3 Million worth of gold, according to Occupy Ghana.

It was not until September 2018, that it was advised by the SEC to stop taking in new customers, did this company begin to suffer setbacks. Newspaper reports now show that the main principal of Menzgold has just been arrested in Dubai, after having jumped bail. This is a developing story so not much will be said of it, as facts will change overtime

Even , as we speak, the attorney general and registrar general's department are yet to commence the process of liquidation of Menzgold.

CONCLUSION
The running theme in this piece is one of Non-payment of loans, political interference on the part of the NDC, related party transactions, Shareholder interference, Lack of oversight, poor corporate governance as well as Lack of banking and regulatory supervision.

Most of the Banking issues that have been identified, happened during the NDC years, and NPP are having to clean the mess.

However, NPP also are to blame for their inertia in arresting the Menzgold issue right from taking over power in January 2017.

In case of distressed banks, at least they have done a good job in preserving customer deposits in GCB and the newly set-up consolidated bank.

We should mention that, Most Ponzi schemes like Pyram in 1995 and Menzgold in 2014, started during NDC regimes. Also, DKM, God is love among others were licensed and regulated entities under Bank of Ghana, yet they also promised astronomical Interest and returns, and had to be closed.

In terms of governance and supervision of Ghana's banking system NPP are better than NDC, but only just.

With regards to this Menzgold issue, a former deputy minister of finance has laid the blame at the door step of the current leadership of the Bank of Ghana.

He alleges that the Bank of Ghana lacks f leadership and judgement in not curtailing and shutting down Menzgold.

Sadly this same person was a deputy minister of finance. And his ministry, actually supervised the “ clueless” Bank of Ghana, whom, he is blaming for the lapses in the Menzgold affair.

On the NPP side of things, they are still not sure, the issue whether issue of Menzgold and repayment of customers is a contractual issue, between the entity and its participants, or that it is an issue of inept regulation.

An official of the Central Bank was heard on the radio that her outfit is blameless regarding the Menzgold saga.

Central Bank and regulatory failures, are so serious that, the minister if finance, in an address to Ghana's parliament, even alluded to people working at the Central Bank, ministry of finance, members of Parliament and security agencies being participants to the Menzgold scheme.

I am of the opinion that there should be a public enquiry. And the public should be educated on the nuances of investments and financial crime.

Also this public enquiry will give the public and celebrities the chance to tell their story, on how they got themselves to forestall Future occurrences.

For Ghana to have a robust and compliant Banking sector, the principles of corporate governance and risk management should be enshrined into law. And directors and principals of entities which collapse (not just banks but Public bodies also) should be banned for life.

Furthermore, the directors and managers of Companies both public and private should be made to undergo authorization and certification before they commence operations, and they must be periodically re-certified.

A robust culture of enforcement should be the order of the day and there should be a political will to adhere to such.

Written by Kwadwo Kusi-Frimpong, 10 January 2018, a Financial crime, Governance and Regulatory Expert, who has extensive Experience working with banks and financial institutions in UK and Switzerland.

Dissertation - on financial crime, Prevention and Enforcement in UK in 2015.