Celebrating A Constitution Day Is A Positive Nationalistic Thought 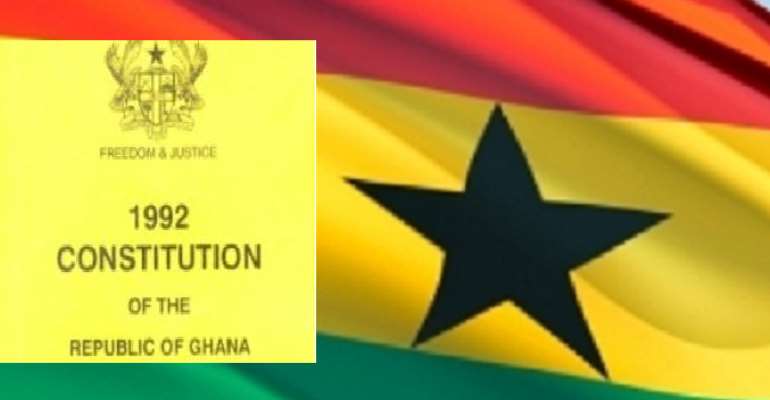 The Nationalism of a people is thus meaningless if they do not appreciate and commemorate the day in which the political and democratic jurisprudence of their nation was fully affirmed and upheld by all manner of persons, even the Khakistocrat, as in the case of Flt. Lt. J.J Rawlings and his uniform PNDC government. All nations including Ghana should appreciate the constitutional democratization of their societies, rededicating themselves to Rule of Law and creating a broader platform for reminiscing how far they have come through the practice of democracy and constitutionality. The setting aside of 7th January as a public holiday to commemorate the 1992 Constitution of the Republic of Ghana is therefore a right approach to perfect nationalism. However, the day should not be accounted as one of the other holidays of idling in mind. It is a very serious day in the life of Ghana and must be appreciated just as much.

The preliminary introduction of the Constitution of the Republic of Ghana acknowledges particularly the ideals of our citizenship and the items we so much uphold or would want to uphold with much esteem. Emphatically, we agree to establish;

1. a framework of government which shall secure for ourselves and posterity the blessings of liberty, equality of opportunity and prosperity.

2. a spirit of friendship and peace with all peoples of the world.

3. a solemn declaration and affirmation of our commitment to Freedom, Justice, Probity and Accountability.

4. the principle that all powers of government spring from the sovereign will of the people.

5. the principle of Universal Adult Suffrage and the Rule of Law and

6. the protection and preservation of Fundamental Human Rights and Freedoms, Unity and Stability for our Nation.

On account of this first commemorative day 7th January, 2019 and subsequent 7th Januaries, I would have wished that our fundamental message would be to put ourselves to questioning the extent at which we have achieved what we have together sworn by the name of the Almighty God; adopting, enacting and given to ourselves as a constitution. For instance; let us begin to question;

1. if our framework of government has truly secured or even tried to secure prosperity, equality of opportunity and the blessings of liberty for all citizens and posterity regardless party affiliation, ethnicity, age, et al. Or; do we still live in a state of theoretical constitutional democracy but a practical Oligarchy?

2. if the supposed Rule of Law is practicable and how in depth its practicality has brought justice to the "ordinary Ghanaian" who cannot afford to "pay for justice" as under covered by Ace Investigative Journalist Anas Aremeyaw Anas .

3. if there is at all any protection and preservation of the basic rights of the citizenry or do we still live in a society of Ochlocratic justice delivery where our security systems are much more deadly than falling in the undue hands of the mobocrat? Our prisons/cells are hell than correction centres. There are so many questions which need answers if we truly want to celebrate the nationalistic tendency of the constitution day.

The Ghanaian, on 7th January should basically be given a wholesome reason of the importance of our democracy and constitutionalism. The Ghanaian must be taught to understand that, " through democratization, Ghanaians now have the firm base to compare leadership styles across the board. This is important in the sense that a nation is often judged in the international terms by its style of leadership" - Kwame Boafo-Arthur. Undoubtedly, the style of leadership of a nation stems from the type, efficiency and effectiveness of its constitution. Ghana, thus, has the honor of international recognition especially in political structure and stability because we have had for ourselves a constitution which creates and fosters unity, and has peace, stability, transparency, accountability, respect for human rights and the rule of law as its enduring features. As Kwame Boafo-Arthur puts it, "not all needs have been satisfied by the liberal state but it cannot be disputed..." that the day on which Ghanaians provided for themselves the basic charter for the country's fourth attempt at republican government since independence should be and is worth celebrating.

Therefore, the celebration of a constitution day by all Ghanaian citizenry is a positive nationalistic thought which needs not a partisan political debate of proposition and opposition. The National Commission for Civic Education (NCCE) should act as much as possible to seeing to the proper education of the citizenry on the merit of 7th January in the political development of Ghana and why we must, devoid of political stance see reason to commemorate the day.

I planned my fake pregnancy with my mother, I used silicone ...
16 minutes ago