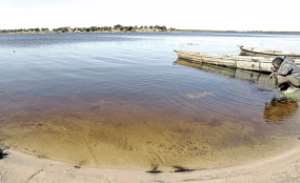 Nigeria’s daily {The Vanguard} reported hat the Nigerian government “on Sunday pledged to strengthen trans-boundary partnerships with Lake Chad Basin member countries to save the lake from extinction. Minister of Water Resources Mr. Suleiman Adamu made the pledge in Abuja. Adamu said that it was a matter for regret that the lake had depleted from its original size, saying its benefit for livelihood could not be over-emphasized.”

With some imprecision, the report identifies the Transaqua plan adopted at the Abuja International Conference on Lake Chad last February though not calling it by name. Adamu “said that Federal Government was partnering with the Chinese and Italian governments to carry out a feasibility study for inter-basin water transfer from the Ubangi River in Congo. “He said that the proposed water transfer would be one of the biggest water transfer in Africa, stretching over 2,400 km with the sole aim of recharging the lake for maximum benefits,” the newspaper wrote.

Adamu is quoted saying: “What it means is that if we don’t do something, one day we wake up and find out that the lake does not exist. It has happened in other parts of the world where lakes just dried up. We don’t want that to happen, so there was a consensus that the lake must be saved from extinction, because it provides livelihood for as many as 40 million people currently.

And that area has the highest population growth rate in the world, so in the next 30, 40 years, only God knows what the population would be; but we expect it to be high if the trend continues. Unless the lake dries up, in which case, people will now migrate, and you know what those migration[s] would be –there have [been] only two or three options: some would migrate up into the North into Europe, some would go eastwards, into the Central Africa region where it is already a conflict zone.

Saving that lake and sustaining the livelihood of the people in that region is key, and it is a security issue for us in so many ways, including part of efforts to stem the scourge of Boko Haram. The best way to save the lake is to do the inter-basin water transfer, so we achieve that, and that is the premise in which we are working.”

More Feature Article
ModernGhana Links
The Train Is Coming - Part 3
The Train is Coming - Part 2
Deborah's Lynching and the Hypocrisy of Humanity's Morality: A Sign of Deep-seated Hatred
Only Ghana's private sectors most innovative green entrepreneurs can get us out of the deep hole we are now in
Let Mahama go unopposed
Ghanaians Need an NDC Development Agenda, Not Sheer Bluster
Supreme Court Is Not Obligated to Hear Each and Every Case
Morbid Matters: Estimating COVID-19 Mortality
The Train Is Coming - Part 4
TOP STORIES

FDA, Police clamp down on tramadol abuse in Ahafo region
45 minutes ago

C/R: Man attacks girlfriend with machete; leaves her with cu...
52 minutes ago