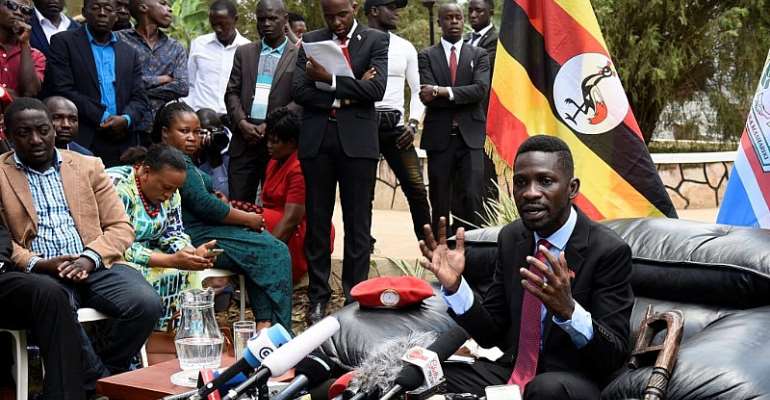 Uganda's Daily Monitor newspaper reports that security forces cordoned off the One Love Beach venue in the Kampala neighborhood of Busabala, where the popular popstar and lawmaker had been set to perform in the wee hours of the morning.

Political concerts
In an exclusive interview with RFI he denounces the brutal manner in which fans who had flocked to the Busabala beach to meet him, were treated. They beat up, teargased and dispersed the people he said, adding that some of his band members were arrested before police closed the beach to the public. Three of his people were still being held according to the lawmaker.

Robert Kyagulanyi dismisses claims by police that the concert was banned due his failure to get a permit arguing that he wrote to the police as required by the law more than a month earlier, not to seek a permit but so they would take the necessary measures to safeguard the event.

Parliamentary motion
The incident comes just a few days after Uganda's Parliament passed a motion declaring the blocking of Bobi Wine's musical shows unconstitutional and ordering the police to stop such actions. The musician and MP says the disruption of his activities is the clearest evidence that Uganda is a dictatorship where people are being ruled on the will of President Museveni.

In the interview Kyagulanyi recalls that one of his friends recently confronted Museveni about why Bobi Wine's music is being blocked. “The President told him that he will not allow me to perform, because my concerts are making me popular and making me a threat to his rule”, Kyagulanyi noted.

Court battles
The popstar/ politician says he filed an injunction with the courts last year to seek reparations for the losses he's incurred due to his blocked shows but the case has never been heard.

“They disrespect parliament and the constitution of this land”, Robert Kyagulanyi fumed.

The singer turned politician who was badly injured during his detention in August over the stoning of President Museveni's motorcade  allegedly by his supporters, says he is no longer a free man in his country.

“Today, every time I leave my house, I'm followed by the military”, he says. “I'm not allowed to go to a supermarket, attend a church function or even to wave to my supporters” Kyagulanyi complained.

The outspoken politician says he won't give up the struggle and will continue pursuing a legal remedy while seeking assistance from international human rights organizations.