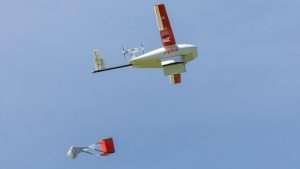 Parliament has passed the Services agreement between Flyzipline and government for the use of drone technology to supply emergency medical supplies especially to hard-to-reach areas.

The service agreement has been the subject of tussle in the house with the Minority describing it as a misplaced priority while government believes it is a step in the right direction.

This was after the House deferred the approval on two occasions due to disagreements by the minority side to allow for some regulatory checks to be completed.

Meanwhile the Minority has said even though the agreement has been passed, the group will not relent on its fight against the agreement.

Minority Spokesperson on Finance, Ato Forson said the Minority side was denied the opportunity to “debate the amendment as proposed by the Chairman of the Health Committee.”

“We had a few concerns.Number one concern relates to the fact that as we speak, they have not been able to tell Ghanaians the cost of the drones per distribution and the cost for establishing one distribution centre. In fact the amendment was silent in that regard.”

Minority’s stance against the deal

The Minority in Parliament, had rejected the agreement outright, citing the fact that it was sole-sourced. They also demanded presidential intervention to halt the agreement.

“We've said it that this one, it is a rip-off. If even everyone supports it, me Cassiel Ato Forson will not support it because I think it is a rip-off. I think it is something the president must intervene in. The Vice President is leading this country unto a path of unrighteousness because obviously, we can use $27.8 million for something better,” the Minority Spokesperson on Finance, Cassiel Ato Forson said.

Mr. Forson also claimed that operating the services was going to cost the state $145,000 dollars monthly at each distribution centre.

The Minority Spokesperson on Health, Joseph Yieleh Chireh, also said the agreement was a misplaced priority. The Wa West MP said the amount of money that will be spent on this project could have been used to provide healthcare services for persons in deprived communities.

On the other hand, the Deputy Information Minister, Pius Hadzide, dismissed suggestions that operating the drone-delivery system for medical supplies at just four distribution centres for four years would cost the country $27.8 million.

Mr. Hadzide stated that the highest estimated cost of implementing the programme at each distribution centre is $88, 000, with rebates potentially reducing the amount by $11, 000.

He stated that the figures mentioned by Mr. Forson were a figment of the legislator's imagination.

“He speaks about the cost per centre being $145, 000. That is absolutely false. The cost per centre is actually calculated based on the number of deliveries that every centre is making. It has been categorized; if you make between 0 and 15 deliveries a day, at the end of the month, there's a charge that you get and that goes on to over a 100 deliveries. The maximum cost for 100 deliveries from a centre is $88, 000 at the end of the month, which is also open to an 11, 000 rebate if we pay on time. That brings the maximum cost to about $77, 000. I don't know where Ato Forson is getting his figures from. It's not in the agreement and only exists in his imagination.”

The Ghana Health Service (GHS) is in favor of the deal saying it is the most efficient and cost-effective means of reaching under-served areas in the country.

According to the Director General of the Ghana Health Service, Dr. Anthony Nsiah-Asare, the use of drone technology to deliver emergency services fits perfectly into government's plan of achieving access to Universal healthcare in the country.

Policy think tank, IMANI Africa, had also called for a review of the deal , adding however that flying blood and other essential medical supplies via drone technology will not do much to the country's health sector.

According to IMANI, “the Zipline contract that is being urged on Parliament by the Health Committee has actually expired on its own terms and needs to be urgently redrafted to reduce Ghana's risks.”

I don't recall we ever changing a leader in the middle of a ...
28 minutes ago