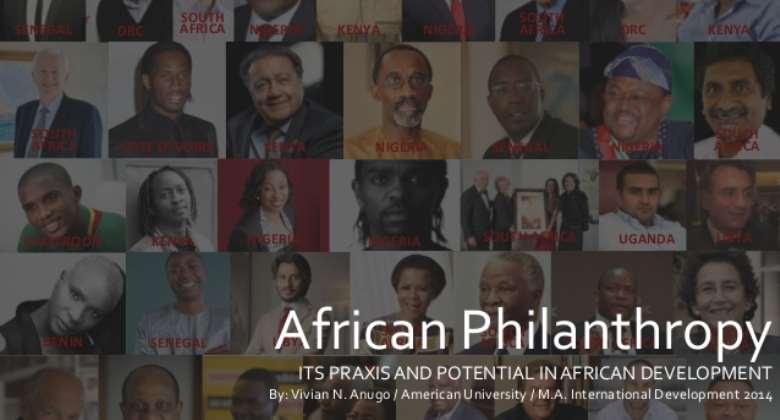 Foreign philanthropy going to Africa has been primarily through big corporations, global foundations, and multinational institutions. From the year 2000 until present, the Foundation Center reported the number of US foundations giving to Africa was 135 in 2002 and 248 in 2012. Their amount of funding was $289 million in 2002 and $1.46 billion in 2012. They gave to 36 of the 54 African countries. However, these figures do not include the in-kind forms of philanthropy that most Africans receive and depend on.

Domestic philanthropy from within Africa has been primarily through local foundations, community groups, and wealthy individuals. In modern day Africa, money is typically donated by way of high-net-worth Africans making donations to institutions or causes, local organizations finding ways to raise funds from a variety of sources, or a community pulling resources together to tackle their own challenges. These are all local solutions to deal with local problems. For instance, the Safaricom Foundation based in Kenya invests in various sectors, such as health, education, economic empowerment, water, technology, and disaster relief for its fellow Kenyan citizenry.

The most notable U.S. organizations that have given millions to billions of dollars to the continent include: Gates Foundation, Ford Foundation, Rockefeller Foundation, Open Society Foundations, Howard G. Buffett Foundation, and similar foundations. Many of these foundations choose to fund multinational institutions, such as the World Health Organization, which has several programs throughout Africa. While private foundations receive most of the attention for U.S. giving to Africa, tax exempt nonprofit charities that are based in the USA and have operations in Africa are also playing a significant role too.

The foreign philanthropic approach to Africa from non-Africans has been about providing funds and conducting research towards programs related to health, environment, agriculture, education, sanitation, hunger, family planning, disaster relief, and institutional capacity. The beneficiaries of such funds are children, youth, women, girls, people with disabilities, and people with HIV/AIDS. African countries that tend to receive more grants have been Kenya, Nigeria, Ethiopia, and South Africa.

The domestic philanthropic approach for Africa by Africans has been about providing human resources and doing grassroots work to solve problems related to health, education, economic empowerment, water, technology, and disaster relief. The beneficiaries of such support are unemployed women, underprivileged kids, needy entrepreneurs, disabled individuals, elder folks, and so on. The poorest African countries that need more help are Zimbabwe, Central African Republic, Democratic Republic of Congo, Burundi, Liberia, and Niger.

Foreign philanthropy tends to get more mainstream recognition. The U.S. has helped Africa with increasing access to food, energy and water. They have used an abundance of resources (academic and technological) to assist less privileged Africans. Ironically, Africa has plenty of food, energy and water to take care of itself. However, many Africans go hungry, thirsty, and lack electricity because of the global economy and distribution of resources tend to favor the developed world.

Domestic philanthropy tends to get less mainstream recognition. Africans in Africa have also helped increasing access to food, energy and water. Their able to utilize traditional funding methods (Harambees, Tontines and Susu) to assist those in Africa that are less privileged or impoverished (http://ayibamagazine.com/afrilanthropy-why-african-philanthropy-needs-its-own-name/). Although Africa has plenty of food, energy and water to take care of itself, many Africans go hungry, thirsty, and lack electricity because the local and global economy and distribution of resources are not typically in their favor.

The African Diaspora and its allies have a great chance to design and develop a future version of philanthropy that generates more prosperity in Africa. Reason being, the most effective form of philanthropy in Africa will most likely come from those that are deeply and genuinely passionate about engaging on-the-ground to empower the local communities to be integral players in progressive initiatives and programs.

The power of homemade philanthropy and its ability to bring positive change, to empower native Africans, and to develop long-term solutions that benefit everyone is central to Africa’s prosperous future. Control of this narrative is very imperative to future developments and prosperity of Africa, especially when it comes to attaining social impact and financial independence throughout the continent. Thus, the African Diaspora are in a pivotal position to use their cultural heritage and traditional African intelligence to package and deliver philanthropy that's much more effective and efficient than it is today. To be continued…

Tony K Ansah, Jr. is a self-published author, a public administrator by profession, and a social entrepreneur based in Rhode Island, U.S.A. He is also the founder and owner of Ansah Africa, a consulting and marketing startup established in 2017.