Paul Acquah Is African Central Bank Governor Of The Year 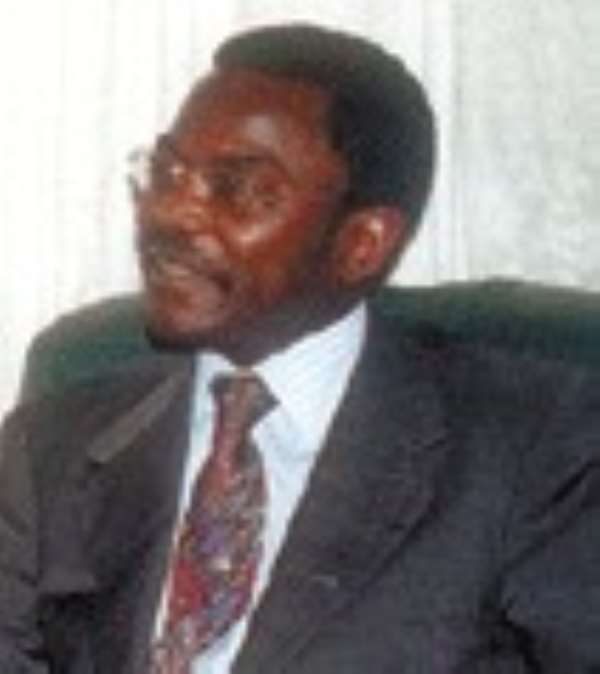 The Governor of the Bank of Ghana, Dr. Paul A. Acquah recently won the Emerging Markets award for the African Central Bank Governor of the Year. The award is based on nominations from investment banks, analysts and economists.

The contents of the Emerging Markets publication - the World Bank/IMF edition - released on Saturday, September 24, 2005 is attached for your information. THE EMERGING MARKETS WORLD BANK/IMF EDITION SATURDAY 24 SEPTEMBER 2005 CENTRAL BANK GOVERNOR OF THE YEAR PAUL ACQUAH, GHANA (The Emerging Markets award for Central Bank Governor of the Year is based on nominations from investment banks, analysts and economists)

In 2001, Ghana faced economic meltdown. Prices for gold and cocoa, the country's main exports, had dropped. The currency was on the verge of collapse, amidst a major surge in inflation and government spending. Into this scenario stepped Paul Acquah to take over the central bank. “I am very, very happy to be back in Ghana,” he says today, having spent the last 25 years in Washington DC.

As part of an ambitious new government, Acquah helped engineer reforms that quickly brought the country back from the brink of economic crisis to current growth rates of over 5%. In four years, the currency has been stabilized and single digit inflation is on the cards for 2006. A high degree of fiscal discipline, rapid changes in the banking sector and external help in the form of debt relief have been the ingredients of such success.

Getting the Bank of Ghana's house in order was a key challenge for Acquah. After a difficult legal battle, he has managed to cut staff levels at the bank by nearly 1,000 over the past three years. Acquah refocused the bank on its core mandate of price stability, rather than also concentrating on promoting economic development activities as was previously the case. To raise the intellectual and managerial capacity of the bank, the new chief made recruitment more competitive and also put into place an internal reassignment of personnel. “We now have a mix of new economics graduates from the University of Ghana, people who acquired the adequate skills in other ways and some staff that were recruited from abroad,” says Acquah.

The current challenge is to computerize the bank's systems and operations fully. The company to develop the package will be selected shortly, after a competitive bidding process is wrapped up. “The telephone system has now finally been completed,” the governor points out. The hurdles he faced upon taking up office, it seems, were not insignificant.

Acquah was born in Guabo, a village in central Ghana. He completed his first degree in economics at the University of Ghana and then left for the US to do a master's degree at Yale University. After a brief stint at the UN, Acquah took up his PhD studies at the University of Pennsylvania and on completion found his first job as a young economist at the IMF. Rising through the ranks, he eventually became deputy director for the Africa department in 1998.

Working at the IMF lent Acquah sufficient experience to help him, as central bank governor, stand his ground in negotiations with the multilateral institutions. “As a senior person in the Fund, you develop the knack to look at issues from the other's perspective,” he chuckles. He describes his government's relation with the World Bank and IMF as “very good and cooperative” and is keen to point out that Ghana's own solutions to economic problems are reflected in recent IMF reports.

Ghana's domestic economy is largely rural. Subsistence agriculture accounts for 41% of GDP and employs 60% of the work force, which consists mainly of small landholders. Cocoa, timber, and pineapples are the main export crops, while gold mining has become one of the biggest sources of foreign exchange. Around one-third of the 20 million Ghanaians live in poverty according to the World Bank, and life expectancy in the country is 54 years. Poverty reduction remains the central goal of the government.

For Acquah, this means consolidating the macroeconomic stability by building a strong banking sector with healthy, independent financial institutions. “We have to ensure a robust system so that the markets do not get the impression that Ghana is an unstable country,” he says. “The point has to be reached where people take economic stability for granted.” Only a stable economy allows for a vibrant private sector, which is at the heart of the government's economic growth strategy.

The next step in Acquah's plan to modernize the economy is to achieve full capital account convertibility, which allows unrestricted financial flows in and out of the country. Such flexibility would allow for rapid growth rates and increased foreign investment, which has risen rapidly in the past years. Ghana already has a very open trade regime, which has provided mixed results in the past, but could allow the country to benefit from greater access to developed country markets.

“Trade provides a more permanent platform for growth than aid,” points out Acquah, who hopes negotiations in the WTO will lead to a removal of agricultural subsidies in the EU and US. “Any increase in market access goes more to the heart of the problem than debt relief.”

Total debt forgiveness for Ghana has amounted to $3.5 billion in nominal terms under the World Bank's Heavily Indebted Poor Country (HIPC) initiative. Fulfilling the HIPC requirements was a priority for the new government, which also signed an agreement with Paris Club creditors in 2002 to reschedule the country's debt obligations. Last year, Ghana's external debt stood at nearly $8 billion. Public debt was also reduced due to better revenue generation through a tax reform, which, as Acquah puts it, “required a lot of debate”. Revenue collectors focus on the big tax contributors, and tax collection has become much simpler. “We established a VAT and created procedures to reach those taxpayers who together contribute over 60% of payments. The government also created incentives to the revenue agencies to mobilize their efforts,” explains Acquah.

The governor is keen to stress that fiscal stringency has not come at the expense of social welfare. “Domestic debt reduction is not an end in itself,” he says. “The government's policy has been rather socially sensitive. Of the recent increase in VAT, 2.5% is earmarked for the new national health insurance, which is a good symbol of this sensitivity.” The HIPC programme has allowed for increased amounts of money for the social sector, although it remains difficult to measure the results. “The issue is tracking the impact,” observes Acquah.

Looking to the future, the governor hopes to see Ghana's development inspired by the economic miracles of the so-called Asian tigers. “In ten years, I would like to see a modern economy, which is open and dependent on private capital inflows,” he says. Part of such openness is a push for regional integration in West Africa, for which a model, based on the concept of the European Union, already exists. Plans for integration provide a strong incentive to accelerate macroeconomic convergence and lower inflation. Firm benchmarks to bring down external tariffs for regional trade and achieve capital account convergence exist, but regional trade liberalization remains a difficult issue. The date to enter into a monetary union, originally set for 2005, has just been postponed for the second time to 2009.

With big and rapid changes on the cards for Ghana, Acquah hopes that the process will not come at the expense of some of the country's best qualities. “In Ghanaians there is an intrinsic solidarity built into human relationships and a great respect and tolerance for each other. I hope that globalization will take place at the same time as we preserve this rich tradition.”